Fined for going to a clinic during lockdown 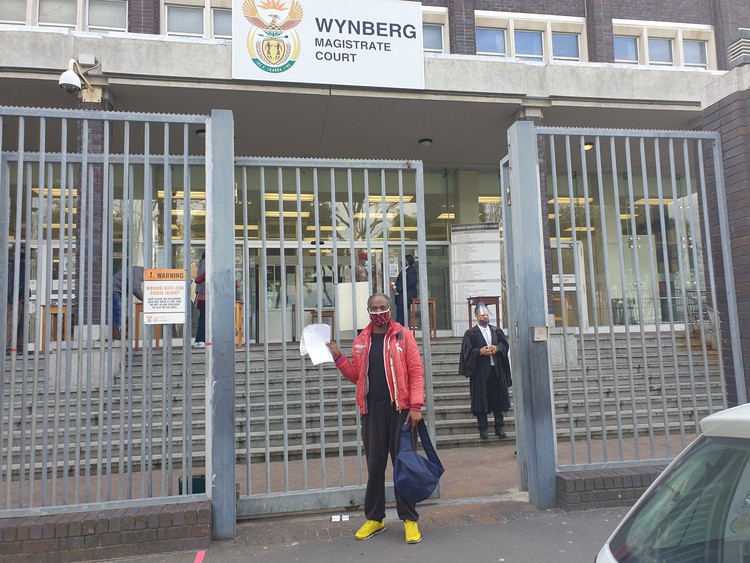 Gugulethu resident Belgrade Stuurman outside the Wynberg Magistrates Court. He wants to sue a metro police officer for emotional distress after he was fined for being outside during lockdown while on his way to the clinic to fetch medicines. The fine was scrapped. Photo: Mary-Anne Gontsana

Belgrade Stuurman from Gugulethu wants to sue a Cape Town Metro police officer for emotional distress. He was fined for being outside during lockdown while on his way to the clinic to fetch medicines for his chronic condition.

Stuurman went to the Wynberg Magistrate’s Court on Wednesday to dispute his fine.

He said he was stopped on the morning of 15 April by a metro police officer. “I was walking from Gugulethu towards Duinefontein Road to catch a taxi to Somerset Hospital in Green Point where I get my monthly medication. When I got near the Manenberg police station, I noticed a number of metro police vehicles parked on the opposite side of the police station.

“As I came closer and closer, an officer approached me and stopped me. He asked me where I was going. I explained to him that I was on my way to the hospital to get my medication.

“He clearly didn’t believe me because he said I was lying and that I was on my way to probably visit a friend. He then told me that I am not supposed to be outside because of lockdown. I tried to explain and showed him my appointment card, but he said he would give me a fine.

“I told him I was unemployed and could not afford to pay a fine, but he filled out the fine and gave it to me, warning me that I should be at the Wynberg court on 29 July,” said Stuurman.

Stuurman then continued on his way to catch a taxi.

He said when he was in the taxi, he read the fine and was so worried after reading a part that said if he failed to comply he may be arrested and imprisoned for up to three months.

“Since that day I have been so stressed thinking that I would be behind bars. I am unemployed and I cannot afford R1,000. I am also a sickly person and stress is not good for me,” said Stuurman.

Entering an almost empty courtroom — there were five other people there to pay or dispute their fines — accompanied by GroundUp, Stuurman’s case was never called.

Clearly nervous, when enquiring and producing the fine to the prosecutor, Stuurman was told to go to the ground floor of the court to get a case number. He did so and was later called by a man who appeared to be a correctional facility officer. The officer gave back his fine with another page stapled to it and told Stuurman: “There is no case number. You are free to go”.

Noticing that Stuurman was stunned and confused, the officer proceeded to joke: “Or you can pay the R,1000 if you want.”

The paper had all the details of the fine that was given to Stuurman, but a different identity number and a different name and surname. Further down on the paper it was written that the fine ticket number was “not found” on the system.

“This is absolutely unbelievable! What just happened? I have wasted my time. Do you know how much I have been stressing over this? The sleepless nights, my sister having to constantly console me and reassure me that everything will be alright,” said Stuurman.

“I had been nothing but compliant with the regulations during the lockdown period. Even now I am compliant. I stay indoors. I don’t have anywhere to go because I am unemployed. The one day I went out, and for good reason, I was fined.

“I admit that I did not have a permit then, but I had my hospital card. Even at the hospital I told my doctor what had happened and he wrote a note for me to produce in court.

“I am so angry with all this and I want to sue that officer. Someone needs to be held accountable for this.”

According to the City of Cape Town’s acting executive director for safety and security, Wayne Le Roux, since the beginning of lockdown law enforcement issued 13,901 fines, while the metro police issued 7,561.

On information on how many of these fines were actually paid or scrapped, Le Roux referred GroundUp to the National Prosecuting Authority (NPA).

Asked to comment on Stuurman’s threat to sue metro police, Le Roux said, “As instructed by the President of South Africa, the City has acted in terms of national regulations. The complainant would need to address the matter with the South African Police Service or the Department of Justice.”

Next:  Cows graze among the dirty nappies on Uitenhage dumpsite