“We didn’t ask for much. We really just wanted the basics – like higher wages, a toilet in the vineyards, clean water, and for all workers to be treated fairly. That is all,” says Betty Fortuin, a farm worker in the Cape Winelands.

Seven years ago De Doorns erupted in mass protests that quickly spread to other farming towns in the Western Cape. Thousands of workers from the small town and surrounding communities downed tools.

Fortuin was one of the strike leaders who handed over a list of 21 demands to farmers and the government in November 2012. This strike was seen as an historic event in the fight for farm workers’ rights. The result was a 52% wage hike, at least on paper.

Last week, GroundUp spoke to Fortuin and other farm workers in De Doorns. They say very little has been done to improve the lives of the vast majority of farm workers and farm dwellers in the seven years since the uprising. 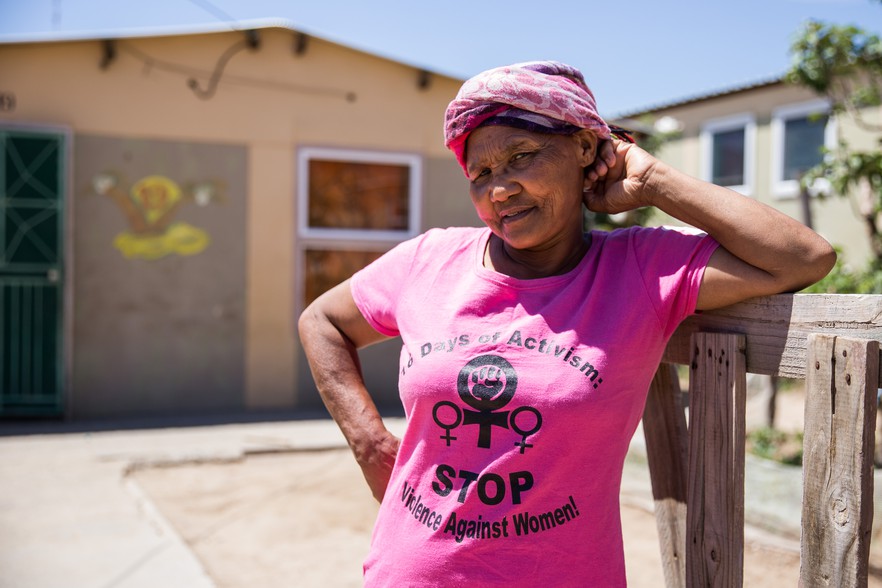 Betty Fortuin, from De Doorns, was among the strike leaders during the uprising in 2012. Photo: Ashraf Hendricks

Seated in the front room of her one-bedroom home in Stofland, a township in De Doorns, Fortuin, aged 57, recalled events. She said the protests started with a strike by about 300 workers on Keurboschkloof farm in September 2012. At the time, the lowest paid workers at Keurboschkloof earned between R90 and R130 per day. The workers managed to get an increase to R150 per day.

“When we saw they got it right, we started mobilising our permanent and seasonal workers because we also wanted that for our people,” said Fortuin.

“Farmers had already [sown] division,” explained Magrieta Prins. “They paid permanent workers R69 [per day] and seasonal workers R59 plus bonuses … We knew we needed numbers if we wanted to get attention [of farmers] so we went into the farms by force and that’s how our strike grew to 8,000 workers.”

“We were determined to get R150 per day, decent housing and protection on the farms … We also didn’t want to pay electricity on the farms in addition to house rent,” said Fortuin.

Prins said rent was being deducted from the salaries of several members of a single household. “I worked and paid R200 rent, my husband paid R200, and my daughter paid when she worked on the farm. At the end of the day, a household paid R600 for rent. Then you still have to buy electricity, which they [the farmer] also deducted from the wages. It was too much and people were left with nothing.”

“Since the strike, many farms have now installed boreholes for farm dwellers to use,” said Prins. “On Somerslus farm, the water is brown. We took a white bucket and tapped water in it and it was just brown. This is what they think of our people. Children, including my grandchild, are getting running tummies because of the water.”

When the strike began, a list of 21 demands was handed over to government and farm owners.

The workers’ 21 demands:
♦R150 per day wage ♦ Moratorium on farm evictions ♦ Full maternity benefits for all workers including seasonal workers♦ Housing contracts to include both partner’s names (securing tenure rights for women) ♦Workers to do 40 hours a week♦ Safe and decent transport to and from the farm ♦ Freedom of association (particularly union affiliations)♦No rent deductions for adult family members living in the farm house ♦ No deductions for water and electricity usage♦ Job grading and pay scale to be introduced ♦Provident fund ♦ Agricultural sector to set up bargaining/statutory council♦ Ban on labour brokers ♦Labour department to set up seasonal worker desk to track and service needs of seasonal workers ♦Interministerial task team to look into farm worker and dweller issues♦Child grant to be made accessible for farmworker communities ♦ Fund to assist with substance abuse, FAS and GBV♦Transformation of the agri sector ♦Free access to healthcare.

By the end of January 2013, tensions had begun to subside and after nearly four months without pay, workers returned to work.

“I will never forget the day a lady and her child came to my door to ask for R10 for bread. That was the last money I had as well. We couldn’t let people go hungry,” said Fortuin.

The strike had a significant impact on production.

“The police came in the way they did because they could see we were determined that we didn’t want to stop until we got what we wanted,” said Fortuin.

During the strike, Fortuin’s home was targeted by the police who made numerous attempts to arrest her. Police were accused of acting brutally against the strikers in 2012 and 2013. Archive photo: Anton Scholtz

The workers won a significant wage increase immediately. In February 2013, then labour minister Mildred Oliphant announced that the minimum farm wage would increase from R69 to R105 a day. Then in January 2019, the National Minimum Wage Act prescribed a rate of R18 per hour for farm workers, or R162 per day for a nine-hour day.

Jahni de Villiers, head of labour at Agri SA, said that the wage hike had “directly led to an inability to create more employment in the sector due to affordability issues”.

Since his election to the highest office in February 2018, activists and lobby groups have been calling on Ramaphosa to uphold this promise and implement the moratorium, but this has not happened.

Despite numerous promises by national spokesperson Phuti Mabelebele, GroundUp has received no response from the national or provincial departments of rural development and land reform on what has been done about farm evictions since 2012.

De Villiers said that all farmworkers were now entitled to maternity leave which could be claimed from UIF. “Changes to the Unemployment Insurance Act and regulations are in the pipeline this year to enable workers to claim more maternity benefits than previously, a welcome relief for workers and employers,” he said.

On the request for a 40-hour work week, Department of Labour spokesperson Teboho Thejane said legislation dictated that the maximum working hours are 45 hours per week.

De Villiers said that work weeks vary between 40 and 45 hours depending on a farm’s needs.

When asked about a worker’s right to associate with unions or organisations, De Villiers said, “Declining union membership numbers have the effect that services from unions have also declined, which leads to further membership losses. Employers cannot assist unions in any way other than adhering to the law, as union independence from employers is a requisite for registration. We feel that unionism will need an overhaul to have real success in the promotion of healthy labour relations in the sector, as the current model is clearly not working for unions.”

Farm workers had also asked that a provident fund be set up as well as a dedicated desk at the labour department to track seasonal workers.

Thajane said this was “deemed as a proposal and something we can look into but no clear directives have been developed”.

De Villiers said the Agricultural Sector Provident Fund had been set up and a marketing roadshow to employers across the country was planned for 2020.

Colette Solomon, director of Women on Farms Project, said: “The positive psychological benefits for farm workers of the strike cannot be underestimated.”

“Farm workers realised their power and the importance of unity and activism. They forced producers and farmers and the government to the negotiating table, and brought the harvest to a standstill. The strike achieved a historic 52% increase in farm workers’ wages. We are not aware of any sector which achieved such a massive increase through strike action,” she said.

But, said Solomons, there has been a backlash from farmers. She claimed there have been increasing farm evictions; more seasonality of labour, especially for women; farmers preventing trade unions from organising on their farms; increased mechanisation; a range of ongoing labour rights violations on farms; more farmers taking some of their land out of production to build luxury residential and tourist developments, resulting in further evictions and job losses on farms.

“These should also be seen in the context of certain legislative and policy discussions and changes, including the introduction of the National Minimum Wage and the national debate around land expropriation without compensation,” she said. 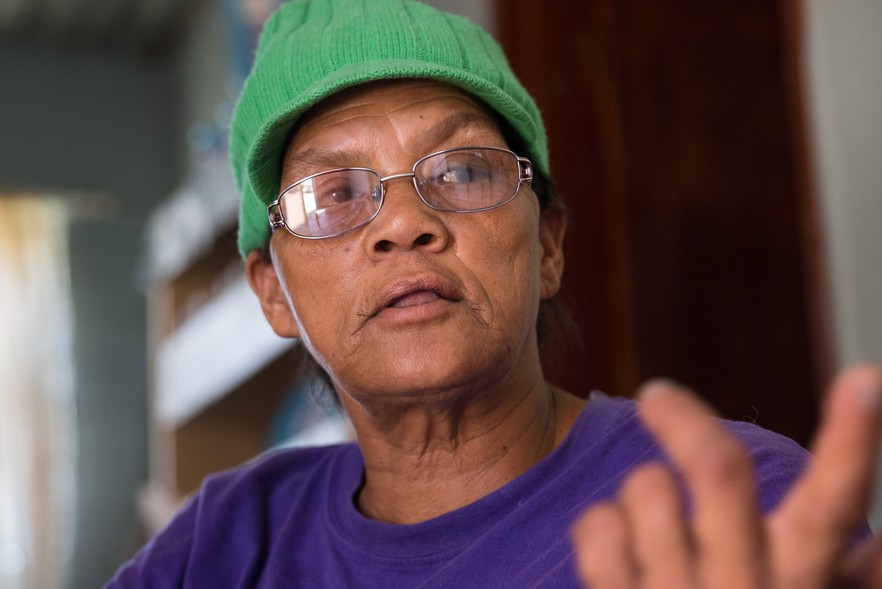 Magrieta Prins said that she would one day like to own her own farm. Photo: Ashraf Hendricks

Fortuin said that since the strike many farm dwellers now had access to water and had prepaid electricity boxes installed in their homes. She said plastic mobile toilets were also introduced, but were still located far from the vineyards where people work during the day.

Fortuin said that with less permanent staff on farms, workers are required to work longer hours to meet their targets. “If you don’t make your target, you will sign a warning notice and eventually be fired,” she said.

Else Lambrecht, a seasonal worker in De Doorns, said: “When the wages went up, farmers took fewer people … Most people are now seasonal workers. I am supposed to be working already from October but I’m still waiting at home for the call.”

“On paper, farmers can show that they are being compliant with the new wages but in reality they make so many deductions that people never see that money,” she said.

Fortuin believes that another mass strike by farm workers is on the horizon. “We are getting to a point where we will definitely see another strike soon. The new demand is for between R3,500 and R4,500, which would be R250 per day. We want to be equal with all the working class,” she said.

Both Fortuin and Prins dream of one day owning their own farm. 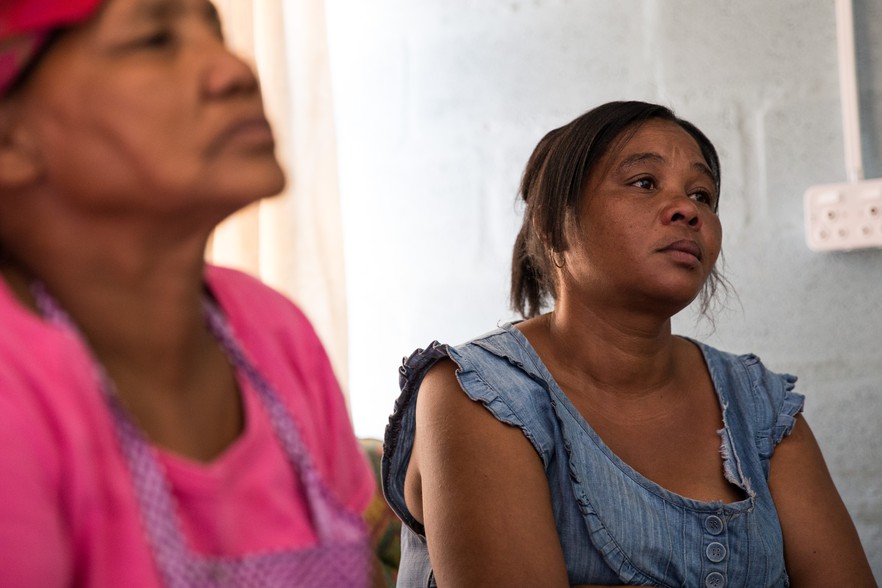 Else Lambrecht, a seasonal worker in De Doorns, said: “I am supposed to be working already from October but I’m still waiting at home for the call.” Photo: Ashraf Hendricks

Next:  Arcadia House: No solution in sight for families as demolition starts

Previous:  75-year-old SHAWCO to cut back activity after funding cuts