Farm workers in Grabouw strike for R250 per day

Farm workers from Oak Valley Estate and supporters from Grabouw blocked the N2 highway near Sir Lowry’s Pass on Monday. They demanded a wage increase to R250 per day, an end to labour brokering, and the removal of single sex hostels.

They have been on strike — organised by The Commercial, Stevedoring, Agricultural and Allied Workers Union (CSAAWU) — since 6 May. There is no agreement in sight.

“Farm workers can’t live on R162 a day,” said Karel Swart of CSAAWU. “The money that the workers bring home into the community is not enough for the community to survive with.”

He said that workers wanted the hostels demolished and replaced with family homes. “Oak Valley is a big company and we want them to make land available to build houses and to restore our human dignity.” He also said that labour broking was making “white farm owners rich” but “it keeps wages low”.

When GroundUp arrived at the scene at about 10am, the protesters had already dispersed. They were moving through the township towards Ou Kaapse Way near the centre of Grabouw. A trail of rubber bullet casings lay in the street and several public order police officers were patrolling the outskirts of the township. SAPS and traffic vehicles were on the scene.

In a statement, Oak Valley said that it fully complies with the National Minimum Wage Act for both permanent and seasonal workers. According to the statement, the average wage for permanent employees is R273 a day, and R234 per day for seasonal workers. The company also provides free services such as transport to and from work, and rent-free housing on the farm.

Oak Valley said it would not enter into negotiations with CSAAWU until the union represented at least 50% of the farm’s workers. Currently it represents about 28% of workers. Oak Valley said that labour brokers were common in an industry where seasonal workers were required.

Christopher Rawbone-Viljoen, managing director of Oak Valley Estate, said about 65 out of the company’s 233 permanent workers were on strike. He said CSAAWU members “have threatened and intimidated workers, preventing them from coming to work”.

At the entrance to the estate, a security guard was stationed, not in uniform. He said that he had to dress casually to get to work safely.

Elaine Magalie, who said she was an Oak Valley employee, said workers were earning too little. “We are asking for R250 a day and we are currently getting R162.“ Magalie had been working on the farm for over five years, she said. She has to look after two children and her parents. She said she can’t do this on her current wages. She said she spent R1,000 on transport monthly alone (although Oak Valley says it provides free transport).

Rawbone-Viljoen said Oak Valley Estate had no record of Magalie as a permanent or seasonal employee. 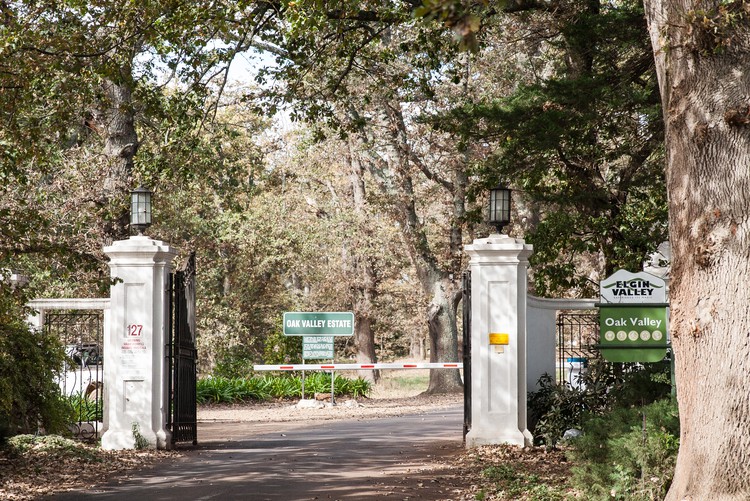 This article has been updated with additional comment from Oak Valley Estate.

Next:  “We are tired of being a charity township” Alexandra inquiry told