“How unfair is that? It’s a joke,” says resident 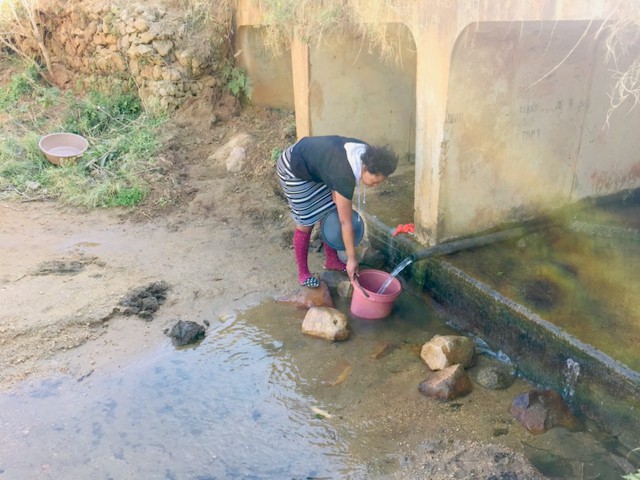 Phume Zuma fetches water from under a bridge on the Mpethu River in Swayimane outside Pietermaritzburg. “One of the residents made a plan by inserting a pipe,” resident Sane Mazibuko told GroundUp. Photo: Nompendulo Ngubane

More than 50 families drink dirty river water from under a bridge in Mpethu location in Swayimane, 41km outside Pietermaritzburg.

Although they have eight jojo tanks, three months can go by without them seeing the water truck meant to fill them, according to residents. They say the tanks only benefit a few and runs out in days.

“We have Nagle Dam in the area, which supplies water to big cities such as Durban … We should not be suffering for water. There is a big source of water … How unfair is that? It’s a joke,” said Thulani Msomi.

Residents said they were promised communal taps in 2014. “The water project started in Mbhava. It never came to us,” he said.

“It feels like we are living in a foreign country,” said Sane Mazibuko. She said they have often found dead dogs and cows in the water. “We take them out, and continue drinking because we have no choice. People from the upper area wash clothes and some bath in the river. All the dirt comes to us in the lower part and we drink that. Sometimes you would find human waste on the river side.

“In order to get clean water before it is messed up by people or animals, one has to be in the river by 5am in winter or summer. We don’t know how we don’t get sick from drinking this water,” said Mazibuko.

Bongani Majola said, “Water from the river is not always guaranteed. During the drought season, the river becomes dry. We have to make a plan by looking for streams in the forest where we can dig for survival.”

The community also struggles to access other basic services. The clinic is over six kilometres away, a struggle for the elderly on foot. High school learners have no choice but to walk 8km for Masijabule High School in Mbhava location. There is one small van for scholar transport, but some parents cannot afford it. The roads are in a bad condition.

Phumlile Dlamini said the toilets are falling down and some are full.

“Going to shop in Pietermaritzburg is not easy. It has to be six people or more, then a taxi would come. Once the number is gathered, we call a driver to come and collect us. If the number is less, we wait until more people will be going to town,” said Dlamini. She said sometimes they wait days to gather enough people.

UMgungundlovu District Municipality spokesperson Brian Zuma said the reservoir in Bruyns Hill had been upgraded by Umngeni Water, but the problem is a municipal pump station and a pipeline that needed to be upgraded before all areas can be supplied with standpipes to receive water.

He said a tender of R51 million was awarded in January for the Mbhava and Mpethu-Swayimane water supply scheme extension. It included the upgrades to the pump stations and also access roads.

He said there were challenges delivering water by tanker due to interference by some communities.

Zuma said a contractor to install toilets was also appointed in January and the process is ongoing throughout the municipality.

Next:  Magistrates court currently convening in a car park