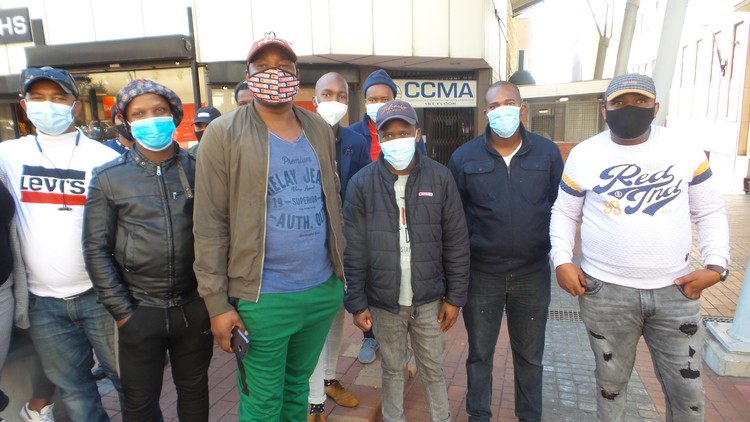 Some of the 33 former Spar Distribution Centre workers in Gqeberha who were dismissed for gross misconduct. Photo: Joseph Chirume

Dismissed Spar Distribution Centre workers in Gqeberha have been found guilty of “gross misconduct” and violating a court interdict against them. This is according to Commissioner Bulelani Busakwe at the Commission for Conciliation, Mediation and Arbitration (CCMA).

Commissioner Busakwe found that “The evidence [before him] proved on a balance of probabilities that the employees gathered at Kohler Road before 8:30am, blocked Kohler Road, directly or indirectly threatened members of the public and fellow employees, and brought the name of the employer into disrepute.”

Busakwe conducted an investigation into the misconduct of the Spar workers, who participated in a six-week strike in March this year. Workers had demanded a salary increase of 8.1% and the employer was offering 3%. The workers said their distribution centre branch paid a salary of R5,300 per month while other centres paid about R12,500.

The 36 workers were suspended with pay since 29 April, pending the outcome of the CCMA proceedings. Only three of these employees’ suspensions were not upheld by the CCMA last month. The three are allowed to return to work.

Busakwe, in his ruling on the matter, explained that Spar Eastern Cape Distribution Centre had asked the CCMA to conduct an inquiry into allegations of misconduct by its employees.

Spar argued that the employees failed to comply with the picketing rules and a court interdict issued subsequently. This conduct, Spar said, constituted gross misconduct.

However, Berito Juku, provincial organiser of the Transport Retail and General Workers Union (THORN), said, “The problem started on 29 March 2021, when several youths and residents of ward 30 joined the worker’s picket. Workers explained the picketing rules, but could not agree with community members. The community started burning tyres at 6am. The workers were to be there at 8am.” The union has also raised concerns with the CCMA process.

Human Resources Manager for Eastern Cape Spar distribution Mandisa Mbikwana said, “The matter was referred to the CMMA. We have received the outcome from the commissioner and will abide by it.”

Next:  Rural families battle to get water although they live near a dam