Remaining protesters given a choice: reintegrate or repatriate 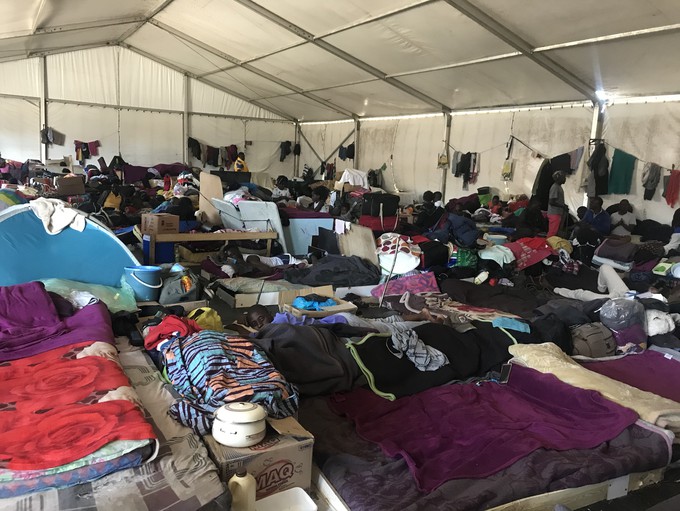 Life at close quarters for the protesting refugees living at the Paint City site in Bellville Photo: Tariro Washinyira

Two leaders of the protesting refugee groups that occupied the Central Methodist Church in Cape Town have been deported to their home countries, according to Minister of Home Affairs Aaron Motsoaledi at a 19 April press briefing.

Motsoaledi announced that 41 people from the groups at Paint City and Wingfield Military Base in Cape Town, including leaders Aline Bukuru and Papy Sukami, were deported two weeks ago from Lindela Repatriation Centre in Krugersdorp. Motsoaledi said that Bukuru’s husband, Jean-Pierre Balous, would also be deported once his court proceedings had run their course.

Motsoaledi announced that following a review, the Department of Home Affairs (DHA) had found that 382 of the 1,583 people living in the two sites did not qualify for refugee status, and their cases were under review by the Standing Committee for Refugee Affairs (SCRA). Of these,174 cases had been finalised.

Of those remaining who did qualify for refugee status, 121 people had opted for repatriation to their country of origin, while 390 people had accepted local resettlement.

Minister Motsoaledi said that the United Nations High Commissioner for Refugees (UNHCR) had offered protesters three-months rental and food if they chose to reintegrate locally. Another UN agency, the International Organisation on Migration (IOM) had also offered a plane ticket to protesters who wished to return to their country of origin.

However, a number of the people in the groups have declared that they would not settle for either option. Minister Motsoaledi repeatedly emphasised that the sites at Paint City and Wingfield were not “refugee camps”, as South Africa strictly follows a policy of non-encampment for refugees and asylum seekers, and that there was absolutely no possibility that people in these groups could achieve resettlement to a third country, such as Canada.

Motsoaledi said that offers to the groups for resettlement and repatriation were final and would expire at the end of April, at which time the services at the two sites would be withdrawn. Those refusing to leave would be dealt with by law enforcement, said the Minister.

The closure of the Paint City and Wingfield sites would bring to a close a saga that has divided opinion in South Africa’s refugee community. The protest by the refugee groups first started in October 2019, and made headlines across the country when they staged a sit-in at the UNHCR offices in St George’s Mall, Cape Town. When the protesters were removed in a chaotic operation, they were given shelter at the nearby Central Methodist Mission. Later, the group split, with one part moving to Greenmarket Square. Then, after the Covid-19 lockdown was announced, in April 2020 a police operation removed those living in the church to the site at Paint City, with the other group sent to Wingfield.

Next:  Community health workers confront Mkhize with memorandum of demands

Previous:  Groundview: The Cape Town fire is an urgent reminder to offer solutions to homeless people