Police used pepper spray against people queueing on Friday for the Covid-19 grant. The grant is due to end on 31 January. Photo: Nombulelo Damba-Hendrik

Police used pepper spray against people queuing for the Covid-19 grant at the Mdantsane Post Office in East London on Friday, as all over the country beneficiaries rushed to collect their grants ahead of the expiry on Sunday.

The South African Social Security Agency (SASSA) has said new applications for the grant will be closed from 1 February 2021, but people who applied in November, December and January and whose applications were rejected will be able to apply for reconsideration until 28 February.

More than 6.4 million people have been receiving the grant.

At Mdantsane Post Office, about 3pm, there were about 300 mostly young people queuing. Some were pushing to get into the door and police used pepper spray to disperse them.

Anelisa Binqo said she had been queuing outside this post office since 6am and when she arrived others who had spent the night were making fires.

“If I don’t get the money tomorrow I will have to wait till 9 February,” she said.

Calvin Mnyamana said the Post Office staff only allowed 20 people inside at a time and the process was very slow. “This is sad because this month is the last month and I only received this R350 twice. For months I have been coming here, but it’s always full,” he said.

When police used the pepper spray people only dispersed for a few minutes then gathered again next to the door.

At Port Elizabeth’s main post office, a notice informed beneficiaries that outstanding grants would be paid until 26 February. But people in the queue, some of whom said they had been queuing for more than ten hours, were determined to get their grants on Friday.

Mervin Smith, from Kleinskool, said he had arrived in the post office at about 5am. ”We sleep against the wall. We all thought that 31 January is the deadline, but they told us as long as we were approved, we can come again next month.

Nomalungelo Kinikini said she came all the way from KwaNobuhle, Uitenhage, to Port Elizabeth. “I am here to accompany my daughter, who is owed four months outstanding money.”

Eastern Cape SASSA spokesperson Luzuko Qina said, “We will continue paying up until the last person approved is paid, which is beyond 31 January. “Beneficiaries must just be patient.”

At Algoa Park Post Office, about 250 beneficiaries were queuing at midday. Some had brought chairs. Some were sharing cigarettes.

Estellin Jacobs of Arcadia said, “I have been queueing here since 4am. The time now is 12:15pm but only 30 people have been served so far. It is my date to get my money.

“If I don’t get this money today. I will die of hunger with my four kids. The food I have at home will only last us for this weekend.”

Kirsten Hektoor of Windvogel said he was supposed to get his money on Wednesday but the post office in KwaDesi had said it was not available. “I decided to come here and check for it. But everyone is panicking now because the service is very slow. The office will close at 4pm but most people have not been served.”

“This morning I had a last porridge with my wife and two kids.”

Sherwin Abrahams of Timothy Valley said, “The last time I had food at home was on 3 January. I am depending on my aunt to dish up for me when she has cooked food at her house.

“I should have received my grant on Wednesday. But I was told the money was not available. Today I am just trying my luck by coming here.” 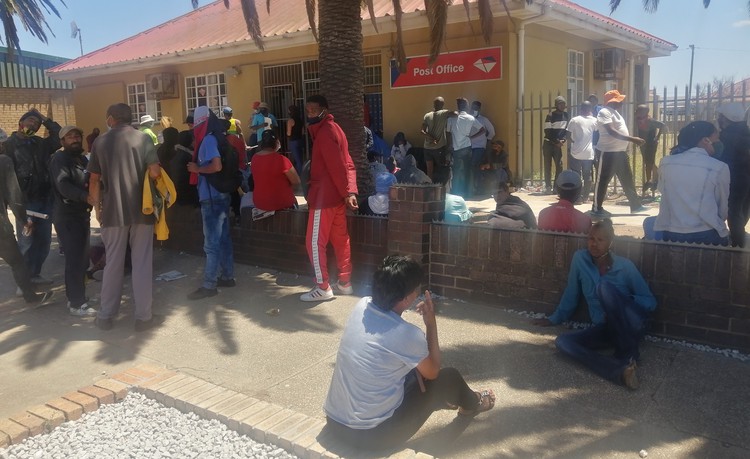 Some beneficiaries in Port Elizabeth had been queueing since 4am. Photo: Mkhuseli Sizani

Mncekeleli Buwa was at the Market Square Mall Post Office in the city centre to check if his January grant was available.

“I know the situation and I woke up at 4am. There are no taxis at that time and I decided to walk even though it was very dark outside. I wanted to be on the front of the queue and be served early. But when I arrived here at around 5am there were already people in the queue,” said Buwa.

Nomisile Ntonto said she was there for the second day running. “Some people say they check their status online on their cellphones. But mine is not a smartphone and I have to come here to check every month. And now this month I heard that it is coming to an end. So I don’t want to miss the opportunity of getting the last payment. My legs are already tired and painful now. I was here even yesterday but it was closed before I came in,” said Ntonto.

At Joza Post Office, people had come by donkey carts and cars very early in the morning. Mzukisi Madinda was very far behind in the queue. He said he was desperate to get the last R350. “How are we going to survive without it?”

“I am not sure even if I will get it today because of this long queue. I have heard people saying we will not be getting it if we miss today or tomorrow. That is why I am here. I want the money because I am not working,” said Buwa.

In Marshalltown, Johannesburg, Nomvula Mbele said she’d left home in Soweto at 3am to arrive at the post office at 5am. “I come to collect my money here because the service is much better,” said Mbele who is unemployed and has been using the Covid-19 grant money to buy stock that she can sell as a trader.

“People from Orange Farm, Tembisa, Soweto and even Alexandra come to Marshalltown because they know they will get their money,” saids Moeketsi Mokoena from Orange Farm. “Unlike where I live, the officials here do not choose who they help; they help everyone.”

Several civil society organisations have called for the grant to be extended and increased but there has been no official response from the government. The Department of Social Development’s Sharlene Naiker told GroundUp on Friday the department did not know whether there would be an extension, but it is expected to be discussed at this week’s Cabinet lekgotla. The lekgotla started on Thursday and is due to conclude on Saturday evening.

Naiker said a statement would be issued after the lekgotla. 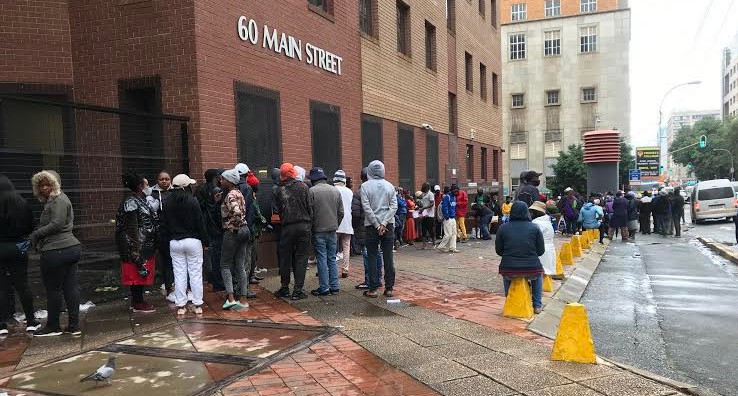 Next:  Doris Mathebula walks 12km a day to fetch water because the municipal boreholes don’t work