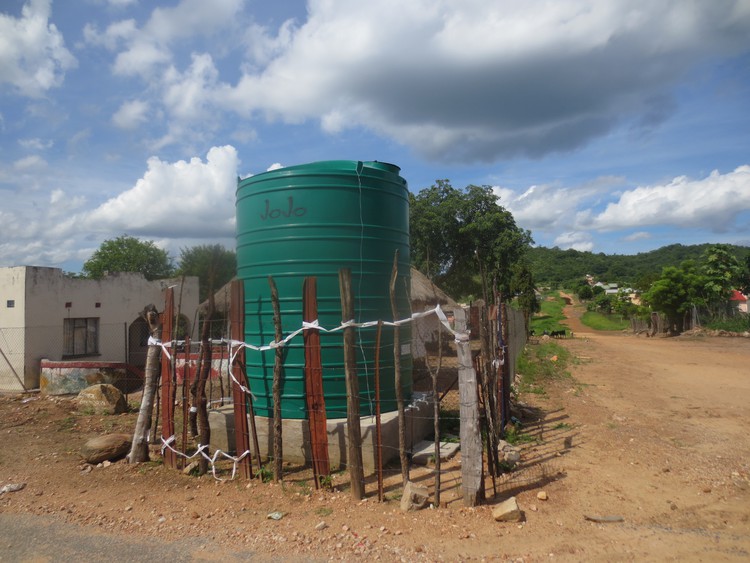 This 10,000 litre jojo tank in Basani village stores water brought in tanks by the municipality but residents say this is not enough for everyone. Photo Bernard Chiguvare

Others might dread the floods but for villagers like Doris Mathebula in Giyani, Limpopo, the heavy rains are the only way to get enough fresh water. When it doesn’t rain, Mathebula has to make three trips a day to fetch water from taps in a village 2km away. Yet she lives about 500m from two boreholes that are not working at all.

“I have been staying at this place since 2014. These boreholes were drilled years back. One of them worked for two years and stopped, the other one never worked at all,” says Mathebula, who lives in Mavalani village.

“They drilled a lot of boreholes in different villages but most of the boreholes are not working at all,” said Chauke.

Mavalani has over 4,300 households according to Chauke. There are five boreholes that are supposed to be providing them water.

But Odas Ngobeni spokesperson for Mopani District Municipality said four had been vandalised and the fifth, drilled last year, had not yet been electrified by Eskom.

This leaves some of the villagers walking far to fetch water, while others resort to buying from households who have drilled their own boreholes.

“We are a family of four and we need a lot of water,” said Mathebula. “I have no option but to make trips to the nearest village. Everyday I have to make three trips. I carry three 25litre containers per trip in a wheelbarrow. By the end of the day I feel very tired and wonder when the boreholes will be fixed,” said Mathebula.

The more than 1,000 households in Basani village are praying that the heavy rains continue.

“We were very happy for the past few days (22 to 23 January 2021) when we received heavy rains in our area,” said resident Tinyiko Nwanukeri. “We captured the water in buckets and really we are assured of a good bath.” Otherwise the villagers have to buy water from other families who have boreholes, paying R2.50 for a 25litre container.

There are four boreholes in Basani. According to Ngobeni, one has dried up, two are waiting for electrification and one is working. But Nwanukeri said none of them are working.

“We have been unable to get Eskom to work much faster,” Ngobeni said. He said the municipality was now examining the possibility of using contractors accredited to Eskom. Meanwhile, he said, the municipality would continue to bring water in tankers to the villages. But residents say the tanker comes only once a month.

“The water delivered is not enough for everyone. Usually the drivers of the trucks promise to come back the following day but that has never happened,” said resident Lisbeth Mangany.

Next:  Covid-19 and ivermectin: SAHPRA reaches settlement with Afriforum

City of Polokwane also without water for days

It is not only villages in Limpopo that is without water. The City of Polokwane has intermittently been without water for the past two or more years. Some high-lying neighbourhoods are often without water for several days or weeks due to unreliable provision of water by water trucks. If you do not have a back-up water tank and pressure pump system on your erf, you are doomed in this city. This is what happens when no planning for future demand and no maintenance of existing water infrastructure are done by the municipality, the utility Lepelle Northern Water and the Department of Water & Sanitation.