Immigrant shop owners say they are victims of extortion 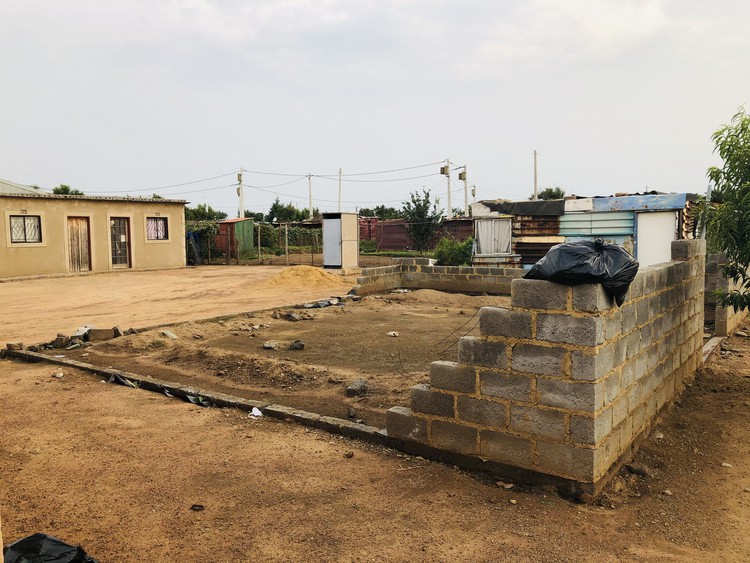 Laban Mohamed Ahmed was forced to halt construction of his spaza shop after he was attacked by a group of people demanding bribes from immigrant shop owners. Photo: Kimberly Mutandiro

The community of Tsakane in Gauteng remains tense amid ongoing clashes between residents and immigrant shop owners.

In October last year, a fight apparently broke out at a new Somali-owned shop in Malandela Street, in Extension Six where gunshots went off. After the shooting incident, some residents met and reportedly decided that no additional shops would be allowed.

Residents allege that there is a group in the community extorting immigrant shop owners — asking them to pay a fee in order to operate. The person willing to pay the highest rate is often the one that is allowed to open, they say.

GroundUp spoke to some immigrant shop owners, or prospective shop owners, who say they were bullied and chased away.

Laban Mohamed Ahmed says he lost over R50,000 after he was prevented from operating in October. Ahmed says that he entered into a lease agreement with a property owner in Extension Six to open a shop. He paid a rental deposit of R3,000, then spent more money on building sleeping quarters and buying material which he intended to use in the store.

But as he started renovating, he was assaulted by a group of people who told him to leave the area. The incident was reported to Tsakane’s CPF office.

Ahmed says his attackers accused him of creating competition for other spaza shops and supermarkets in Tsakane. During the attack, his money and personal documents were stolen. Ahmed says he is too scared to return to the area, fearing that his life may be at risk.

“I’m struggling to survive because I lost money trying to open a shop. All l wanted was to operate my own business so l could look after my family back home in Somalia,” he says.

Ahmed says he is desperately trying to recover the money he paid to the landlord to help feed his family.

According to a statement by the Tsakane Community Policing Forum, several incidents have been reported to police, including Ahmed’s case. The Forum said it will soon meet with all the shop owners in the area to address the problem.

“Cases reported concern some Bangladesh, Ethiopian and Somali nationals. There have been incidents where the shop owners claim to have paid bribes to individuals in the community to operate shops. In some cases violence is reported to have escalated,” the Forum said.

About five kilometres away in Extension 19, Omar Ali and his partner say they signed a similar agreement with their landlord last year. They were asked to pay six months of rent upfront. They started building the shop in June. As renovations were completed, Ali too was approached by a group of people who wanted him to pay them a fee before his store could start operating.

Ali says he lost more money trying to pay various people who all claimed to be in charge. “In total l lost R20,000, including the rental deposit. When l asked the landlord to pay me back, he said he had also lost out in the process.”

Bhekizizwe Ngobese, Ali’s landlord, said he wanted to honour his agreement with Ali but community members had teamed up with other shop owners to stop him from operating.

“This has become a territorial power issue because immigrant shop owners in our area are from Ethiopia. They paid money to some community members to stop Somalians from opening shops near them.”

“The community committee is split over the issue and those stopping my shop have been paid hefty bribes,” Ngobese says.

Tsakane Police spokesperson Sergeant Lerato Mngomezulu said that the CPF has been dealing with issues relating to immigrant shop owners in the community. She said no formal charges of extortion or victimisation have been made against community members. Mngomezulu urged the victims to come forward with information.

Next:  Court stops Mpumalanga coal mine

Previous:  Marius Fransman, the Cape minstrels and the Lottery millions