Ultimate Protection and Control has failed to pay R300,000 owed to workers as compensation, says lawyer 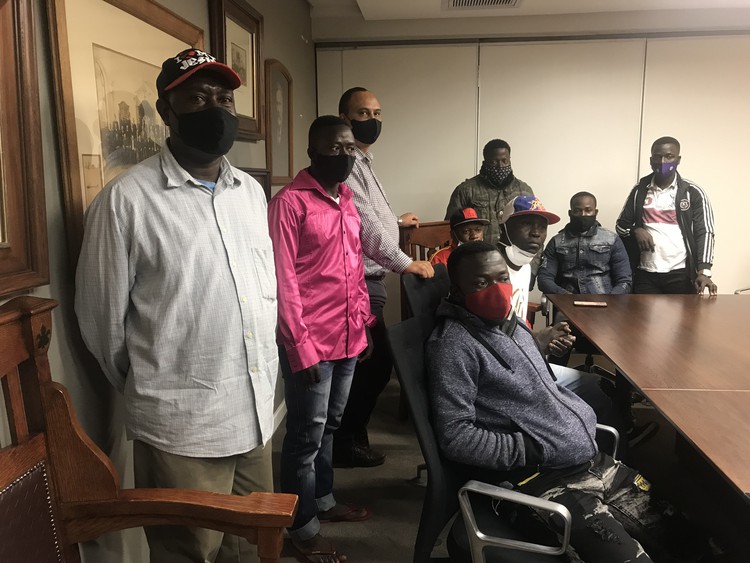 Some of the security guard dismissed by Ultimate Protection and Control, a Cape Town-based security company, with their lawyer Charl May. They are taking the company to court after it allegedly failed to fulfil a CCMA agreement ordering the company to compensate the workers for being unfairly dismissed. Photo: Tariro Washinyira

A group of security guards are taking a Cape Town-based security company to court to compel it to pay money owed to them for being unfairly dismissed last year.

About 18 workers received letters from management at the company, Ultimate Protection and Control (UPC), notifying them that their contracts had been terminated in February 2021.

The group then sought assistance from the Africa Revival Foundation who referred them to an attorney before heading to the Commission for Conciliation, Mediation and Arbitration (CCMA) on 23 March 2021.

According to the CCMA’s arbitration documents, the company had agreed to make monthly payments totalling R300,000 over a six-month period from August 2021. But, the guards claim, the company has failed to make the first payment into an account set up by Attorney Charl May, representing the workers.

The award was for compensation for what was ruled as unfair dismissals, unpaid salaries for the last month they worked, unlawful deductions from their wages, unpaid overtime, and public holidays.

When payment had still not been made by December, the workers’ lawyer requested that the Sheriff of the Court attach some of the company’s property like furniture items. But the value of the items found on the property did not equate to the value of the settlement.

“The company didn’t either pay or respond after we extensively communicated. We sent the sheriff to attach property but the sheriff only found R3,000 worth of goods. Our way forward is to make a court application so that a court can order them to pay,” May told GroundUp. He said they are waiting for the court to allocate a hearing date for their application.

May believes the company’s decision to terminate the workers’ contracts follows a move by the Private Security Industry Regulatory Authority (PSiRA) to clamp down on companies using undocumented immigrants in the security industry.

“Whether the contract is unlawful or not, immigrant workers still need to be treated fairly. An employer can’t just terminate a contract of someone who has been working there for more than five years without paying money owed to the employee,” said May.

Meanwhile, the workers have had to scramble to find jobs, though most of them remain unemployed.

Lola Lema Momba, 40, from Kinshasa, Congo said he had worked for UPC since 2016. Workers were paid R200 per shift and earned about R4,400 per month. “Sometimes they would ask me to work without getting time off while they looked for a replacement but never paid me overtime for extra hours worked.” He currently works at his friend’s barbershop to help support his three children.

PSiRA spokesperson Sharon Matiapoto said that in cases where companies are found to be “deploying unregistered security officers for the rendering security services”, the Authority registers an Improper Code of Conduct docket against the business and its officials.

“During the 2020/2021 reporting year, the PSiRA Law Enforcement division worked closely with the [police] in dealing with such allegations. This resulted in 47 operations which led to 875 arrests, as well as 1,377 criminal cases registered against non-compliant security service providers,” said Matiapoto.

GroundUp first sent emails to UPC Managing Director Danie Van Wyk and Marius Smuts, both mentioned in the CCMA matter, on 17 January. A reminder was sent on 7 February. We also called the company again on Monday and Thursday, and spoke to an employee who only identified herself as Carmen. She said she had passed on the message to the relevant person. No response was received at the time of publication.

Next:  School’s dream dashed as donor fails to pay up