“This has become a home for many of us”

Waste pickers at the New England Landfill site in Pietermaritzburg say every week people from across KwaZulu-Natal and even from outside of the province come to join the village they have established at the dump.

They call it “Ehlathini” (the forest), located on the Msunduzi River, which separates it from the dump site. It is home to about 300 people and has a Zulu and Sotho-speaking section. In the Zulu-speaking section there are also immigrants from Zimbabwe, Malawi and Lesotho.

“Shacks are mushrooming every week,” says Neli Xulu. She came from a village in Kranskop and started work as a waste picker in 2009.

“I was working as a domestic worker earning R600 a month. I had lost my parents five years before. Taking care of my two children and four of my late sister’s children was not easy … I left the domestic work and came here.”

She collects iron and sells it to scrapyards. She says she can sometimes make R3,000 in two weeks.

“There was no other option than to build myself a shack,” she says. “Travelling [to and from Kranskop, where the children remain] and renting would have been hard. Living here saves a lot of money for me.”

Most of the shacks in Ehlathini are made out of cardboard and plastic materials.

“I wake up around 4am in the morning and go to work. Around 9am I come back with some items. I have breakfast and go back. My items are safe here because we know each other … I now have a Sotho man as my partner. Having a boyfriend benefits me because it prevents my stuff getting stolen,” says Xulu.

Sboniso Dlamini, from Sobantu township, collects plastic containers. He has a shack in the Zulu-speaking section, but he says access to water and toilets is a problem.

“The whole community uses one tap. The tap is far from the shacks. Sometimes the tap will run dry. We have to travel to Sobantu and ask for water from people’s homes. Walking to Sobantu is about six to seven kilometres from the dump site. Some of us have toilets. Others share toilets. Those who don’t have toilets, use the bushes,” he says.

When it rains, he sleeps at his home in Sobantu, because he fears flooding from the river.

People, such as Alfred Mokoena, have seen other business opportunities at the dump site and its village. He lives in the Sotho-speaking section and owns a tuck shop selling cigarettes and liquor. Mokoena’s place is where residents come to relax.

“I’m also a waste picker. I collect cardboards … This has become a home for many of us. I visit home in December and my friend would take care of the business [tuck shop] when I’m away. On other months I send money home,” says Mokoena.

A woman sells fast food from a green container in the middle of the dumpsite on a narrow road. She didn’t want to be named.

“I sell fish, fried potatoes and cakes. Fish and chips are R25. My cake prices vary. My business has survived for four years,” she says.

Nonhle Mthembu, from Stanger, is one of a group of six women who collect bricks. They come to the dump site twice a week. They hire a truck and bring cooler boxes filled with ice and soft drinks. They also sell different brands of cigarette. While selling their goods they collect bricks to sell in town.

“All the money is put together. We save it in a bank account. In December, we divide the money for Christmas and school uniforms for our children. It is not easy. Some days are harder than others, but we are surviving,” she says.

Msunduzi Municipality spokesperson Thobeka Mafumbatha says waste pickers are not permitted to live in the area. She says the land invasion unit has been to the area and they are addressing the matter. 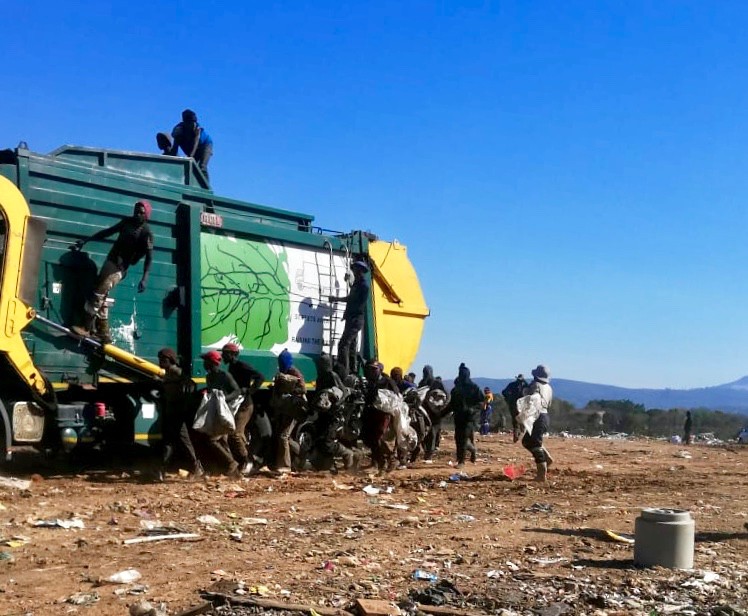 The New England Landfill site is the centre of an informal economy. Photo: Nompendulo Ngubane