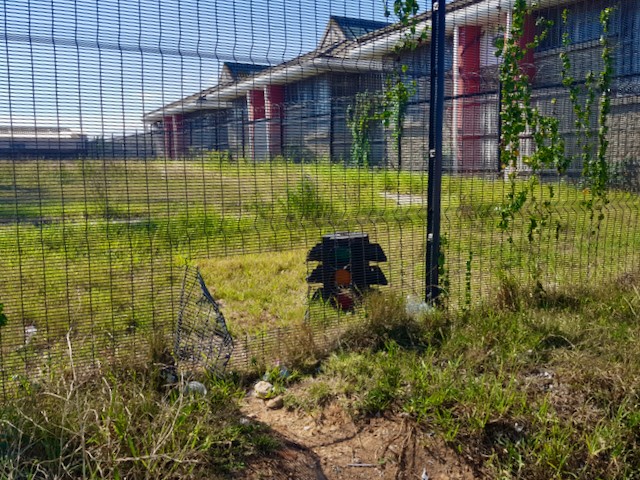 A model traffic light that was uprooted inside the yard of the Motherwell library was dumped close to where criminals cut a hole in the fence. Photo: Joseph Chirume.

Four libraries that closed in Nelson Mandela Bay Municipality in 2020 will not reopen any time soon. They were targeted by criminals during the Covid lockdown.

Due to the pandemic all public libraries in the metro were closed from March 2020 until August 2021. A limited service was offered at first and eventually at some libraries offered full use of their facilities again this year. But the Allanridge, KwaMagxaki, Chatty and Motherwell libraries have never reopened because of vandalism during the lockdown period.

Municipal spokesperson Mamela Ndamase said, “For now we can’t say when the facilities will reopen to the public as the damage was extensive.”

Ndamase said the roof and the ceiling at Motherwell needed to be replaced and there had been serious water damage caused by rain.

The Chatty and Motherwell libraries used to provide crucial services to visually-impaired people.

Community members in Motherwell recently volunteered to clean up their library.

“The library looks marvellous and intact from outside but that is not what it looks like inside. It is virtually empty and crumbling inside … There is a need for extensive refurbishment,” said one volunteer.

She said criminals had removed the plumbing and ablution facilities, the electricity conduits, and even ripped out bricks from walls and stole windows.

The traffic training facility for learner drivers at the library, with its model traffic lights, had also been wrecked.

“I don’t know what people think when they steal these model traffic lights. They are destroying the future of their children because the facility was meant to teach learners how to drive,” said a man who lives near the library.

Nokukhanya Monde, a third-year computer engineering student, said, “I used to study at the library when it was operating. Its continued closure has affected hundreds of students who used to either study or borrow books from it.”

She said students had also depended on the library’s internet access. “I am really struggling to study and to do my assignments. I have to borrow money to go to New Brighton library. I hope the municipality will quickly fix the library.”

The municipality did not respond to our questions about why there had been no security personnel to guard the facilities.

Previous:  “I struggle to study because I’m thinking about where my next meal will come from”