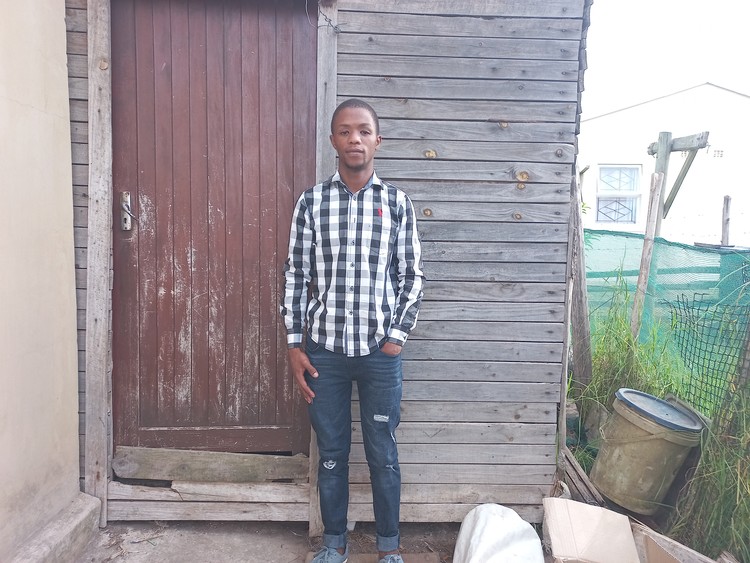 Student Qama Tsewu shares a one-room shack with his cousin and a friend. The trio are among hundreds of students at the South Cape Technical and Vocational Education and Training College still waiting for their NSFAS allowances to be paid. Some can’t afford to buy food or travel to campus. Photo Siphokazi Mnyobe

A cup of sugar, half a bag of flour and an onion: this is the only food Qama Tsewu, a student at South Cape Technical and Vocational Education and Training (TVET) College’s Bitou Campus in the Western Cape, has left until the end of the month. His mother is unemployed and lives in the Eastern Cape. She will have to borrow money so he has something to eat and money to travel to college.

Tsewu is one of 600 students at the college who rely on allowances from the National Student Financial Aid Scheme (NSFAS) to pay for food, transport and housing. Earlier this month, scores of students from the college’s Bitou Campus protested at the campus demanding that the allowances to be paid. Students GroundUp spoke to said they had not received their allowances since classes started.

Tsewu said he had not received his R2,800 accommodation allowance. Unable to pay student residence fees, Tsewu moved in with his cousin, Babalwa Tsewu, and a friend from his village, Nkosinathi Fila. They are all students at South Cape and share a small one-room shack. Tsewu said they share toiletries and food and often rely on the financial support of about R500 sent by his friend’s family.

“I struggle to study because I’m thinking about where my next meal will come from,” he said.

Another student, Zikhona Moses, had to move in with relatives who live nearly 26 km from the college campus in Kurland. She said her landlord had cut the electricity to her flat because she was struggling to pay rent. “It was tough studying in the dark on a hungry stomach.”

Moses spends R50 a day travelling to college and has been borrowing the money from her uncle and aunt. The taxi drops her at Plettenberg Bay Taxi Rank in town and she has to walk about 6 kilometres to the college.

“My relatives work at a local restaurant and don’t earn much. They also have a family to look after, so coming to stay with them is already a burden and I can’t expect them to pay for my transport as well,” she said.

A Student Representative Council member who did not want his name mentioned said problems with the college’s application system had caused the delay in processing funding applications. Until this technical glitch is resolved, NSFAS is not able to pay the allowances, the SRC member claimed.

In response to questions from GroundUp, Refilwe Molufi, communications officer at South Cape, told us that all questions should be directed to NSFAS.

NSFAS had not responded at the time of publication.