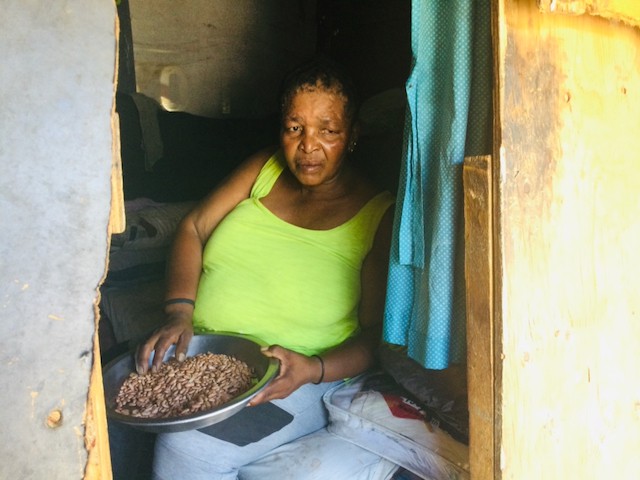 Mushroomville resident Maria Tulo pays for her children’s education with the money she gets by selling to recycling companies the things that people throw away . Photos: Kimberly Mutandiro

Letsie Makelelo has been living on the Lyttleton farm in Centurion for six years. She makes a living by selling garbage to recyclers. She sends much of the money she makes to her children in Lesotho. “This is how l pay for my children’s school fees. If they move us to a place where we will not be able to work, what will my children do?” she asks.

Makelelo and her fellow occupiers call their informal settlement Mushroomville. Some of the occupiers say they have been there for ten years. Some are originally from Lesotho. The settlement is near the Hennops River and in danger of flooding.

But the occupiers are on private land and Mushroomville’s time may soon be up. Last year June, in a strongly worded judgment that criticised the way both the occupiers and the Tshwane municipality conducted the case, Judge Frans Fabricus of the Gauteng High Court found in favour of the landowner, Turnover Trading.

The court ordered the eviction of the occupiers within 30 days and for the municipality to provide emergency temporary accommodation at Sunderland Ridge, with water and toilets. The municipality also had to assist with relocation. The City also had to find out the immigration status of the residents and, if applicable, help them apply for housing.

The owner of the land, who wishes to develop a hotel and conference centre, argued that he would lose up to R35 million should he fail to execute his plan. He has already concluded a contract with an international hotel chain.

The legal battle has dragged on for at least three years. During that time the settlement has grown from 30 to over 200 people. Most residents earn about R2,000 to R2,500 a month from recycling, and they do not want to be moved away from where they can make this living.

Lawyers for Human Rights (LHR) is representing the occupiers. Louise du Plessis of LHR said that the municipality wants to move Mushroomville’s residents 7km away to an industrial area “where they will not be able to work”.

“All we ask is that they be moved to a permanent place where they will be able to work and feed their families,” said du Plessis.

The Constitutional Court turned down the occupiers’ leave to appeal the June ruling. But they have won a brief respite. It appears the municipality did not carry out its part of the June order. So LHR went back to court and on 16 March the Gauteng High Court ordered a variation to the June judgment, stating that the eviction may not be carried out until the municipality complies with the June order.

Maria Tulo, a mother of three, has been on the land for over ten years. She was originally employed when the site was still a farm. “Even if l wanted to leave where do l go to? I have been waiting for government housing for years. When l think of paying rent l get so stressed. The small money that l make selling recyclables is spent on my children’s college education.”

Letsie Makelelo says she has been living in Mushroomville for six years, sending money to her children in Lesotho.

Next:  Cape artists protest against lack of government support

Overflowing sewage and no refuse collection in Makhanda