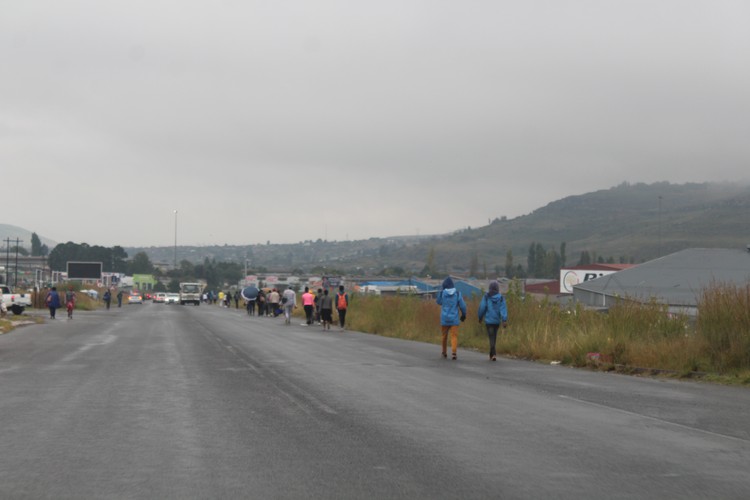 Commuters in n Qwaqwa in the Free State have been forced to walk in and out of town in the rain since Wednesday. This after taxi drivers blocked all of the entrances to prevent cabs without permits from operating. Photo: Yamkela Mopeli

Disputes over taxi routes in Qwaqwa, Free State has left dozens of commuters who rely on their service stranded for two days.

At least two taxi drivers were attacked on Wednesday when members of the Qwaqwa Union Taxi Association (QWAUTA) shut down the town, blocking cars without permits from operating in the area. This included formal transport for those going to work or school.

The shutdown started on Wednesday, with taxi drivers from QWAUTA blocking all three entrances into town with their private cars.

The drivers say they have for years been fighting with metered and informal private cabs who operate on their routes.

The provincial Department of Police, Road and Transport spokesperson, Hillary Mophete, said the province has a one town, one association policy. Should any operator wish to get a permit, they first needed to join the relevant association.

A taxi driver, who only identified himself as Thabang, said taxis with permits were losing money and customers to the growing number of operators without permits.

“We feel that is not fair because we are the rightful owners of these routes. They take people on the roads while we are waiting for them at the rank. Commuters prefer them to us,” he said.

Commuter Lerato Motaung, a nurse at Mofumahadi Manapo Mopeli Hospital, said she has battled to get to work because of the action.

“I work 10km from my home and there is no way that I can walk to work. I have to stand on the road whether it’s raining or not, hoping to catch a lift from a colleague or to beg a passing taxi driver to give me a lift,” she said.

Victor Mchunu, owner and manager at Four Plus One cab taxis, admitted that he has been operating without a permit for the past six years. Mchunu said QWAUTA refuses to allow his taxis to join the association.

“This is the second time we have had such a shutdown. Even then we told [taxi drivers] that we do not have a problem joining the association so we can have permits but they give us no information. Instead they attack us and prevent us from operating. We have families to feed just like them,” he said.

Matshediso Nteo, chairperson of QWAUTA on Thursday said that the MEC for Transport was in Qwaqwa to try and restore calm.

When asked about the attack on the two cab drivers, Nteo claimed that the incident was in retaliation for one of their own drivers being assaulted.

Nteo said that they have since agreed to allow vehicles with permits and official Free State license plates to operate.

Next:  Centurion recyclers battle against eviction

To claim 70% of government works who have permit in Efs

I am one of the taxi owners in Qwauta and am writing on behalf of all taxi drivers who were protesting for two days complaining about the 70% of piracy being used by government works in Qwaqwa. They asked for help several times but no response came from the government, so they said enough is enough. It is hard to work in Qwaqwa because law enforcement officers don't do their jobs right and just help the misdeeds continue. The Chairperson of Qwauta should call an urgent meeting with MEC Sisi Ntombela to help the association about those government workers who do fraud and hide that operating inside the association and outside the association. Please MEC Ntombela help our association before taxi drivers kill lots of people and damage the cars.