The National Arts Council says R68.4 million has been paid to 512 beneficiaries as part of Covid-19 relief 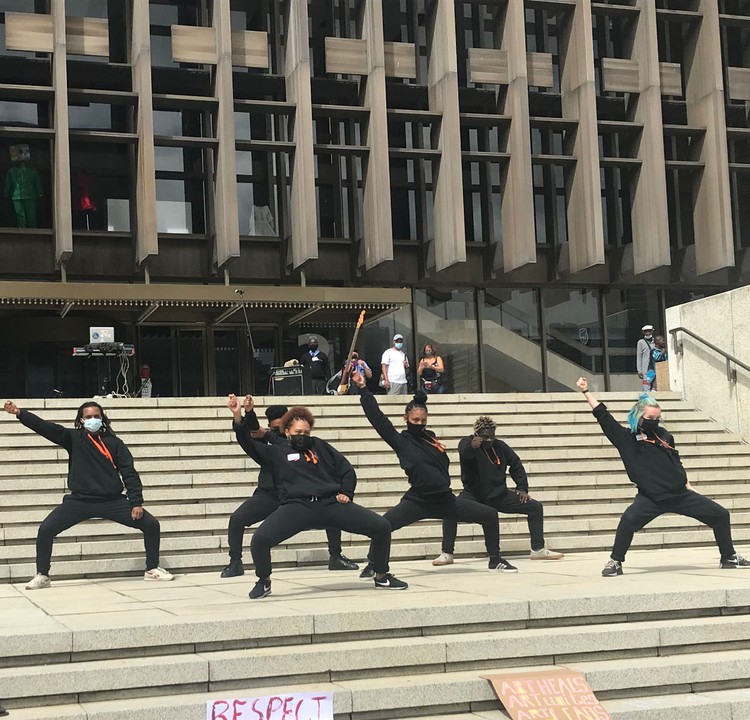 Members of the Jazzart Dance Theatre perform on the steps of the Artscape in Cape Town in solidarity with artists who have been protesting at the National Arts Council offices in Johannesburg. Photo: Marecia Damons

The steps outside the Artscape Theatre in Cape Town were a hive of activity on Saturday, with about 50 artists, musicians, dancers and puppeteers performing as part of ongoing protests.

They are demanding better relief funding for all performing artists struggling to make ends meet during the Covid-19 pandemic. Performers have been staging sit-ins at the National Arts Council (NAC) offices in Johannesburg since 3 March 2021. They are demanding answers over the management of the relief funds and the Presidential Employment Stimulus Programme (PESP).

In October 2020, the Council handed over R300 million as part of the PESP. The funds were meant to assist with job retention through a wage subsidy. While a second package was aimed at creating jobs through projects that could create income opportunities, according to the NAC.

At the end of February 2021, the NAC announced that the R300 million was “oversubscribed” and “insufficient”. Despite approving funding for 1,374 applicants, the budget could only accommodate 613 beneficiaries (a beneficiary could be an organisation that has to support many artists). This led the Council to reduce the amount initially promised to ensure that all 1,374 applicants benefit from the PESP funds.

During a briefing on Friday, the NAC’s Dr Sipho Sithole announced that R68.4 million has been paid to 512 beneficiaries to date. He said that a further R216 million will be distributed soon to the remainder of the beneficiaries who had applied for funding.

Over the past month, the Department of Arts and Culture and the NAC have been engaging with artists through online meetings. But artists believe this is not enough.

“The NACs refusal to meaningfully engage and answer queries on the PESP matter has caused much frustration and anger amongst the arts community,” said the protest organisers in a statement.

Musician James Kibby who performed during the protest with the band Terrarium said that he earns a fraction of his income doing livestream shows. After five months of applying for relief funding through the NAC, he received R10,000 in August 2020 and has not received any more money since.

“I also have to consider regular expenses like basic groceries and paying rent. But now that one amount they paid is what I’m supposed to survive on for a whole year?” he adds.

Musician Lynden Campbell said, “It’s really disgusting how the government hasn’t helped most people but has generally given no assistance whatsoever to musicians in an already suffering industry.”

Next:  A year in a settlement created by Covid