2,000 students have three toilets and one tap 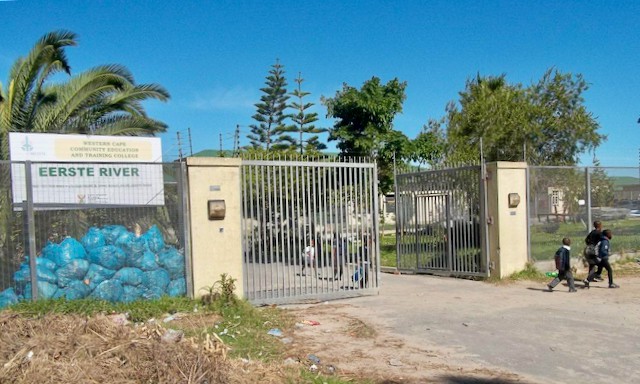 For about two months, the community-created Mfuleni Combined School has been holding classes for about 2,000 learners not placed in government schools. It is currently run by 52 volunteers.

The school is “illegal”, says the Western Cape Department of Education, and as a result it cannot support it with funding or teachers.

The 2,000 learners, girls and boys, of all ages, and the volunteers teaching them, all share three working toilets and one tap. The toilet stench can be smelt in the classrooms.

Sipho Majozi, a member of Mfuleni Combined School teachers’ steering committee, says, “Learners go to the toilets and spend the whole period standing in the line outside the toilet. When they return to class, the lesson is finished.”

Mpho Diphane, who is also a member of the committee, said the school often experiences water cut-offs during school hours. “Learners must go home as we speak because the water tap has stopped producing water,” Diphane told GroundUp when we revisited the school in late April.

He said it is especially bad on hot days. “Learners get restless in class and become difficult to teach because they can’t get water to quench their thirst,” said Diphane.

Majozi said he wants the government to fix the damaged toilets and provide extra mobile toilets to prevent crowding. He said they were worried about the spread of Covid-19 in their current circumstances.

Electricity is also a safety issue. There are live wires but missing plugs.

Rubbish is also piling up. “The City of Cape Town has not collected rubbish since February … Not a good environment for learning and teaching,” said Siphelo Mahlombe, who volunteers as a cleaner.

Bronagh Hammond, spokesperson for the WCED, said, “If the conditions are indeed as you have described, then that is concerning.”

“However, we again appeal to the leaders of this institution to work with us so that we can place learners in a safe and legal school,” she said.

“We have attempted, on numerous occasions to obtain the details of the learners so we can place them accordingly. We are again attempting to do so … We need certain information so that we can identify the learners’ correct grades and previous schools.”

Hammond said the department had also received reports from schools in the area that some registered learners were taken out of their schools to attend Mfuleni Combined, something that community leader Letho Dlali denies.

“We moved around the township and shouted over a loudhailer to parents to bring their unplaced learners to the new school. The department failed the learners,” said Dlali.

Meanwhile, Ishmael Mnisi, spokesperson for the Department of Higher Education and Training, said the 28 students evicted when the building was occupied in February, have been placed at Delft Community Learning Centre. It is far from their homes, he said, and as a result they have to use more than one taxi to get to it.

He said the provincial education department, the higher education regional office, and college management had met with the community of Mfuleni on 9 March and 9 April to try and find a solution.

Next:  Protesters set fire to electricity poles in Kariega

Previous:  Education department back in court over pit latrines