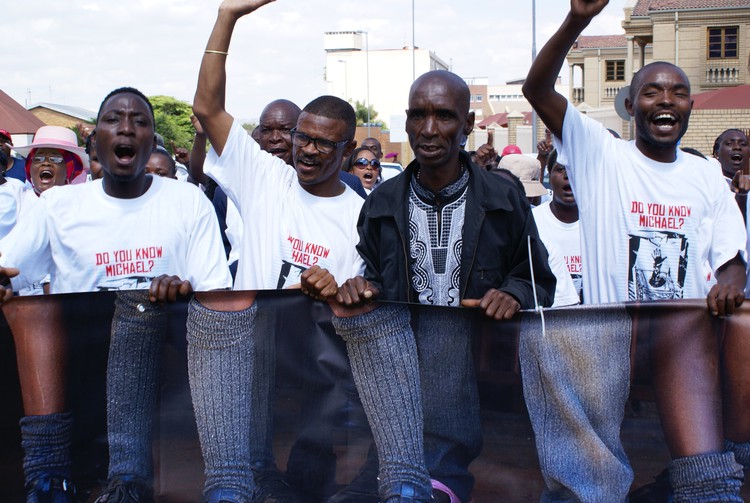 A protest in 2017 outside the Polokwane High Court over pit latrines in Limpopo schools. James Komape, father of Michael, who drowned in a pit latrine on his second day of Grade R, is wearing a jacket. Archive photo: Ciaran Ryan

The legal fight to eradicate pit latrines at Limpopo schools continues this month with public interest law centre SECTION27 returning to the High Court to demand that education authorities craft a coherent plan to do away with dangerous and undignified lavatories.

SECTION27 is challenging claims by the Limpopo Department of Education and the Department of Basic Education that it can only install safe toilets at schools in the province by 2030. We have tried to get comment from the department to verify if this is what it has said, but at the time of publication had not received a response.

The court action has been ongoing for six years already.

“This is unconstitutional, and we are demanding that the education authorities craft a plan for the eradication of pit latrines that is coherent and meets their obligations to realise the right to basic education immediately,” SECTION27 says.

The court hearing will be held on 24 May in Polokwane.

The court granted a structural order in 2018, forcing the two departments to report back on progress, following the death in 2014 of five-year-old Michael Komape, who drowned in a pit latrine on his second day of Grade R when the dilapidated structure caved in. (Komape’s family were later awarded R1.4 million in damages by the Supreme Court of Appeal.)

In terms of the order, the departments were put on terms to supply each school in Limpopo with safe and dignified toilets, to conduct a comprehensive audit of sanitation needs, detailing the names and locations of all schools with pit toilets in the province, and provide a comprehensive plan for the installation of new toilets.

The departments filed an affidavit in August 2018 and another progress report in May 2019.

In its heads of argument, SECTION27 says neither report provided accurate data on the situation on the ground, did not provide a clear and coherent sanitation plan, and made no adequate financial provision for the required upgrades or for those in urgent need.

SECTION27 says the tragic death of Komape was not an isolated incident and at least three other learners, nationally, had lost their lives due to dilapidated toilets.

“In the face of a crisis requiring urgent intervention, as well as the court order, the defendants have persisted in their failure to take steps to prevent a recurrence of these tragedies.”

It says the department had identified 1,658 schools with “sanitation needs” of which 1,489 had pit latrines.

And yet the so-called plan only envisioned pit toilets being removed by 2030.

It says only a handful of schools have been earmarked for interventions before 2030 and there was no explanation as to why certain schools had been chosen and others not.

SECTION27 says this is unconstitutional. The departments were ignoring their legal responsibilities and were in breach of the court order.

It wants the court to order that the MEC set up a “sanitation task team” within two weeks, headed by an independent expert, to verify, update and ensure the accuracy and currency of the data on pit toilets.

Further, it wants an order directing the MEC to file a revised action plan within 45 days.

“While conditions of unsafe, unlawful sanitation infrastructure endure at schools, learners’ rights to basic education, equality and dignity are jeopardized,” it argued.