“Let there be darkness for all” says man 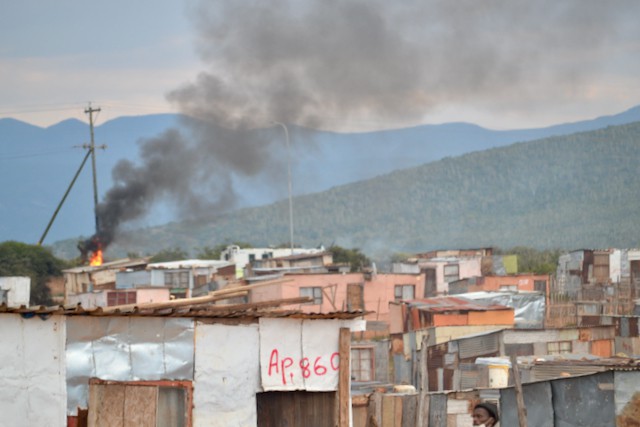 Hundreds of informal settlement residents in Gunguluza Area 11 in Kariega, Eastern Cape, protested for electricity in the early hours of Wednesday morning.

At least five wooden electricity poles on busy Rocklands Road were set alight. One resident carrying a stick shouted, “Let there be darkness for all.”

The protesters are demanding electricity for 3,000 shacks, and that they be given erf numbers to replace the Area Phase (AP) numbers written on the sides of their shacks.

The protest erupted after dissatisfaction with a mass meeting that had been called for Tuesday, at which there were meant to be Mayco officials for housing and electricity. The meeting was called after shack dwellers stopped the electrification of temporary houses last week.

However, only Ward 45 Councillor Siphiwo Plaatjies (ANC) turned up to meet the residents at 3pm. Plaatjies had a letter from the mayor saying he would bring a delegation on 26 May.

Two Mayco members and several councillors admitted to GroundUp that they were afraid to set foot in Area 11 because of the violence.

Residents were angered at the three week delay for the meeting. Protests started at 4am Wednesday. Plaatjies’ office was looted and torched. A vehicle on Rocklands Road and a municipal bakkie were also set alight. Police used rubber bullets and tear gas.

Plaatjies had not yet responded to a request for comment at the time of publication.

Next:  Black donors needed to help save lives