Schools shut down in Mfuleni by protesters 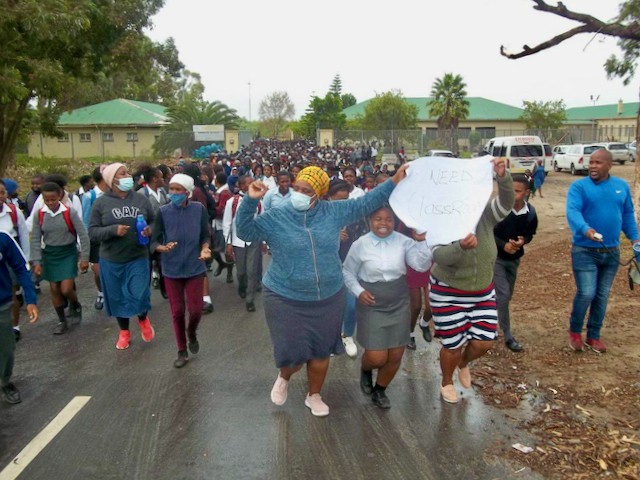 Over a thousand learners from Mfuleni Combined School and about 50 parents shut down Bardale Primary and other schools in Mfuleni on Wednesday. Photo: Vincent Lali

Over a thousand learners from Mfuleni Combined School and about 50 parents shut down Bardale Primary School and other schools in Mfuleni on Wednesday.

Although unrecognised, Mfuleni Combined School accommodates over 2,000 learners unable to find placement in other schools in the area. Community volunteers manage this new, unregistered school, which was previously the Western Cape Community Education and Training College.

Community leaders asked the Bardale principal to allow the singing and toyi-toying learners and parents in, but no one opened the school gate. As rain poured down, learners banged on the gate, shouting “open”, and then removed a section of the school fence.

Community leaders tried to restrain the protest, but some learners stoned teachers’ cars and also a passing Golden Arrow bus.

“We want the department to register the school and recognise it as a legitimate one so that it can be treated like other schools,” he said.

Community leader Sibongiseni Mapatalala said, “We want learners attending other schools to feel the same pain as the new school learners who don’t get proper learning and teaching.”

He said the WCED has set land aside for the construction of a new primary school in Mfuleni. As this school is yet to be built, they want its status to rather be allocated to the new school “so that it can be allowed to operate legally”, said Mapatalala.

Community leader Letho Dlali said, “Since the school is not registered, learners can’t get legit first term reports. They can’t even use their school reports to gain admission at other schools.”

“Once WCED recognise the school as lawful, the learners would be able to get a feeding scheme, stationary, sanitisers and school equipment.”

Fundiswa Khwezi, a parent who joined the protest, said, “I wanted my daughters to be close to me and study where I live. I looked around for a school for them but failed to find it.”

“My daughters say their teachers do their job properly,” she said.

Spokesperson for the Western Cape Education Department Bronagh Hammond said, “There is a group that has illegally occupied the Rosendal Department of Higher Education Training centre and have created an illegal ‘school’ … They have ‘employed’ teachers and have even created an SGB.”

Hammond said, “The WCED has received reports from schools in the area that some registered learners were taken out of schools to attend this illegal school” and it was “an attempt to strong arm the WCED into creating a new school.”

An earlier version of the article misspelt Mr Matutu's name.

Comment from the Western Cape Department of Education added.