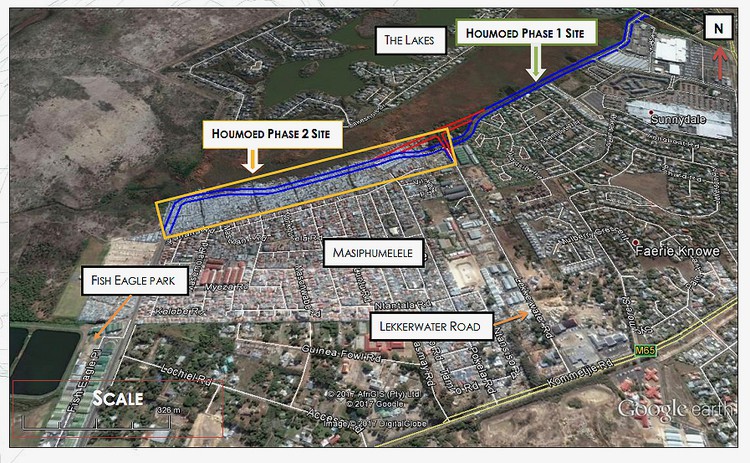 Environmental approval has been granted for the construction of a new road that will facilitate a long-awaited upgrade and relocation project affecting about 2,500 homes in the wetlands informal settlement area of Masiphumelele, Cape Town.

But an appeal against the approval has been filed and must be adjudicated before any work can start.

The wetlands informal settlement area lies to the north of Masiphumele’s densely-populated formal housing area. Many of those living here, some since the 1990s, are former “backyarders” who have built shacks on illegal infilling or on stilts within the permanent wet zone that is part of the greater Noordhoek wetlands system

Residents are living here under appalling conditions where they face major health and safety risks. According to the road project documentation, water in this area has become polluted, degrading the wetland, and diarrhoeal diseases are a significant and constant problem among residents, particularly children.

Fire is also a “constant and significant risk”. The densely packed shacks, the lack of road access and limited water resources make firefighting operations difficult. In July last year a massive blaze, reportedly started after a candle was knocked over, swept through E Section of the informal settlement, destroying 256 shacks and leaving an estimated 1,200 people homeless.

The upgrade has been very slow in coming.

Environmental authorisation for the upgrade project – formally called the Houmoed Avenue Extension: Phase 2 – and the associated upgrading of parts of Masiphumelele was finally issued by the provincial environment department on 25 March, just two days before the country entered the Covid-19 lockdown.

In its authorisation, the province said it was “critical” for the informal settlement to be upgraded as living conditions here were “undesirable and unacceptable”.

Community leader and chairperson of the Masiphumelele Civic Association Tshepo Moletsane agrees. “It’s so disgusting that people are staying there,” he said.

But lockdown has disrupted the standard decision-making process, and one of the “interested and affected parties”, the Noordhoek Environmental Action Group (NEAG), was only informed about the province’s environmental approval on 14 June.

NEAG, which earlier this year also appealed Phase 1 of Houmoed Avenue Extension that had been approved late last year, filed its appeal against Phase 2 in July.

The green group says it is not opposing construction of the new road in Masiphumelele or the upgrading of the homes there; its appeal is a challenge to the legality of the environmental impact assessment process that underpinned the province’s approval.

The City of Cape Town’s response document to NEAG’s appeal was only filed with the province on 13 August, one day ahead of deadline.

The City’s plan involves maximising housing opportunities in the space between the proposed new road and the existing formal housing in Masiphumelele, with upgrades here to some 1,500 of the total 2,500 affected households.

The actual number of housing opportunities will only be finally decided during the detailed design phase.

This project involves major infilling and the provision of urban infrastructure, with significant bulk earthworks to elevate the site above the 100-year flood level and provide adequate stormwater management. The stormwater management plan includes extensive pre-treatment of stormwater prior to its final discharge to the wetland.

This upgrading work will be undertaken in a phased manner, and the planned 940-metre extension to Houmoed Avenue is central to its implementation. This new road will be constructed along the southern fringes of the wetlands to form a “definitive hard boundary” between the wetlands and the residential area.

According to the planning proposal, the road will have a solid retaining wall between two and three metres high on the wetland side, and there will also be a two-metre wall between the roadway and the upgraded settlement to act as a noise barrier. This wall will be designed to allow the movement of pedestrians and animals, but without compromising its noise reduction properties.

The remaining 1,000-odd informal homes that cannot be accommodated in the upgraded area will have to be relocated – and there is not yet full buy-in from affected residents because of uncertainties around the selection of host sites for their proposed relocations.

According to the draft environmental management programme for the proposed new road link that was published in November last year, the City’s resettlement planning showed that 75% of these households could be relocated within a 1km radius of the existing site, while the remaining 25% could be accommodated within about 2.5km of Masiphumelele. In principle, the City was committed to ensuring that those requiring housing in the Masiphumelele area would be accommodated on-site or within close proximity to the site, the document states. “Should there however be households that are willing to relocate outside of the valley, this would be considered.”

Moletsane told GroundUp this week that he had been asking for clarity on the proposed new relocation sites for some time but that the City’s response was “not 100% clear”.

“This is something that the City still needs to clarify. They said it was ‘in the valley’ but with no specifics.”

He said he hoped this would be resolved at a key meeting with the City scheduled for next week (2nd September).

Felicity Purchase, Mayco Member for Transport, said that no tenders or calls for expression of interest from contractors for the new road and upgrade project had been issued yet. “The City will only consider going out to tender once a positive environmental authorisation is awarded. The City awaits the outcome of the appeal process and will determine the way forward once this process has been concluded,” she said.

NEAG’S appeal will be adjudicated by provincial environment MEC Anton Bredell. A spokesperson told GroundUp this week that the appeal had not yet reached his desk.

One of the conditions of the province’s approval is a “wetland offset” – effectively a compensatory land swap involving a conservation-worthy 149.2ha section of a City-owned property in Noordhoek (Remainder Cape Farm 933). This property includes non-degraded wetland habitat that will “offset” wetland lost to housing at Masiphumelele, and it must be brought under some form of permanent conservation management in a formal agreement between the City and conservation authorities SA National Parks and CapeNature.

On Monday we will explain NEAG’s appeal.

Next:  1,500 homes were promised. Four years later not a single one has been built