The first directive by the Western Cape government was issued in January 2017 and a second one in July 2017 by then Provincial Director of Environmental Law Enforcement Dr Eshaam Palmer sent to the City’s Executive Director of Informal Settlements, Water and Waste Management Dr Gisela Kaiser.

Palmer said the City had failed to provide toilets, ablution and washing facilities, as well as storm water management and proper solid waste services. The province ordered that the City repair all the blocked toilets, provide additional toilets, and dredge the canals every two months. The City was also ordered to provide time frames for clean-up operations, inspections and maintenance of the storm water canals, toilets and standpipes.

Mayoral Committee Member for Informal Settlements Xanthea Limberg said at the time the City had appealed the directive, stating that it was already attending to issues in the community and was doing its best to improve the lives of residents. Limberg said nearly R2 million was spent on new water and sanitation infrastructure in the 2017/18 financial year.

The new Provincial Director of Environmental Law Enforcement Achmad Bassier said the City’s appeal was dismissed, the directive altered, and the department’s “investigation into the matter is still ongoing”.

Bassier said a compliance inspection was conducted on 4 July 2018. “It was evident that there has been a significant improvement at the informal settlement from the previous site inspections … New sewer lines have been installed and rerouted to alleviate blockages, toilets and associated infrastructure have been replaced and at the time of the inspection stormwater channels were being installed in areas where surface water had previously stagnated and/or community members would dispose of their grey water, thereby reducing the pollution on site.”

Bassier said, “The City has constructed two low flow diversion channels at certain stormwater canals to lessen the load of grey water in the canals. This also creates an alternative point for members of the community to dispose of their grey water. The City have created an innovative ablution block complete with showers, toilets and wash basins at one of the canals which would vastly improve the living conditions within the informal settlement.”

However, community leaders are not impressed. “The main issue is the canals … which people have been asking to be closed off. They are still open. The City says they clean them every day. But when you go there, they are dirty. Where is a permanent solution?” asked Masiphumelele community leader Tshepo Moletsana.

The City has built a pilot ablution facility consisting of six toilets and two showers in one section of the informal settlement. It has also put up washing basins, some of which are not yet functional. 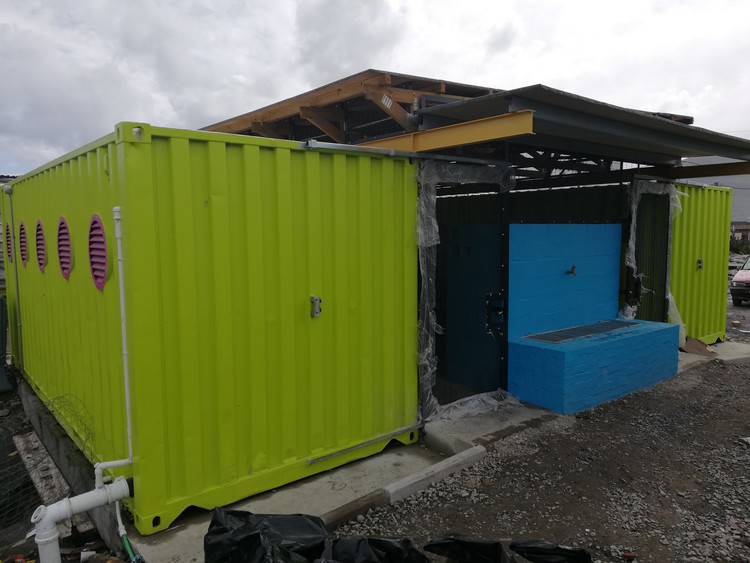 These are some of the new toilets built in Masiphumelele informal settlement. They were not yet ready for use when GroundUp last week. Photo: Thembela Ntongana

Currently, the community has 147 toilets and 22 taps. In 2017, the City introduced portable flush toilets, but many residents in the informal settlement rejected these.

Wetlands informal settlement community leader Sithembele Mtshaba, who has been living in the area for 26 years. He said there were not enough taps in the community. “It is just not feasible … The toilets are still not enough.”

Resident Nosihle Mbewu has lived for ten years in a two-room shack with her two children and partner. “I personally do not understand the need for showers that could have been two or more toilets. Who will leave their house and go and take a shower next to the road? … There is no privacy. I’d rather use my tub.”

“Maybe what the City needs is to understand the situation that we live in. I do not know how long that will take, because we have been complaining for years. I am not going past dirty and smelly canals to go take a shower. Why can’t that money be used to close off these things [canals]?” asked Mbewu.

Mayoral Committee Member for Urban Development Brett Herron said short-term litter and night soil were removed from the canals on weekdays. He said the City was “working on a more permanent solution to the canals and improved storm water infrastructure.”

Herron said, “These plans are linked to the introduction of a new road that will provide emergency service access and improved flood protection and storm water infrastructure for this part of Masiphumelele.”

“The Environmental Impact Assessment studies for the proposed road are in the final stages of being completed. Once completed, these will be submitted to the Western Cape Department of Environmental Affairs and Development Planning and the National Department of Water and Sanitation for the relevant authorisations to permit the construction of the road,” said Herron.

Next:  Shangaan shop owners chased out of Duduza

Previous:  The long wait for a foster care grant

To add some substance to your excellent article I must make these observations:
The City last year illegally dredged the canals into the wetlands, purposefully directing this longstanding pollution into the environment. This was undertaken without any public participation process, scoping process, environmental assessment and without considering any alternatives.

When this was objected to, the City filled in some sections of the canals it had illegally dredged into the wetlands, yet left the high nutrient pollution to drain into the wetland. I lodged a PAIA application to ascertain what process the city followed and received an altogether insufficient reply that I am in the process of responding to.
The road that Herron refers to is NOT going to solve this problem. The city has known about the problem for over 2 decades yet has done nothing to address its responsibilities or obligations in this regard.

In my opinion this highly polluted waste water from Masiphumelele must be redirected, through pump stations, into the sewage works adjacent to the township and treated as the sewage that it is. It is unacceptable to continue to pollute this critical part of the wetland, which is not only profoundly unhealthy for the residents but which has serious implications for the sustainability of the entire downstream Noordhoek Wetland ecosystem, one of the largest remnant wetlands in the City. This cannot continue.

This saga is an example of the City failing to properly govern as per its mandate.

Who is polluting Masi's canals?

I used to enter Masiphumelele regularly until threatened so I saw the state of the canals. My question is who dumps the rubbish, night soil etc in the canals other than the residents of Masi.

My opinion is that it is done for two reasons: To create employment by having almost permanent clean up crews (Have a look around the rubbish skips, nothing goes in it is chicked on the ground) The second is the usual political move to make the present ruling parties look inefficient.