“I have been on the housing database for years, but I still have no house” says occupier 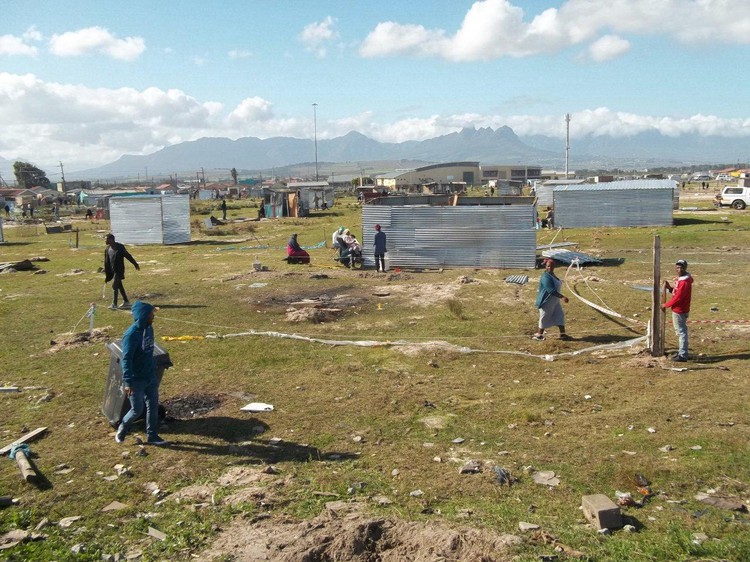 About 300 former backyarders from Makhaza have their sights on land earmarked for the MAHAMA housing project. Photo: Vincent Lali

“Residents continue to join us here because they can see that we stand our ground and that we go nowhere,” said Simbongile Biko, a community leader at the on-going land occupation near Noxolo Xauka Primary School in Makhaza, Khayelitsha, Cape Town.

On Sunday about 60 completed shacks stood on the land and people were marking out new plots and rebuilding despite law enforcement repeatedly demolishing shacks on the City-owned land.

“Each resident gets a ten-metre plot so that everyone who fought along with us gets a share of the land,” said Biko.

The occupiers say they know the land is earmarked for a housing development and they won’t stand in its way. “When the City builds blocks of flats here, we will dismantle our shacks to create space and move in [to the flats] after each block is finished,” said Biko.

About 300 backyarders have their sights on the land. Some already have shacks, others are still trying to get building materials.

“Those whose building materials have been confiscated stay in groups of six to ten,” said Biko.

The occupiers have left space between the shacks for roads for emergency services. “The roads will also help construction vehicles to move around when the City builds our flats and installs water pipes,” said Biko. In the meantime they want chemical toilets and water tanks.

“We agreed with the City that Makhaza will be the last of the three townships to get the housing development because the wetland will involve a lot of work,” said Dudumashe.

“At one of their meetings, the land occupiers made a decision to burn SANCO leaders’ houses if law enforcement destroys their shacks … Now we fear for the safety of our families,” he said.

The SJC’s Axolile Notywala said activists had been at the site as members of SJC, Khayelitsha Community Action Network and “accredited human rights monitors”. The activists didn’t encourage the former backyarders to occupy the land, he said.

Notywala said, “We have experience of the brutality and violence from Law Enforcement, so our role and intervention was to ensure that people’s rights were respected even during eviction and that the demolition happened in line with the law.”

He said he knew there was a tension between the land occupiers and the community leaders and SJC was prepared to act as an honest broker between the two.

A Makhaza community leader, Lucky Mbiza, said he objected to the occupation. He said it would be a burden on nearby home owners with occupiers demanding to use their water, electricity and toilets.

Ward 96 Councillor Danile Khatshwa (ANC) said the housing project would get off the ground in June 2021. “I’m trying to get the City to place a wire fence around the land and put up a notice that states what is to happen on the land,” he said.

Councillor Malusi Booi, Mayco Member for Human Settlements, said that the City is acting to prevent the illegal occupation.

“This is a City housing project. Any occupation of the land will affect the rightful beneficiaries. It will not be tolerated,” he said. “The City will follow the Allocation Policy and Housing Database for the fair delivery of opportunities to qualifying beneficiaries.”

Next:  Luyolo land claimants to wait another three years for housing project