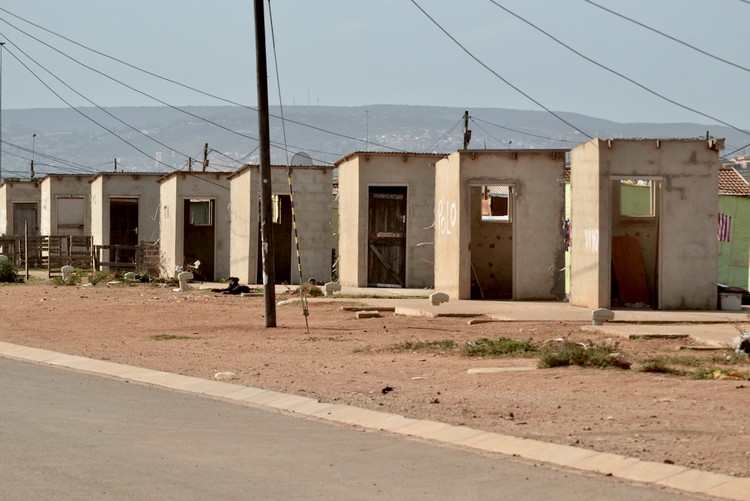 Some of the 300 non-flushing toilets built in Gunguluza next to Bobani Village in 2013. Plans are now underway to build another 846. Photo: Thamsanqa Mbovane

Tensions between the voting district (VD) committee and the ward committee in Bobani Village informal settlement in Gunguluza, Uitenhage, over the construction of hundreds of toilets has resulted in the R1 million toilet building project grinding to a halt.

The VD committee is obstructing the building of 846 toilets for phase two of a Human Settlements project in the area, arguing that 300 toilets built for phase one by the Coega Development Corporation in 2013 are broken and not flushing. The toilets were vandalised after construction. In 2017, people were resettled from various informal settlements on to the sites next to the toilets to protect them. No houses were ever built. The toilets never worked.

As numerous community meetings have shown, residents are frustrated and divided over the phase two project which started three months ago.

Residents say that they suspect what lies behind the stand-off is rivalry between ANC leaders seeking to control Bobani Village ahead of the 2021 elections, because the ward will be the site of several high value infrastructure projects.

VD committee chairperson Phindile Rolo (ANC) says all they are demanding is “quality of service and transparency”. “We want a guarantee that these new toilets will flush and have running water and not just a hit and run service delivery [as happened in phase one]. Also the process of registering beneficiaries in the project is not finished in that village … So who is going to get the toilets and who is not going to get them?”

Meanwhile, Ward 45 committee member Asanda Mni (EFF) says, “Residents must never allow projects to be stopped by people who already live in houses that have everything.”

“We were democratically elected … and we regret that we roped in the VD as our sub-committee, because today they want to control us,” says Mni.

Ward 45 Councillor Siphiwo Plaatjies (ANC) says, “They must wait for us to construct one toilet and then if it’s not flushing it’s where they can come in and accuse us.”

“We are still investigating as to what happened to the project which saw 300 toilets being non flushing, with no running water,” says Plaatjies.

He says the toilet construction is a response to Covid-19. “The other wards such as 44 and 42 have already constructed the toilets in their informal settlements and we condemn those who want to stop the project in ward 45.”