They also say they lack protective gear for Covid-19 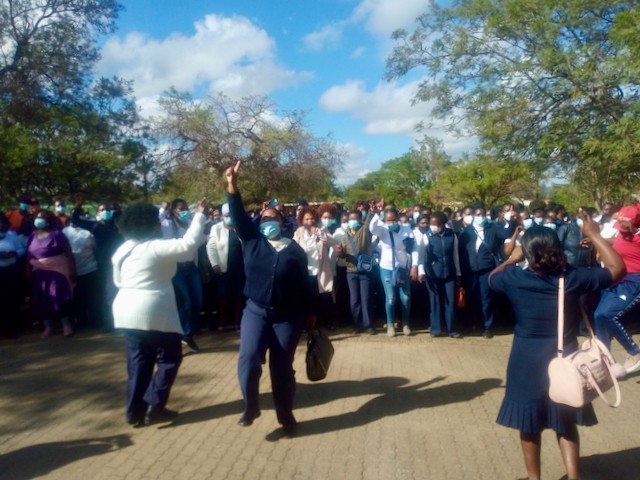 Several hundred people under the banner of Limpopo Community Health Workers marched on Tuesday to the Mopani District Department of Health demanding to be made permanent employees. Photo: Bernard Chiguvare

Several hundred people under the banner of Limpopo Community Health Workers marched on Tuesday from Giyani police station to the Mopani District Department of Health.

These health workers want to be made permanent employees.

They also claim the municipality owes them money. They say they were paid R2,200 but should have received R3,500 per month for the past year. They also want a R2,500 a month “Covid allowance” for the past 12 months.

A lack of personal protective equipment for Covid-19 was also a major concern. “It seems the municipality does not consider us to be frontline workers,” said Grace Nkuna, a community health worker since 2007. “At times when the municipality delays handing us face masks we buy or use pieces of cloth … The municipality tells us that it does not have face masks. Yet nurses have a constant supply.”

Some health workers said they even have to buy their blue uniforms.

The marchers were also joined by some administrators, groundsmen, Expanded Public Work Programme workers who accuse the municipality of unfair recruitment practices and officials of nepotism.

Ernest Mboweni, Mopani District Deputy Director Labour Relations, accepted the memo. “The memorandum is going to receive the attention it deserves. Issues that needs the attention of the MEC will be escalated to her,” he said.

Next:  Gqeberha crèche shuts down because of sewage overflow