Activities at the building which also housed a soup kitchen, mobile clinic and church have also been suspended 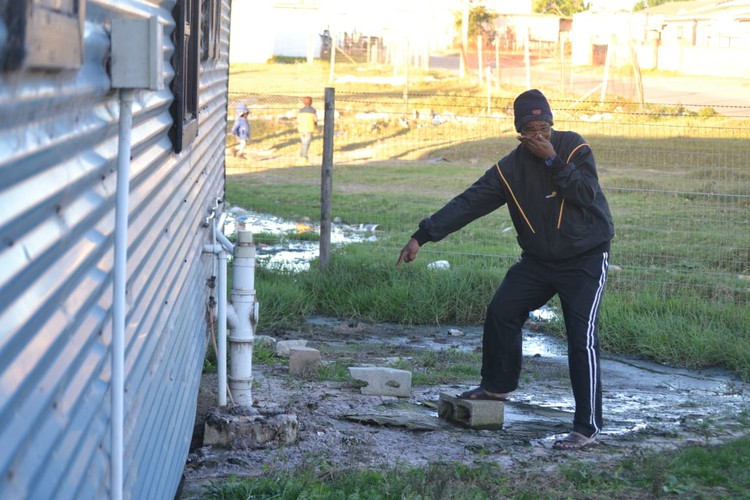 Bishop Bearing Sefali points out some of the overflowing human waste at Luyanda Preschool in Motherwell. Photo: Joseph Chirume

The only registered preschool in NU11, Motherwell in Gqeberha has been forced to close down due to recurring spillages of sewage around the building.

“All the streets around here are covered with sewage … Parents are struggling because they have to go to crèches far away. Most parents can’t afford to pay for transport,” says Alicia Sicwebu, owner of Luyanda Preschool.

Sicwebu accused the Nelson Mandela Bay Municipality of failing to repair the sewer system. She said the trouble started in 2019 and had been a recurring problem ever since. Luyanda catered to 36 children before the Covid-19 lockdown last year. Sicwebu and her daughter, Sinoxolo, employed two full time assistant teachers and a cook.

“I have been given various reasons by municipal officials in Motherwell saying they will fix it permanently but nothing happened. They never told me what the problem is,” said Sicwebu.

Parent Nokulunga Kache said she does not have money to pay for her four-year-old nephew’s transport to the nearest crèche. She said it would cost R200 per month in addition to the R250 school fee.

“I took over the responsibility of raising my nephew. I’m a seasonal worker in Addo and my pay is not enough for both the child’s fees at the crèche and transport,” she said.

The preschool also housed a soup kitchen, mobile clinic for the elderly and a church, but has not been able to function due to the smell and state of the grounds.

Bishop Bearing Sefali of the Gap Ministry said that besides not having a place for church members to meet, the continued closure of the building could attract vandals.

Municipal spokesperson, Mthubanzi Mniki, said a thorough investigation will be done of the sewage infrastructure. Mniki cautioned that “vandalism and throwing of foreign objects into the sanitation and storm water system remains the cause and a challenge” for the municipality.

Next:  No vegetables, no fruit: surviving without the Covid-19 grant