Life in Plastic City is hard, but being an immigrant makes it worse

Mozambican immigrants and Xitsonga-speakers say they are discriminated against

Lying on the outskirts of Brakpan is the informal settlement of Plastic City, a place where people are so poor they live in shacks made of discarded board instead of the usual zinc.

One part of it is called Shangaan Section, where a number of Mozambican immigrants and Xitsonga-speakers live. Many of them scrounge at a nearby dump to survive. The immigrants say they are discriminated against and treated poorly by the South African waste pickers. 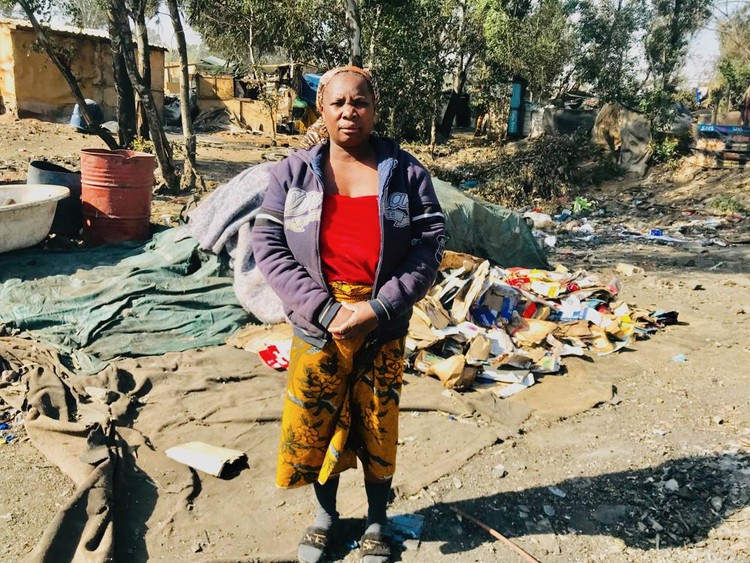 Matisela Mandlosi came to Plastic City in 2010. She occasionally sees her children in Mozambique

Matisela Mandlosi came to Plastic City in 2010. She lives alone in a tiny shack. She has six children. One of her children lives with relatives and is doing grade 10 in Vosloorus. The rest of her children are in Mozambique.

Occasionally, she goes to Mozambique to see her children, but she can hardly afford to buy food for herself with the R1,400 she earns a month.

“I work without protective clothes inside the dump. I do it for my children. As long as I can send them money, everything else does not matter,” she says.

Mandlosi says people sometimes steal her recyclables during the night after she had finished sorting them out.

“If l lived in Mozambique, l would not be able to look after my children as life there is very hard,” she says. 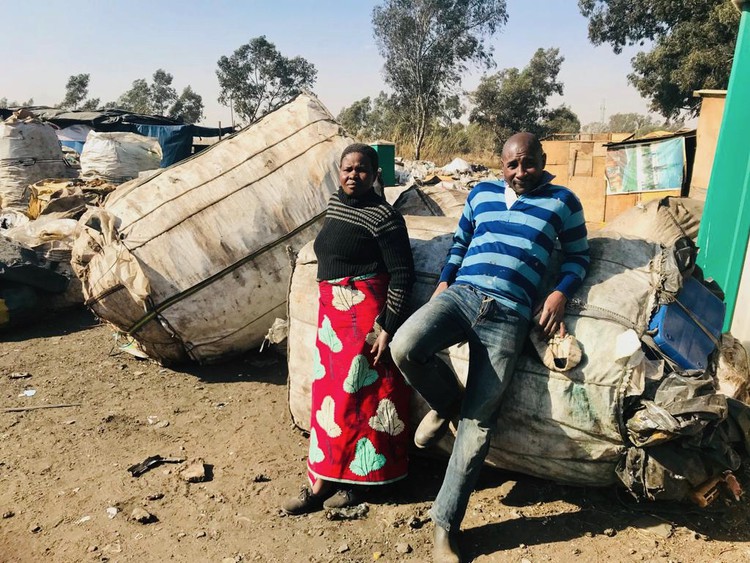 Alnaldo Hlungwani is a Xitsonga-speaking South African and lives with his wife, Saulina. “They say I bought an ID, but that is not true,” he says

Alnaldo Hlungwani is a Xitsonga-speaking South African. He has lived in Shangaan section since 2011, after he lost his job with a company in Brits.

“Other South African citizens treat us like dirt. They say I bought an [SA] ID, but that is not true,” he says.

Hlungwani lives with his wife and two-year-old child in a one-room shack made of board and plastic. They sent their other five children to Mozambique because of they were traumatised by raids made by the Red Ants.

Hlungwani and his wife make about R300 a week collecting recyclable material. They send what they can to the children in Mozambique. 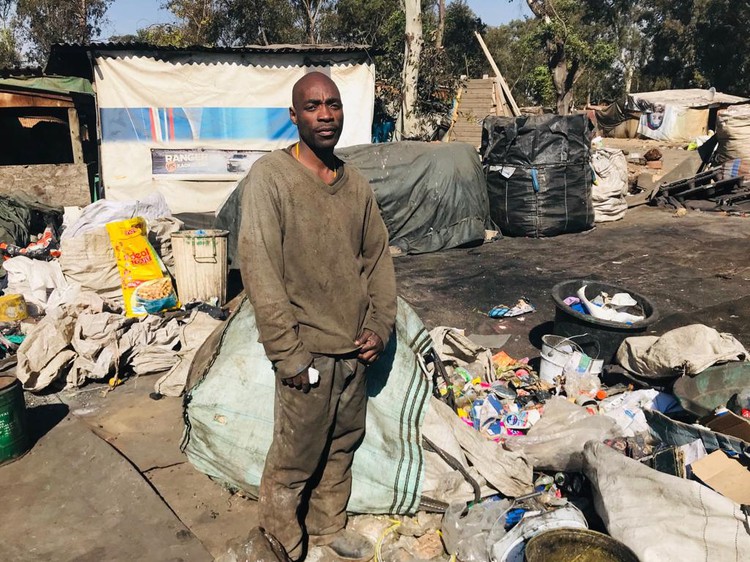 Antonio Chilenje came to South Africa, aged 17 in 1996, and settled in Plastic City

Antonio Chilenje came to South Africa, aged 17 in 1996, and settled in Plastic City. His wife and six children are in Mozambique. They sometimes visit him.

Chilenje says he makes R2,000 a month collecting recyclables from Monday to Sunday inside the dump. Sometimes he receives maize meal handouts from charitable people who visit the informal settlement.

He also says he faces discrimination inside the dump because he is from Mozambique. People will knock over his stacks of recyclables and he has to pack them all over again, he says.

“I want to bring the rest of my family here because life in Mozambique is hard. But l do not want them to endure the suffering we go through here. All l want is to be able to provide for them; that’s what a man does.” 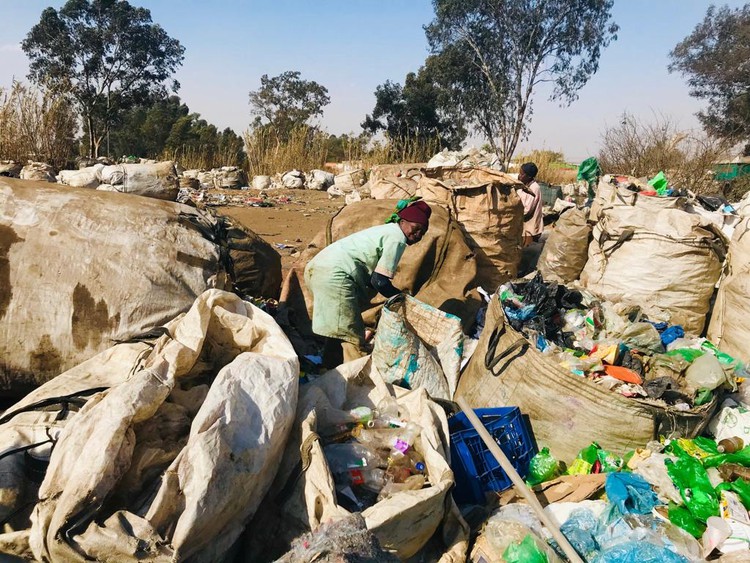 Alda Makeke, a widow, has lived in Shangaan section for the past 10 years

Alda Makeke has no children and she is a widow. She has been living in South Africa since 1999, and in Shangaan Section for the past 10 years.

Every night after sorting her recyclables she goes to her small shack and eats what little she can find. “I can hardly afford to even feed myself,” she says.

“Living the way we do here in Plastic City is not easy, but because we are poor we do not have much of a choice,” she says. 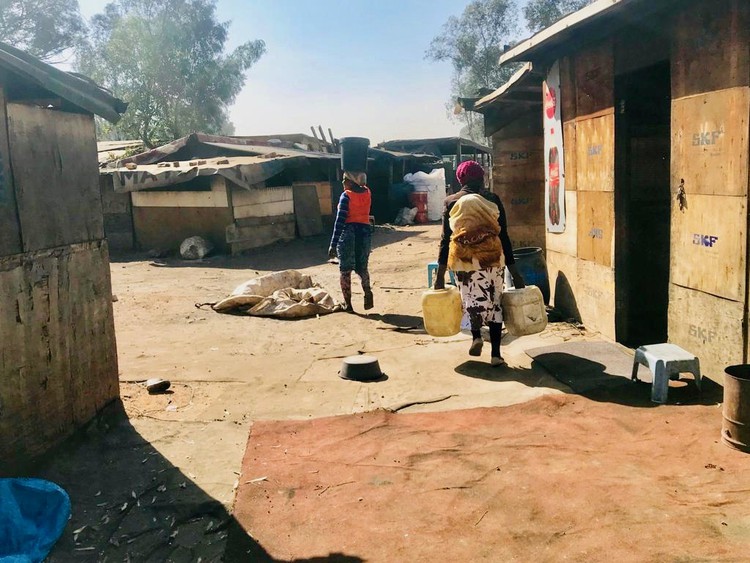 Regina Msimango was an orphan brought to South Africa at the age of 12 by a sangoma who later abandoned her.

She met her first husband when she was 15. He died some years later. Her second husband was a waste picker and she moved with him to Plastic City in 2011. After she had triplets, her second husband abandoned her.

Her six older children are from her first husband, a Xitsonga-speaking South African. She does have his ID number, but they did not register her children with Home Affairs. In addition, she has four children from her second husband and she also looks after two grandchildren. She says people mock her for having so many children.

For years the recyclable material she collected would be forcefully taken from her by South African waste pickers, she says. They told her she didn’t belong and to go back to Mozambique, but she says she had paid them R1,000 as a joining fee to be allowed to collect materials at the site.

Msimango and her large family live in a tiny two-roomed shack made of discarded board roofed with plastic. They mostly eat plain pap. Sometimes she finds thrown away meat and cabbage at the dump site.

“Hunger is our daily bread,” she says.

Her children do not have warm clothes or shoes and sleep in the kitchen next to the fire.

Eight of her children attend school in Kingsway, 15km away. They walk. The younger children have dropped out of school as it is too far for them.

She joins hundreds of informal waste pickers who work on the Brakpan dump from Thursday to Sunday, and it gets very crowded from noon to 5pm she says. She has no protective clothing.

“Sometimes we come out with nothing. But all I want is for my children to have a better life,” she says.

Correction: The story originally said Msimango did not have her first husband’s ID number.

Next:  No shelters for Johannesburg’s homeless

Previous:  “There are only two pit toilets for the whole school,” says Limpopo learner