No shelters for Johannesburg’s homeless

City says 10,000 people are living on its streets, but it only funds one shelter

Rissik Street, Johannesburg, is home to Sihle Sikhakhane, who came to the city from Aliwal North in the Eastern Cape.

“My father had just passed away … I was only left with my younger sister and our grandmother. We survived on her pension,” says Sikhakhane.

A family friend told him that a construction company in Johannesburg was looking for general workers and gave him the address.

“Coming to Joburg for the job, sounded like the ideal opportunity that would change our situation,” he says.

“I discovered that there was no such job, or even a company. When I went to this certain address in the CBD, I found this old building closed and the [phone] number I got was not working anymore,” says Sikhakhane.

“I feel like a loser now … I only wish I can get the job I came to Joburg for. If I can work, I can maybe find a way to go back home … I can’t go back like this. I lost everything due to being homeless,” he says.

Sikhakhane washes himself at public toilets and he now survives as a car guard. The 27-year-old has been sleeping in a small park next to COSATU house, Braamfontein, for the past three and a half years, joining the ranks of thousands of homeless people in the city. 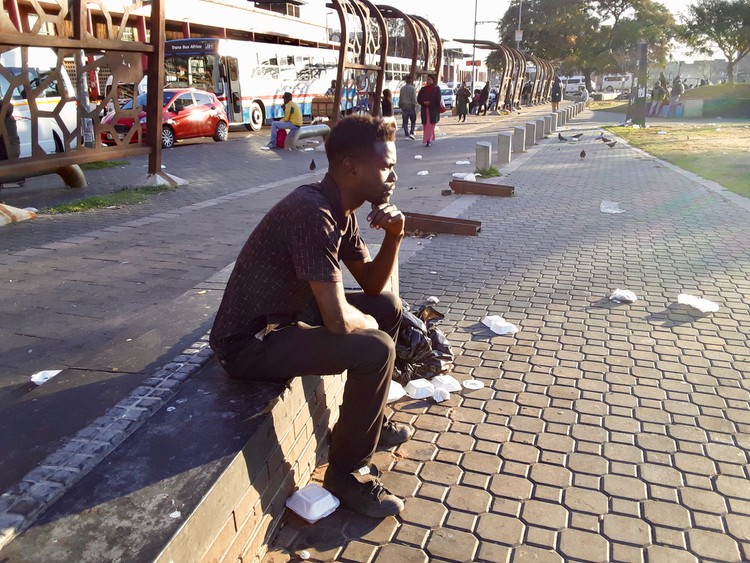 Thamsanqa Langa came to Johannesburg from Pietermaritzburg in search of work. When his contract ended he found himself on the streets.

Thamsanqa Langa has been living rough on the streets since January 2017. He sleeps at the Bree Taxi Rank, along with several other homeless people.

He is originally from Pietermaritzburg. “I came here looking for a job, I got one in a construction company. It was a seven-month contract. When this ended, I just didn’t have anywhere else to go. I found refuge in smoking and drinking. Since I could not afford to pay any rent, that’s when I decided to stay on the streets. I slept anywhere I could find a spot to hide myself,” says Langa.

He says he is hooked on nyaope now, but trying to quit. He dreams of getting a job and rebuilding his life. “I do not want to go back to Pietermaritzburg as a failure. I came here to start a life and to be something.”

Nosipho Buthelezi, who also came to the city from KwaZulu-Natal, also sleeps at the taxi rank. She has been living on the streets since 2010.

“I have been raped, beaten and had to succumb to any form of ill-treatment that the streets offer me,” she says. “I just live to see another day now. I sleep on this vacant space every day, with an old ragged blanket. We use old plastics and cardboards as beds. In the morning we wake up and make our bed, to go and hustle. I get sick and get better again. I don’t even have an identity document.” 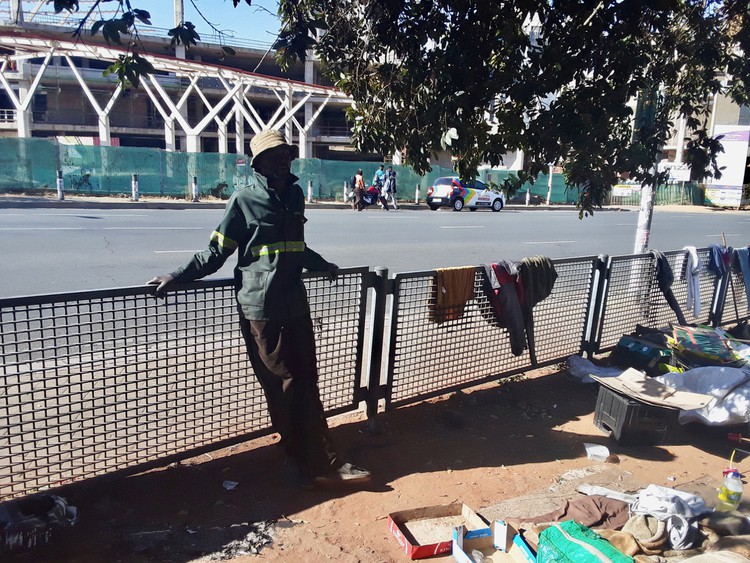 Sthembiso Mdluli moved from Springs to Johannesburg after his mother died. The shelter he stayed in closed down in 2014.

Sthembiso Mdluli moved to Joburg in 2007 after his mother died. “My life became tough when my mother passed away. We all shared a shack in Springs. I never knew my father. I basically don’t know any of my extended family. I just had my mother and grandmother … My grandmother got admitted to an old age home,” says Mdluli.

He lived on the streets for two years, but moved into a shelter in 2009. When the shelter [the Turning Point in Brixton] closed down in 2014, he found himself back on the streets.

“I fear going home now and being seen as a failure. Besides that, I don’t know any family I would say I am going back to,” says Mdluli.

He survives on piecemeal jobs and eats at a soup kitchen organised by a church in Braamfontein.

“I am just thankful I have not found myself hooked on any drug. I see how they damage many people’s lives in front of me,” says Mdluli.

Kebonye Senna of the City’s Displaced Persons Unit said, “On the last count [September 2018] … the City of Johannesburg alone had around 10,000 homeless people. This number surely keeps rising every day.”

“The only shelter we have is the Kotze Street shelter in Hillbrow, established in 2011. The shelter accommodates both male and female displaced people, from 20 years of age upwards.”

Kotze takes about 180 people and asks for R8 a night.

“Other than this we are still in the process of building two more shelters for displaced people – in Windsor West and in Florida,” said Senna.

Windsor West is only in the earliest stages and could be years off. In Florida there are a few prefab structures and social workers. There is a soup kitchen. There are no showers, but soap and towels are handed out.

“Unfortunately, at the moment we don’t provide any financial support to NPO-owned shelters dealing with the homeless,” said Senna.

Spokesperson for the Gauteng Department of Social Development Busi Kheswa said, “The department does provide shelters, however, they are linked to categories … We have shelters for victims of gender-based violence and shelters for children.”

Kheswa said they have no shelters for adults outside the categories they service.

There are a number of shelters in the city run by civil society organisations, but many do not cater for homeless adults.

Pastor Bongani Fatyi of the Salvation Army in Braamfontein said, “We offer a soup kitchen, which is open to every homeless person in the CBD. Sometimes we have old clothes for those we can assist. Unfortunately, in terms of shelter, for now we accommodate vulnerable children only. This is still a big challenge, because many homeless in Joburg came here looking for ways to better their lives. However, when things don’t work out they end up sleeping anywhere they can.” 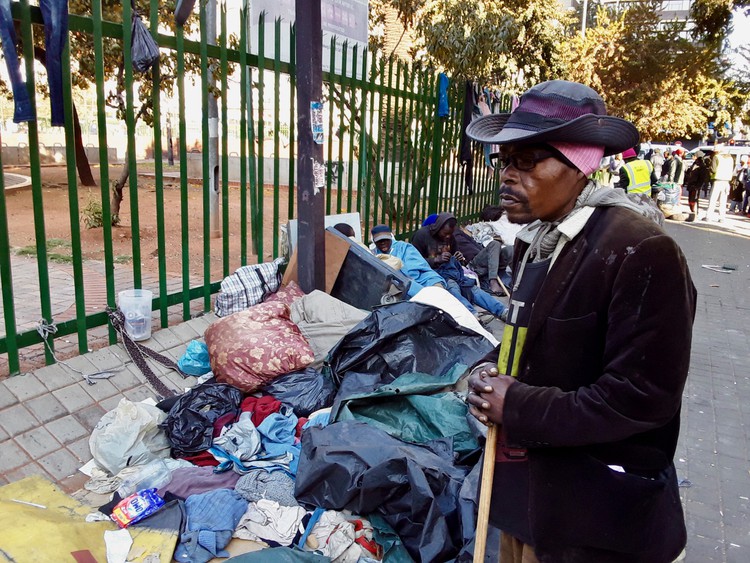 Jam Nyaka on the pavement where he sleeps on Rissik Street, Johannesburg. He survives as a car guard. “The cold is our big challenge,” he says.

Next:  Minister hears allegations against police after 11 murdered on weekend

Previous:  Life in Plastic City is hard, but being an immigrant makes it worse