The people of Plastic City cannot even afford zinc shacks

Situated on the outskirts of Brakpan next to a dump site is Plastic City, an informal settlement where homes are built out of discarded board and plastic. The residents say they are too poor to afford the zinc sheets most shack dwellers use.

The Red Ants eviction services has repeatedly removed them but they have rebuilt. The most recent demolitions were in September 2018.

Most people in the community rely on waste picking for survival. Many of their children do not go to school; those who do, have no public school transport service and struggle to get to school. 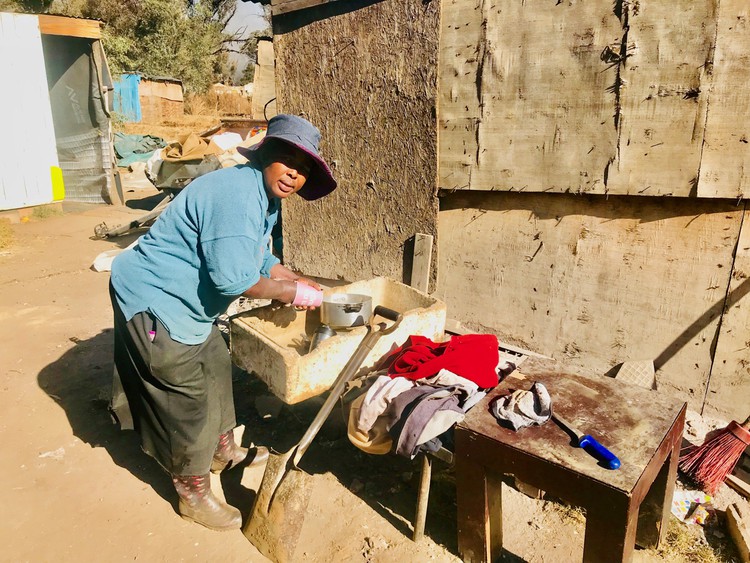 “We are probably the poorest people in South Africa otherwise we would be living in a better place. All l want is to get a house in a decent place so my children can attend school,” says Kuki Sello.

Kuki Sello is a single mother with seven children. She has been living in Plastic City for almost ten years. The family lives in a shack made of boards. At 5am they start to look for recyclable material around Brakpan town and nearby places.

She came from Tafelkop, Limpopo. Her two older children finished school there; the other three children do not attend school. Sello says she could not get them placed in nearby Brakpan schools as she is not computer literate and couldn’t file an online school application.

Two of her children receive social grants. The family eats expired food sold cheaply by waste pickers from the nearby dump. Sometimes when the food is obviously bad, they get it free.

Sello says she has TB and her doctors have advised her against living in Plastic City. “But if l move away from here, where will we go and what will my children eat?” asks Sello. 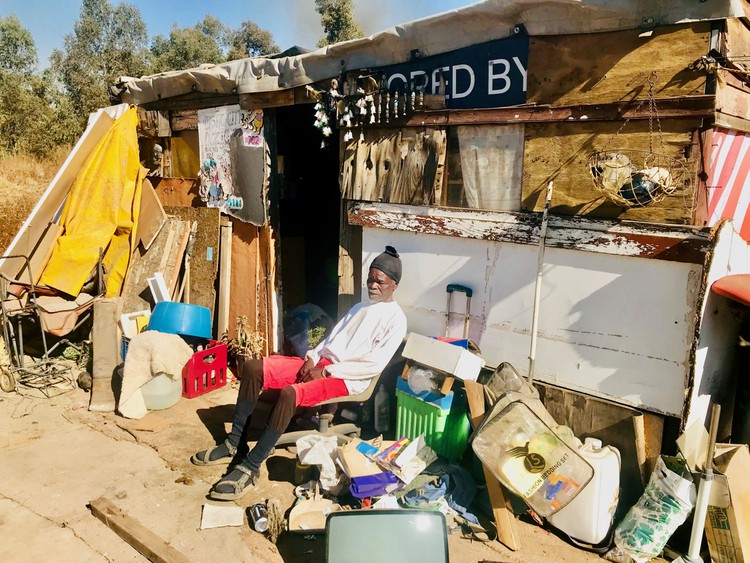 Lewis Mabuza, 53, says he has never had a house of his own.

Lewis Mabuza lives alone in his ramshackle shack. He has been living in the area for over seven years. He used to work as a security officer in Brakpan before he was fired from his job five years ago.

He has TB and is too weak to work for himself. He relies on handouts from the Plastic City community.

“I now live like a bird because I cannot look after myself. I eat whatever well-wishers bring me, sometimes they also bring me food from the dump,” says Mabuza. 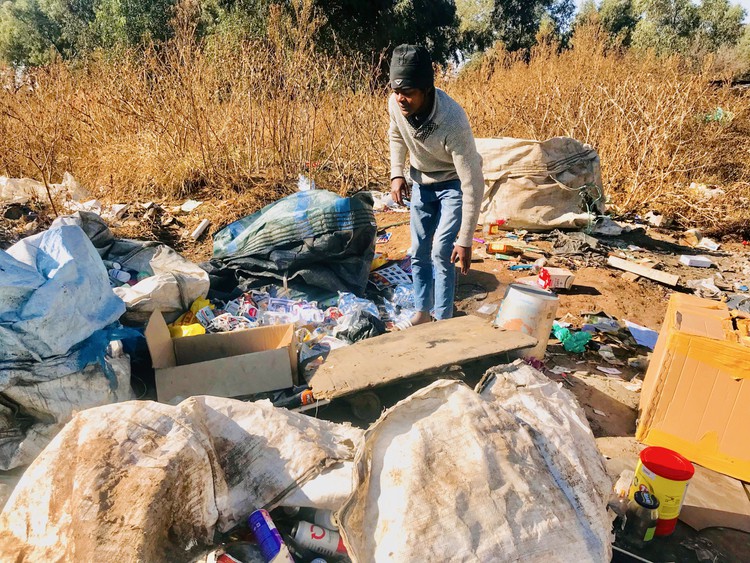 Maputhi Lamuli, who is 21, says, “I wish to find a job and attend night school so l can finish school. But that seems like a long journey because there are no jobs.”

“My dreams were shattered when I left school in grade 10. l had to start collecting recyclable material to help my mother and siblings,” says 21-year-old Maputhi Lamuli.

He wanted to finish school and become a policeman. But he and his family came to Plastic City five years ago after they could no longer afford to pay rent in Tembisa.

The rest of his family then relocated to Limpopo, but he remained behind to try and earn a living and send them money.

Lamuli says his shack was burnt and all his possessions destroyed by the Red Ants last year in September. He now shares a shack with his friend who allows him to keep his recyclables on the premises.

He says he earns about R850 a month selling recyclables and he can hardly afford to buy food as he sends the money to his mother in Limpopo. He and his friend rely on a soup kitchen in Brakpan. 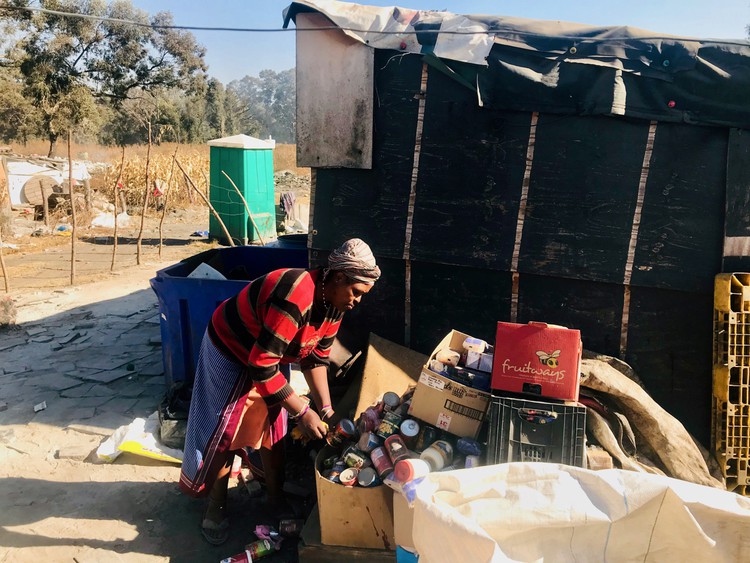 Zodwa Malatji says she applied for an RDP house in 1999 and has still not been allocated a house. She lives in a one-roomed home made of pressed board covered with plastic for a roof.

Zodwa Malatji supports her family by collecting recycling material. Most of her income, she says, goes on transport for her four children, who attend school in Duduza, some 40km away. When she doesn’t have enough money, they stay home. She too could not find a place for her children in nearby schools.

“There are no buses which ferry our children to school and the money I make from recyclables is too little,” says Malatji. 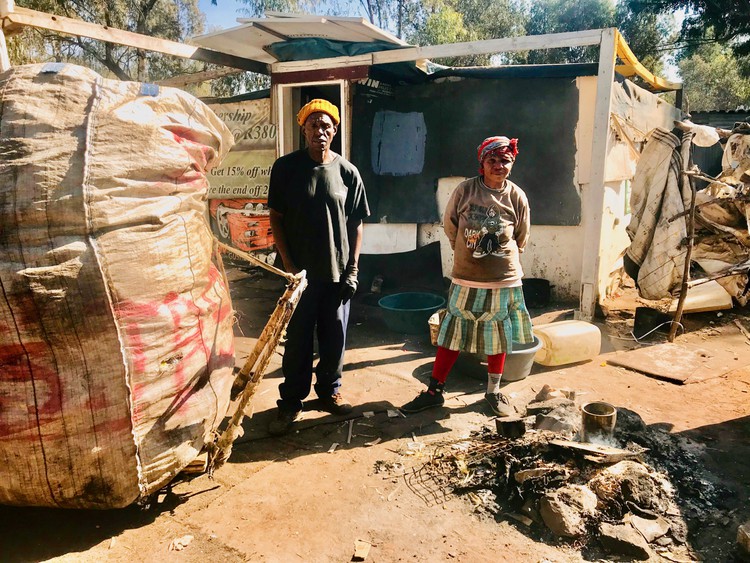 Jabulani Nhlapo and his wife, Stella, wake up at 4am to walk to Carnival City Mall, 11km away, to collect material for recycling.

Jabulani Nhlapo and his wife, Stella, have been struggling to scrape together enough to buy some zinc sheets to build a better shack. Their small shack, left to them by its previous owner, has barely anything in it. They used to rent a room in Brakpan town but could no longer afford it. They have been in Plastic City for about five years.

They are separated from their children, who live with family and attend school in Tsakane.

Sometimes they light a fire outside their house and cook, but most of the time they eat from a soup kitchen in Brakpan.

Sibusiso Mutiane, a community representative for Plastic City, told GroundUp: “We just want the government to remember us. Many people here are poor and little has been done to improve our lives. Some politicians have been in and out of our community making empty promises.”

“Surely poor people like ourselves have a right to live in a cleaner and better environment just like other people?” he asks.

Next:  Pietermaritzburg municipality lets water go to waste, but residents have to queue at the tap

Previous:  Inquest into death of baby after teargas fired in Marikana

Wolwerivier five years on: “We’re as desperate as the day we moved in”