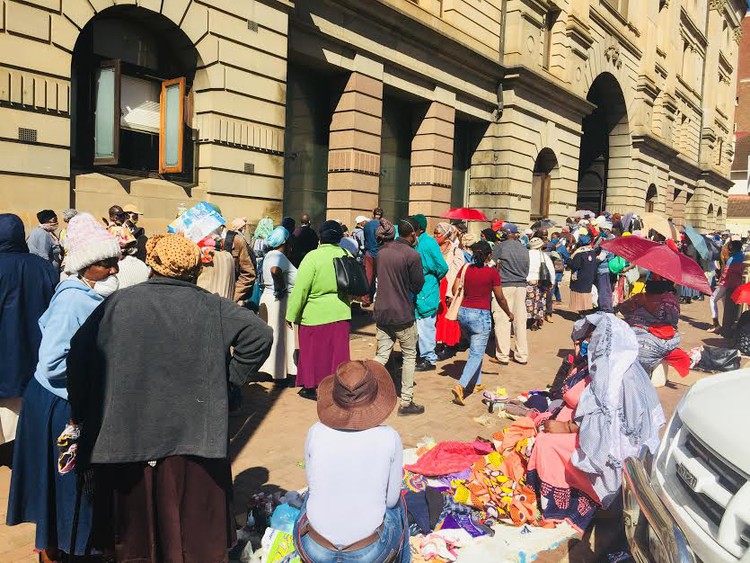 It’s not just loan sharks or mashonisas who are charging exploitative interest rates to poor people. Beneficiaries of social grants have become a lucrative market for formal lenders too, and this is slipping past the regulatory authorities, write Erin Torkelson, Deborah James, and David Neves.

Exploitative lending is commonly associated with informal loan sharks or mashonisas, who are notorious for offering high-interest loans to poor people, keeping their social grant cards and threatening violence. However, according to a new research report by the Black Sash and the London School of Economics, even formal creditors registered with the National Credit Regulator (NCR) charge extremely high-interest to social grant beneficiaries.

The NCR allows registered lenders to charge almost 70% per annum on loans to grantees, compared with up to 23% for middle-income borrowers seeking home and car loans. This was not planned. Rather is is the unintended consequence of a gap in the current policy which makes the social grant credit market vulnerable to usury. The fact that social grant beneficiaries have become a lucrative market for creditors has slipped under the radar of those institutions charged with regulating borrowing and lending.

Covid-19 has been devastating to South Africa’s poor. Job losses during lockdown have exceeded 2 million, adding to the 10.4 million who were unemployed in December 2019, and 3 million more people were driven into poverty. Even with the new grants introduced by President Cyril Ramaphosa and top-ups to existing grants, many beneficiaries have struggled to provide for their basic needs. Many have turned to loans, from formal and informal lenders, just to get through the month.

The National Credit Act was passed with the explicit intention to democratise credit and make it available to everyone, including those who had been excluded from it under apartheid. Credit markets rapidly expanded, as lenders were eager to offer loans to a new market of black workers with secure incomes in permanent government jobs. Black workers were a nearly risk-free market for lenders, who were able to automatically deduct loan repayments from salaries through the debit order system.

South Africa’s high unemployment rate has placed a limit on the business of formal credit and the loans that can be provided to middle-income customers. Credit providers have long been looking for ways to expand their market reach and “capture the market” represented by the poor and unemployed. This is where social grants come in.

Alongside the public sector employees, from whose salaries loan repayments were already being recouped, a whole new credit market was opened up - social grant beneficiaries. With their regular, guaranteed state remittances, they became a major growth industry for creditors because their incomes were effectively secured by the government and repayments could be deducted through the banking system from their SASSA-branded accounts.

CPS’s sister corporation, Moneyline, provided credit to social grantees. But there were other lenders too. Across the country, small lenders sprang up around SASSA offices and paypoints and marketed their products to grant recipients. The CPS grant payment system allowed lenders to be repaid, through the early debit order system, before grantees were able to access their money. Social grants became a form of secure collateral for loans because there was very little risk that grant recipients might default.

When grant payment was moved to the Post Office (SAPO), 71% of grantees shifted to SASSA-SAPO Special Disbursement Accounts, which do not allow for deductions. This makes it impossible for creditors to collect repayments through the banking system. This has been significant for protecting grantees from formal creditors, although they can — and do — borrow money from informal creditors. But the 29% of grant recipients with commercial bank accounts, including Net1’s EasyPay account, are a very significant market.

Yet, because the amounts that social grant recipients borrow are of very low value, this has largely gone unrecognised by the NCR. The social grant market does not appear to be substantial because it hardly registers in aggregate NCR statistics on national credit dynamics. Middle-income borrowers, by contrast, seem to be a much bigger problem because of the way they appear in the numbers and the amounts they borrow. However, even if grant recipients make up a very small fraction of overall household debt, their debts make up a very large portion of their household income. It is morally necessary to protect social grant recipients who borrow.

Under the National Credit Act, such loans fall under the provisions for “short term credit,” defined as loans up to R8,000 for 6 months. On loans in this category, the NCR allows lenders to charge 5% interest per month, a one-time initiation fee of R150, and monthly service fees of R50. If you add these fees together, the total legal cost of credit is up to 75% over six months. This means on a R1,000 loan — the typical loan size of a social grant recipient — the borrower will pay R1750.

Beyond the high legal cost of credit, grant recipients are routinely subject to fraud, with moneylenders deducting more than the contracted repayment. Lenders rarely provide the required loan documentation, conduct affordability assessments, or observe “cooling off” periods. Through these legal and illegal practices, grant recipients get trapped in cycles of debt, using a loan from one lender to pay off another. The end result, in many cases, is that the very social grant meant to support vulnerable people is eaten up in high interest rates, fraudulent repayments and bank charges.

Usually high costs of credit on short term loans are justified because this type of loan is considered “unsecured” and risky. But loans to grantees are, in fact, anything but “unsecured.” They are nowhere near as risky as these costs suggest.

Grant recipient borrowers have very little possibility of missing a payment or choosing not to pay, because repayments occur automatically through the formal banking system. Grant beneficiaries are defined as risky, and creditors are allowed to charge them significant costs, simply because they are poor and have no recourse. Therefore, it remains legal to charge social grant beneficiaries the highest costs for credit, even though these costs bear no relationship to the real risks involved.

What’s to be done?

The first thing to do is to ensure that it is illegal to lend money on children’s grants (child support and foster care grants) as well as on temporary grants. In the case of children’s grants, the money is meant for the child, who is under 18 and is not legally allowed to enter into loan agreements. The grant is far too small to support basic needs and should be completely de-linked from credit markets.

The second thing to do is to protect adult grants like those for pensioners and disability grantees. The legal effective interest is far too high on loans secured with social grants because there is no policy specifically for them. They are deemed risky because of who they are, not by virtue of an analysis of their actual financial circumstance.

The third thing to do is to build a social safety net that does not require grant recipients to seek credit to cover basic needs. Individual grants like pensions often support whole households, not just the pensioner. This is because South Africa does not have comprehensive social assistance for 13 million adults between the ages of 18 and 59 with no or little income.

Individual action on its own will never be enough to protect people from excessive indebtedness. If a pensioner has a sick child in the house, and the local clinic is closed, she will likely take a loan to go to a private doctor. Many people borrow to pay for things that the state should be providing, like healthcare or education. The best way of solving the problem of debt among social grantees is to enact basic income support for 18-59 year olds with little or no income, raise the grant amounts so people have enough money to cover the basics, and ensure that other state services like healthcare and education are comprehensive and accessible.

Erin Torkelson, Deborah James, and David Neves are at the Black Sash. Views expressed are not necessarily those of GroundUp.

Next:  Hawks set up special team to investigate Lottery corruption