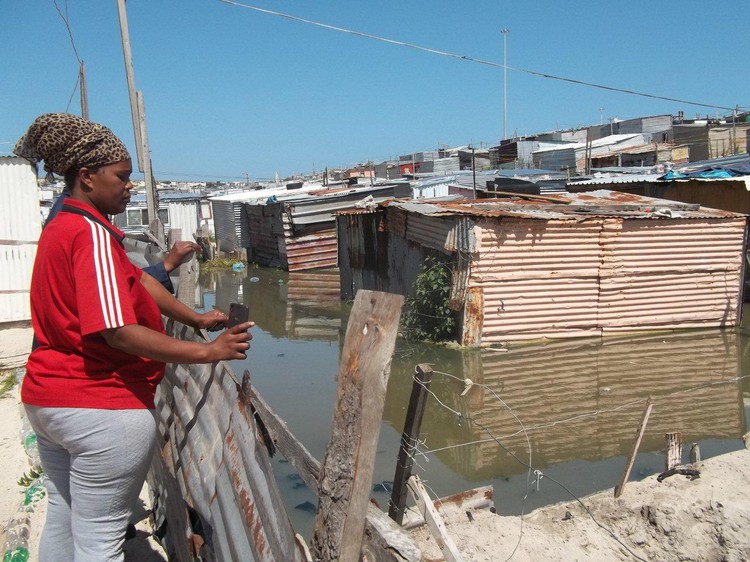 Mavie Ncinane, a community leader at Vosho informal settlement in Khayelitsha points out parts of her neighbourhood that have been waterlogged for nearly three months. Photo: Vincent Lali

Shack dwellers in Vosho informal settlement in Khayelitsha, Cape Town, say their homes have been waterlogged with “liquid shit” for nearly three months.

Vosho started in February 2018 and grew rapidly. There are now 1,400 shacks. They have no services, not even garbage collection. The shacks are built on a hill called Plattekloof.

“The water has been pouring out of a damaged drain, flooding our homes and troubling us for three months … We can’t buy groceries and store them in our shacks because wetness in our shacks makes them mouldy,” said community leader, Thozamile Finini.

Residents say the stagnant water smells foul and continuously flows from a damaged storm water drain located on Thafa le Hashe Street. In some parts, the sewage is knee-deep in shacks.

According to Finini, the City of Cape Town has arranged to move about 104 shack dwellers from Vosho to fenced land adjacent to the informal settlement. “I appeal to the City to prioritise residents whose shacks are flooded and relocate them to the fenced land nearby. They can’t continue to live in smelly and wet shacks,” he said.

Xolelwa Mbanjwa, works as a cleaner in Lentegeur and lives with her sister and her child. “My neighbours phone me from work and ask me to return home when the water moves into my shack. Sometimes they simply remove the water and clean my shack themselves,” she said.

When GroundUp visited Vosho, Mbanjwa was busy putting her drenched mattress, cupboard, chairs and fridge out to dry. “Green, filthy water flooded my shack and came up to my knees today. It soaked my belongings,” she said. The sewage also drenched her groceries, leaving her without food, she said.

Mbanjwa said she used corrugated iron sheets to fence her small yard and keep the dirty water away, but it still seeps in and floods her shack.

Mayco Member for Water and Waste Alderman Xanthea Limberg said that Vosho was not one of the informal settlements recognised in the City’s database.

“This community illegally occupied a stormwater retention pond. These ponds are dry during the summer months but when it rains they are meant to collect water that otherwise would cause flooding in the surrounding areas, and channel it to the underground storm water system,” she said.

“Families will be relocated to the TRA in a phased approach to satisfy and aid the greater Enkanini development project programme, which includes the mining of the currently invaded dune within the forthcoming months,” he said.

Next:  Legal but reckless: Lending to social grant recipients