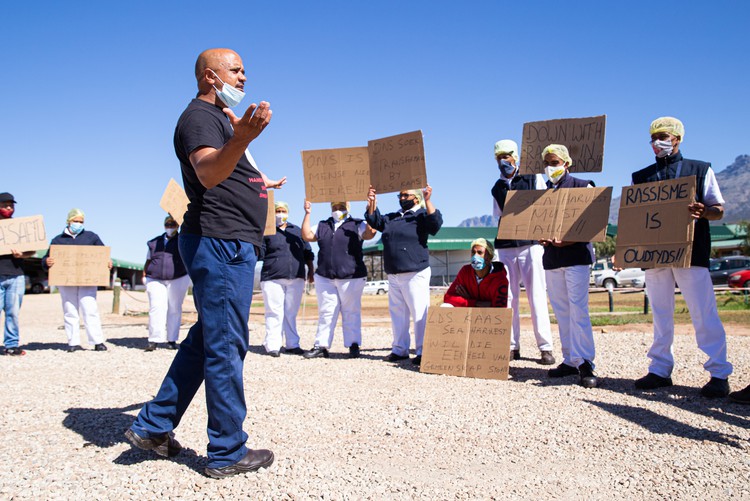 Workers at a Ladismith cheese factory demonstrated outside the factory last week in solidarity with farm workers in the area. The workers were also complaining about poor working conditions at the factory.

At the beginning of the month, about 50 workers at Ladismith Cheese, who belong to the Commercial, Stevedoring, Agricultural and Allied Workers’ Union (CSAAWU), downed tools and some refused to load the trucks of a transport company whose owner, a farmer, they said was racist towards farm workers.

The Ladismith Cheese workers now face disciplinary action from the company for leaving their workplaces. CSAAWU has denied that employees left their workplaces on these days.

CSAAWU has also said that its members at Ladismith Cheese should not be forced to work with the transport company. GroundUp has tried to contact the company but without success.

The owner of the company also rents farmland in Ladismith and employs about 17 farm workers. He is accused of choking, verbally abusing and threatening farm workers in his employ. Workers said he drove around with a rifle and he had pointed it at workers in the past.

Ladismith Cheese management sent CSAAWU a memorandum of understanding with conditions for withdrawing disciplinary action against the workers for leaving their workplaces. One condition was that CSAAWU “unconditionally accept” the outcome of Van Staden’s investigation.

Ronwan Rademeyer, chairperson of CSAAWU in Kannaland and Overberg, told GroundUp that the union would not accept the memorandum. “We can’t agree with it, because they want to bind our hands,” said Rademeyer.

He said that CSAAWU wanted to stop Ladismith Cheese doing business with the transport company because of the behaviour of the owner. He said farm workers were important. “They work hard, in this warm sun, through the wind and the rain. Why must they always get the short end of the stick?” asked Rademeyer.

When GroundUp visited the factory on 17 February, workers were demonstrating intermittently. They also complained to CSAAWU’s Ronwan Rademeyer about working conditions and injuries on duty at the cheese factory.

He said that management frequently questioned whether workers’ injuries actually happened at work. Workers often had to call in the help of CSAAWU in order to get management to report the injury, he said. 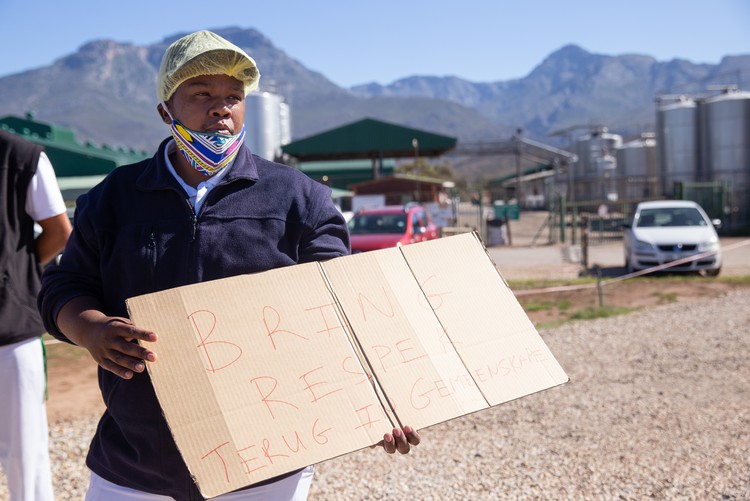 “If you injure yourself, then you’re told you’re putting it on,” said Francis Quantiney, another worker in the factory.

Quantiney said that women in the factory were expected to carry 20kg boxes and crates of cheese, though they had said this was too much. “Those boxes and crates are hopelessly too heavy for us women to pick up,” she said. “We don’t mind picking up the mozarella, which is 10 to 15kg.”

Elwira Stevens injured her back while carrying a 20kg crate of cheese. The company did pay some of her medical costs and she went to a physiotherapist.

Stevens said that she needed a medical letter to state that she couldn’t do the heavy load jobs, which she didn’t have. “If you don’t have it, then you must do the work. For a while I did normal work and injured my back more.”

Ladismith Cheese told GroundUp that it was in negotiations with CSAAWU and did not want to comment at this stage.

Previous:  At least two arrested during standoff between police and SAFTU in Cape Town