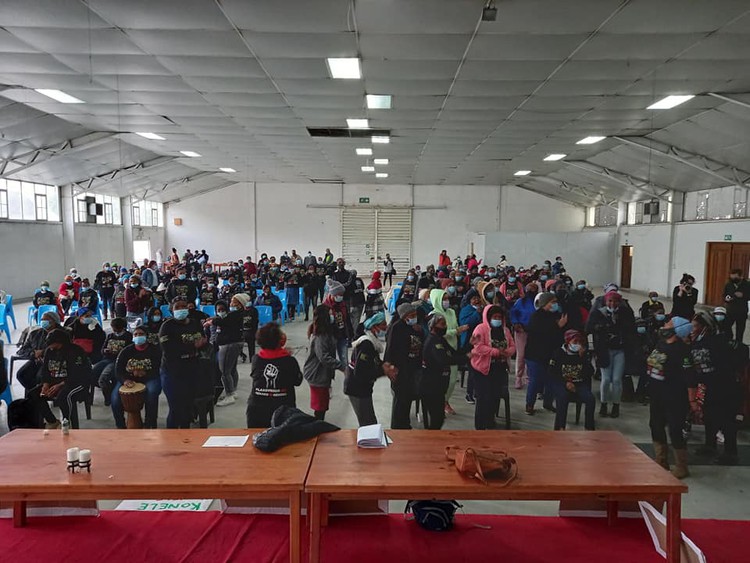 Farm workers from De Doorns, Wolseley, Stellenbosch and Ceres gathered in Worcester on Thursday for an indaba hosted by Women on Farms on their experience of accessing UIF in rural areas. Photo: Women on Farms/Facebook

Labour department inspectors are expected to visit farms in the Western Cape to investigate complaints by workers who are battling to access unemployment funds since the start of the Covid-19 lockdown.

Labour Minister Thulas Nxesi made the promise to farm workers on Thursday at an indaba hosted by the Women on Farms organisation. The event was attended by more than 150 workers, mostly women, from De Doorns, Wolseley, Ceres, and Stellenbosch.

During the event, farm workers shared their difficulties accessing Unemployment Insurance Fund (UIF) benefits, especially during “off season” on farms when they are not employed for a period of a few months. Many farm workers have also been struggling to access UIF services because of poor service or closures at labour offices. The Robertson office was affected by the lockdown last year and operations were suspended for months.

Some issues raised by farm workers included poor services at labour centres, trouble accessing UIF during lockdown and the death benefits of their partners, and seasonal workers having issues with claiming their UIF after farmers signed off that they resigned.

In response to the workers, Nxesi said that the department needed more information on specific farms in order to hold employers accountable “and set an example”.

“We can’t be on each and every farm, but we can have a targeted approach,” Nxesi said.

Other department officials at the indaba included Mawele Ntamo, Chief Director of Provincial Operations, David Esau, who is chief provincial inspector, and Tembekile Hoza of the Labour Centre in Worcester.

Hoza addressed several questions from farm workers about the labour office in Worcester and satellite offices in the surrounding areas.

A seasonal worker told the gathering that she could not claim her UIF because the farmer incorrectly signed off that she had resigned from her job, when this was not the case. (You can’t claim UIF if you have resigned.)

To this, Hoza explained that when there is a dispute over termination , the matter needs to be referred to the Commission for Conciliation, Mediation and Arbitration (CCMA).

A farm worker from De Doorns took issue with the competency at the local labour office.

Ntamo told the group that labour centres were negatively impacted by the Covid-19 lockdown last year but that offices such as the Robertson office are back in full operation.

He said with complaints about bad service workers should report the specific officials to the department.

He urged the farm workers to give all their details and complaints to Women on Farms who will send it to him directly. He also asked workers to inform the department directly when farmers fire staff because officials are not always made aware of this, he said.

Esau asked for the names of all the farms where inspectors needed to visit. He said that the department “is considering an intensive program when it comes to inspections” to prevent instances where farm owners are able to make it seem like everything was fine.

The group, led by Women on Farms, then marched to the Worcester Labour Centre and handed over a memorandum, demanding that the department take action against farms violating farm workers’ rights.

Next:  IPID finds “no misconduct” in using a water cannon on SASSA beneficiaries