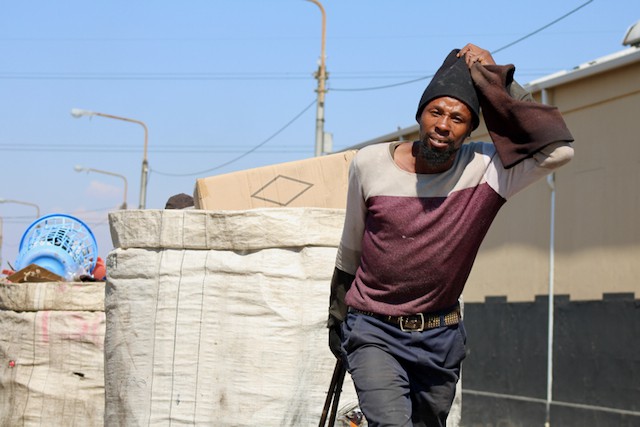 Nyaooa Khakanyo is a reclaimer with the African Reclaimers Organisation. He says he doesn’t know how he is expected to make a living if Pikitup starts separation at the source. Photo: Masego Mafata

The African Reclaimers Organisation (ARO) is concerned that plans by Pikitup Johannesburg (SOC) Ltd in Johannesburg to expand its ‘separation at source’ recycling programme may leave informal waste pickers without an income.

In 2019, ARO started a pilot project with residents in Brixton, Auckland Park and Bordeaux South called “recycling with reclaimers”. The aim was to encourage residents to give their recyclable materials to reclaimers.

Luyanda Hlatshwayo, a reclaimer with ARO, said the pilot project has been beneficial for both residents and reclaimers. They are provided with income security and improved working conditions, while residents have people collecting their recyclable materials.

When the project started, Eli Kodisang, an organiser at ARO, told GroundUp that one of the project’s goals was to use some of the money that the reclaimers saved the City to pay the reclaimers a service fee. This fee would help stabilise their income because the prices of recycled materials fluctuate, he said.

The success of the project prompted ARO to make plans to expand its programme to other areas in Johannesburg from July this year, said Kodisang.

Kodisang said ARO had engaged private companies for assistance in the expansion of its pilot project, because it had experienced “a lack of cooperation from the City”.

Reclaimers are being excluded from the City’s waste management and recycling plans, Kodisang told an online discussion hosted by ARO, Brixton Community Forum and Bordeaux South Residents’ Association on 29 April.

The expansion of the ARO project is threatened by the implementation of Pikitup’s separation at source collection plans.

Pikitup’s plan includes charging properties valued above R350,000 a R50 recycling fee to cover costs. Currently, the project has been piloted in only a few suburbs in Johannesburg.

The implementation of the recycling fee was tabled in a request for the approval of proposed waste management service tariffs for 2021/22, which was presented to the City mayoral committee on 16 March. The fee is expected to be paid in addition to existing levies for waste management and disposal. If approved, the tariffs will be effective from 1 July.

“I’ve been doing this [job] for more than 12 years. A lot of livelihoods will be disturbed by decisions made by people who don’t understand the industry the way reclaimers do,” said Hlatshwayo.

“People are being asked to pay for something that is not being delivered [by the City] while killing off a system that is highly efficient and needs support. The R50 will not address recycling infrastructure needs,” said Kodisang during the online discussion.

Samson said it is estimated that reclaimers save municipalities up to R748 million a year in landfill space by diverting recyclables away from landfills.

According to Hlatshwayo, when the City introduced separation at source it led to reclaimers clashing with extended public works programme employees contracted by the City to collect and sort the materials.

Residents working with ARO have also said they are concerned about Pikitup’s plans. “We’ve had great success in building a partnership with the reclaimers through the ARO pilot project. We are not sure what this R50 fee will be used for. Residents and reclaimers have not been consulted,” said Angela Schaefer, a member of the Bordeaux South Residents’ Association, during the online discussion.

“As ARO, we really want to encourage residents to demand that the City implements evidence-based policies. There’s no evidence to show the success of the City’s [Pikitup’s mandatory separation at source] pilot project,” said Kodisang. 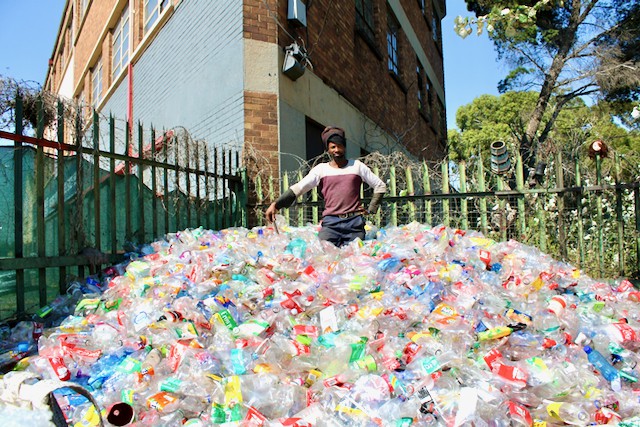 Nyaooa Khakanyo stands in a pile of plastic bottles collected by two informal reclaimers over two weeks. According to an infographic published by ARO, the average amount of recyclable materials collected by a single reclaimer per day through the pilot project was 128kg. Photo: Masego Mafata

We followed up on our inquiry numerous times. GroundUp also sent questions to the City of Johannesburg, but we are yet to receive responses from Pikitup or the City. The article will be updated once we receive the responses.

Previous:  Robben Island Museum is ailing and yet R102 million of its infrastructure grant went unspent