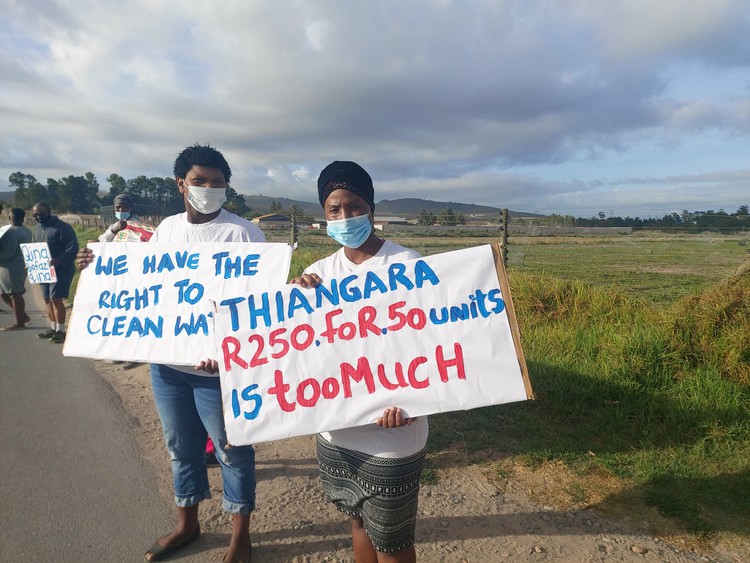 Farm workers from Thiangara, a vegetable farm bordering Kraaifontein and Stellenbosch, are accusing the owner of hiking their electricity rates, not providing running water and failing to renovate their dilapidated houses.

The workers, supported by activists at Women on Farms Project (WFP), picketed outside the farm’s gates earlier this month.

This is not the first time workers have complained about the conditions on Thiangara. In 2019, the Western Cape Chief Inspector David Esau was called to inspect the farm.

On Friday, Esau told GroundUp that after his last visit, he ordered the owner to rectify various issues such as the lack of ablution facilities, not paying for sick or family responsibility leave, and work on public holidays. He also told the owner to provide the necessary personal protective equipment (PPE) to the farm workers.

Esau said that the owner provided proof of compliance and a follow-up inspection was done. The compliance order was then withdrawn.

But Esau said that in light of the worker’s recent protest, the Department will visit the farm again.

One of the main issues workers raised was being overcharged for electricity. They had been paying R200 for 50 units every week since 2017 until it was recently increased to R250.

Louisa Warries, a worker on the farm, said they earn about R970 per week and the electricity is deducted from their weekly wages.

“We want him to pay back our electricity money,” said Warries. She also complained that the workers had to spray pesticides on the vegetables without being given PPE.

Colette Solomon, director at WFP, said that the “unilateral rate setting of electricity” on farms by owners was a common problem. “Farmers can literally set the rate at anything they want to per unit, and that’s what they’re doing,” she said.

But the farmer, Arthur Gee, told GroundUp that there is nothing “unfair” about the electricity rates he deducts. He said that the fee not only covered usage but also the service charges. Gee said that he increased the price because of an expected electricity increase.

Another issue on the farm is the lack of running water and the fact that there are no toilets in workers’ homes. There are only pit toilets outside.

“There isn’t even water close to us,” said Tara Warries. She said that they have to walk to surrounding farms to fetch water.

Warries said that her house was so badly dilapidated and “broken” with a large crack in one of her walls.

Both Louisa Warries and Syster have lived in their houses for 12 years and Tara for six years.

In response, Gee said that the houses were in a great condition when workers first moved in. He said he was not willing to pay for repairs. Gee also said that there are people living on the property without permission and that he would not “fix homes for other people.”

Regarding the water, Gee said he can’t afford to install taps on the property. He said he fills up ten litre canisters with water and drops it at workers’ homes.

Louisa Warries confirmed this but said it was not enough because over the weekends they have to source their own water.