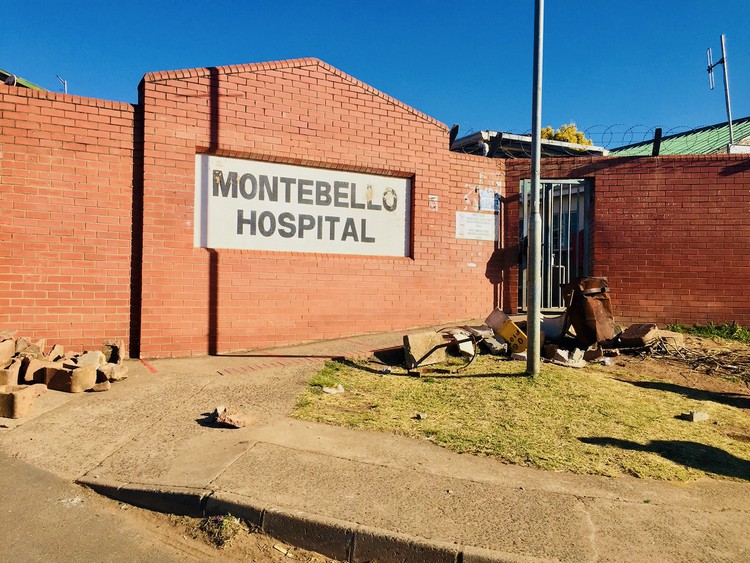 Montebello hospital in Ozwathini, between Pietermaritzburg and Tongaat, has been shutdown since Monday. Photo: Nompendulo Ngubane

Worried about their safety, staff at Montebello Hospital downed tools on Monday and left the hospital with the gates closed. But in this case, the trigger for the action was not Covid-19, but fear of local protests by residents demanding jobs at the hospital.

“Outside we are scared of the community and inside we are at risk by working under appalling conditions. The hospital is not taking [adequate] safety precautions when dealing with Covid-19 patients,” said a staff member who has been working at the hospital since 2016.

The hospital in Ozwathini, about an hour outside Pietermaritzburg, closed after local residents protested for two weeks. Patients were moved to Stanger hospital. Some were moved by family members. Others were discharged.

Residents have been demanding jobs as cleaners, groundsmen and kitchen staff since 2015.

Staff told GroundUp that the protests turned violent and workers were blocked from entering the hospital.

The main access road was blocked with trees, rubbish and stones. A section of the tar road was dug up to stop vehicles traversing it.

“We were receiving threats every day when coming to work. It became worse last week. The community has become violent. They have been camping outside the hospital since last week. Workers were not allowed to go inside the hospital. We had to find ways of getting inside and going out,” said a staff member.

She said that protesters prevented cleaners and kitchen staff coming inside. So dieticians and physiotherapists had to assist with dishing up food, at least from Monday to Friday. But they do not work on weekends, and so patients did not eat until Monday, said the worker.

She said the sinks are blocked and floors are flooded because of blocked pipes.

A protester said the hospital will remain closed until the department and the hospital management listen to them. She said that the protest was sparked by the community seeing new workers being employed. “We appealed to the hospital that we become part of the employees doing the basic work which doesn’t need qualifications. They don’t do that. Instead you see people who are not from the area occupying those positions,” she said.

She said there had been a meeting with hospital management and the local chief previously. “They gave us the impression that they understood. It is not happening. They employ their friends,” she said.

GroundUp tried all week to get comment. The national department referred us to the province. KZN health spokesperson Agiza Hlongwane sent a text message: “Thanks for the opportunity but we will not be commenting.”

Next:  “We will cause havoc” warn disgruntled church members