City says residents and organisations must work together to formalise reclaimers 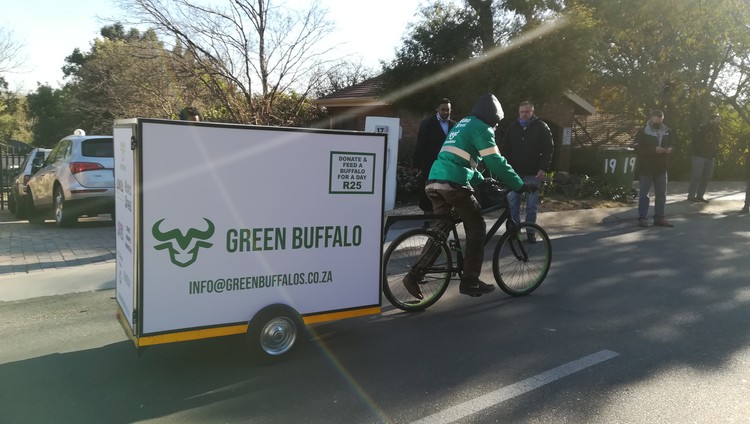 Residents of Sunninghill, Johannesburg, have created a “trike” for reclaimers in their neighbourhood. The bicycle, with a trailer attachment, will be used to transport recyclable materials. Photo: Zoë Postman

About 20 reclaimers in Johannesburg will soon be carting their recyclable materials around with prototype “trikes”.

The bikes with a trailer attachment were donated to the reclaimers — who are members of African Reclaimers Organisation (ARO) — by residents of Sunninghill with assistance from businesses.

Dave Braithwaite, an engineer from Euro Steel who designed the trike, said the width and height of the trailers were effectively smaller than the reclaimers’ trolleys because it had enclosed sides. This was to be compliant with City bylaws on the road, he said.

Reclaimers are currently able to load about 250kg on the tolleys.

On Thursday, Sunninghill residents Sean Jory-Burgess and Shaun Slabber from the Green Buffalos organisation showcased the first prototype to reclaimers. It forms part of a project to formalise reclaimers in the neighbourhood. The reclaimers were also given uniforms with their names on it.

Steven Leeuw, from ARO, said this initiative was crucial to bridge the gap between residents and reclaimers in Sunninghill.

“There have been many instances where residents had called the security company to remove reclaimers from the neighbourhood because they thought reclaimers were criminals or were responsible for leaving rubbish around their houses,” he said.

He said Green Buffalo and ARO would still engage on how to improve the prototype according to reclaimers’ operational needs.

Slabber admitted that he was one of the residents who had called security on reclaimers. “Unfortunately, reclaimers are blanketed with criminal activity by residents in the neighbourhood because residents are not educated about the work they do,” he said.

Stanley Itshegetseng from the City of Johannesburg’s Environmental, Infrastructure and Services department said the City supports such initiatives because it recognises reclaimers’ role in the City’s waste management.

“In Johannesburg we have three years before our landfills sites are full to capacity. The work these guys [reclaimers] are doing is assisting us to expand the lifespan of the landfills so that we can open up alternative landfills spaces,” he said.

If organisations and residents ensure that reclaimers have uniforms, a database for people who work in the area is created and residents start to know the reclaimers’ names, they will start to embrace them, he said.

The City had identified reclaimer organisations in Johannesburg and invited the leadership to be a part of the City’s projects, he said. A collaboration between the City, communities, corporate companies and reclaimers is necessary, said Itshegetseng.