Freedom Under Law says that although CPS is in business rescue, the company must still repay profits as ordered by the Constitutional Court 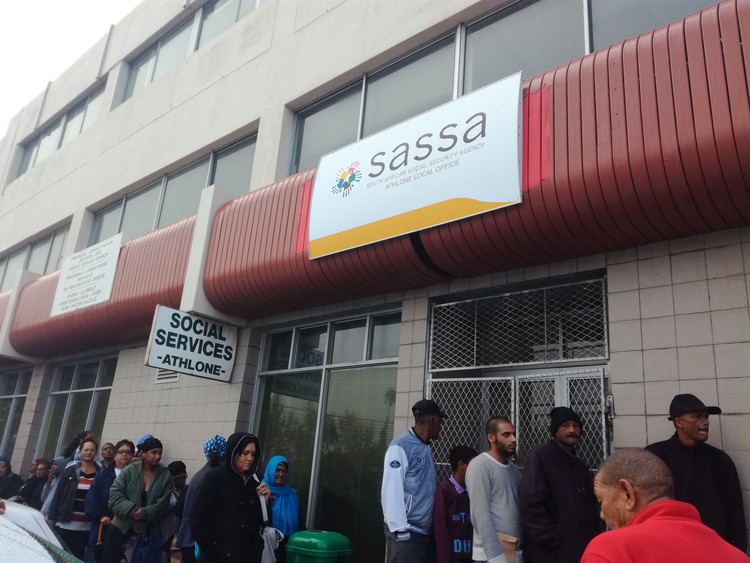 People queue for social grants in Athlone. Freedom Under Law says profits made by Cash Paymaster Services, the company that used to pay out social grants, should be paid back. Archive photo: Barbara Maregele

Cash Paymaster Services should have to pay back profits to the South African Social Security Agency (SASSA) even though it is in business rescue, the Constitutional Court has been told.

CPS, a subsidiary of Net1, was contracted to pay social grants by SASSA in 2012. The contract was extended twice, ending in September 2018 when the Post Office took over grant payments. The Constitutional Court ruled in 2014 and again in 2017 and 2018 that CPS had no right to benefit from an “unlawful” contract and ordered the company to file audited statements of expenses, income and net profit earned under the contract “within 60 days of the completion of the five-year period for which the contract was initially awarded”. Within 60 days after that, the court said, SASSA must obtain “an independent audited verification” of the CPS statements and file this with the court.

Freedom under Law (FUL) took up the matter, arguing that profits should be paid back to SASSA.

But in March this year Net1, CPS’s parent company, applied to the South Gauteng High Court to have CPS placed under business rescue. Net1 CEO Herman Kotze said in the application that when the Post Office took over payments in 2018, CPS was left “financially distressed”. The company was placed in business rescue in May, according to Net1’s most recent quarterly report. CPS had been rendered “insolvent”, the report says, and business rescue practitioners were appointed on 18 May.

In court papers filed in June, CPS argued that litigation was a poor way of retrieving profits from the company because it was in business rescue.

“Business rescue means there is now a moratorium on legal proceedings against CPS. Because Freedom Under Law seeks substantive relief against CPS (to pay back profits), this application is hit by the moratorium,” said CPS.

CPS said FUL “gives the game away” by assuming that the intention of the no-profit principle is to get CPS to pay back profits. CPS said the court had not made such an order.

If it is within the interest of justice to order CPS to pay back profits, CPS said, there must be an agreement on the facts and how much profit was made before such an order is made.

However, in its August application to the Constitutional Court, FUL said the decision by CPS to place itself in voluntary business rescue should not affect its obligation to pay back profits to SASSA. FUL said that under the no-profit principle, which states that no party may make a profit from an unlawful contract, CPS is not entitled to keep any profits whether it is in business rescue or not. FUL said the no-profit principle had been determined by the court in previous judgments.

FUL said CPS wrongly assumes that the moratorium prevents the court from retrieving any property, in this case profits, from the company. FUL argued that this rule only applied to property that was in CPS’s possession legally. If CPS is found to have made profit, the profit would be in its possession illegally which meant the company was still liable to pay it back, said FUL.

There is disagreement about how much profit was made. On behalf of CPS, accounting firms KPMG and Mazars prepared a report for SASSA concluding that CPS made profits of about R252 million in the period from April 2012 to September 2018.

But in a detailed 162-page report, the accountants consulted by SASSA, RAiN, argued that CPS had bulked up its expenses and therefore understated its profits by a massive R843 million for the period. RAiN estimated that CPS actually made profits of R1.1 billion — not R252 million — over that time.

“Whatever the accurate amount, when it is finally determined, it is likely that CPS will be found to have made a substantial profit. Whatever profit CPS may have earned, this Court has emphatically stated, as indicated above, that CPS has no right to that benefit,” said FUL in its August application.

FUL said one of the main reasons why the National Treasury was unable to approve RAiN’s report was because RAiN was not given full access to CPS’s financial records.

FUL has asked the court to order CPS to provide all the documentation needed for RAiN to accurately complete the audit. It has also asked the court to declare that CPS will be liable to pay the profit once it has been determined.

Ralph Lutchman, business rescue practitioner for CPS, told GroundUp all the parties were awaiting directives from the court.

“If the Constitutional Court orders CPS to repay any profit made by it to SASSA then this will have to be considered by the business rescue practitioners and included in any business rescue plan agreed to by CPS’s creditors,” said Lutchman.

Next:  Lottery executive could face probe by accountants’ oversight body