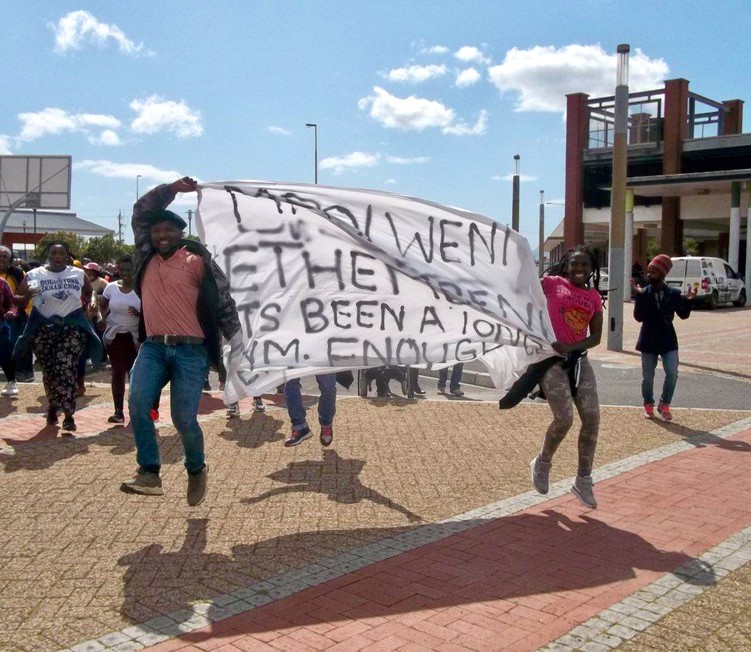 Scores of shack dwellers marched to the sub-council offices in Kuyasa, Khayelitsha, on Monday to demand that the City of Cape Town provide basic services. Photo: Vincent Lali

Scores of shack dwellers marched to the sub-council offices in Kuyasa, Khayelitsha, on Monday to demand that the City of Cape Town provide basic services.

There are about 1,200 households in Empolweni, Ethembeni and Riverside informal settlement along Baden Powell Drive in Khayelitsha without basic services. These settlements formed in April during level 5 of the lockdown.

The protesters sang struggle songs and demanded that sub-council manager Lulamile Rorwana accept their memorandum. Rorwana met them outside his offices and promised to hand the memo to senior City officials.

Ward councillor Xolisa Ngwekazi was present and said, “We demand service delivery in our informal settlements, where we live in squalor.”

Ethembeni community leader Nomazotsho Nobebe said, “Residents dump rubbish all over the place because we don’t have a facility to dump our rubbish in … We walk to Empolweni to relieve ourselves in about five smelly chemical toilets, which are always brimming with excrement.”

“The City is trampling on our right to dignity and living in a healthy environment. We want our human rights,” she said.

Empolweni leader Ntembeko Moyeni said they want the City to recognize Empolweni, Ethembeni and Riverside. “We are here to introduce our informal settlements to the sub-council so that the City doesn’t say it doesn’t know us … I don’t see why the City says we are not recognised informal settlements even though the Western Cape High Court said we could continue to stay on the land.”

He was referring to a Western Cape High Court ruling in April that the City allow 49 evicted former backyarders to stay in Empolweni.

“It produces water slowly in the mornings when Zweledinga residents are also busy using their taps,” he said.

Moyeni said the shortage of toilets caused long queues and the toilets were filthy. He said rats bred on rubbish and came into their shacks and ate their food.

Resident Nosicelo Shongoza said, “Currently, we depend on one water tank. We need more.”

She said residents had put their rubbish where the City cleaners could easily collect it, but it had piled up and now blocked the road.

Mayco Member For Human Settlements Councillor Malusi Booi said, “The City has tried to prevent the illegal occupation of this particular piece of land to prevent this sort of situation from happening.”

“As it pertains to Empolweni, the court has allowed 49 households to temporarily stay on a piece of the land in question until the court sits again.”

“Those who succeed in occupying illegally and knowing there are no services on the land unfortunately do so at own risk as there is a reason why the City has not designated some areas for housing.”

“Ethembeni formed after a stormwater retention pond was unlawfully occupied,” Booi said. This pond was dry when it was occupied before the winter rains. “Detention ponds flood every winter, and therefore they are not suitable for habitation.”