Inside the Pietermaritzburg mortuary where workers are on a go-slow

Workers in the Fort Napier Medico Legal Mortuary in Pietermaritzburg are on a go-slow, demanding an increase in wages and better working conditions. They say that corpses are piling up, that the smell is unbearable, that the equipment is old and broken, and that they do not get protective clothing or cleaning materials. GroundUp went to investigate.

The smell hits you as soon as you enter the reception area. Workers say the air-conditioning system has not been working since 2014.

The workers, who did not want to be named for fear of victimisation, took GroundUp on a short tour of the mortuary.

Outside the reception area is a kitchen, and the toilets that workers share with the public. Two staff toilets have been out of order for five months, workers told GroundUp.

Through the next door is the first cold room, where bodies are dissected. The plastic floor tiles are dirty and the smell is worse. Workers say the water pipes into the sinks don’t work properly and it is hard to keep the room clean.

In two more cold rooms dozens of bodies are stacked on metal trays. The first is the room where unidentified bodies are kept. Workers say some have been here since 2010.

The smell is unbearable. There is dried blood on the floor and some of the bodies have decomposed. Some bodies are not covered, with a leg sticking out from under the plastic sheet. Crutches lie on top of one body.

Workers say they were brought cleaning materials last week during the visit of health MEC Sibongiseni Dhlomo. Before that, they say, the last supply of cleaning chemicals was in 2014.

Employees say they do not get proper protective equipment. GroundUp saw some employees in navy blue overalls and one in his own clothes. None had protective footwear.

An employee who has been working at the mortuary for years said working conditions had become terrible. He said for years workers had complained to the health department but they had been ignored.

“We have unidentified bodies dating back to the year 2010. There has been a backlog for years. Those bodies should have been buried by the government. That has not been done. The bodies have decomposed. We get inside that section of the mortuary wearing our own clothes. We have no protective clothing for that. You can’t go in there wearing a jersey or jacket. You have to take it off. You come out covered in a smell. The department is aware of that. It has not done anything,” said the worker. 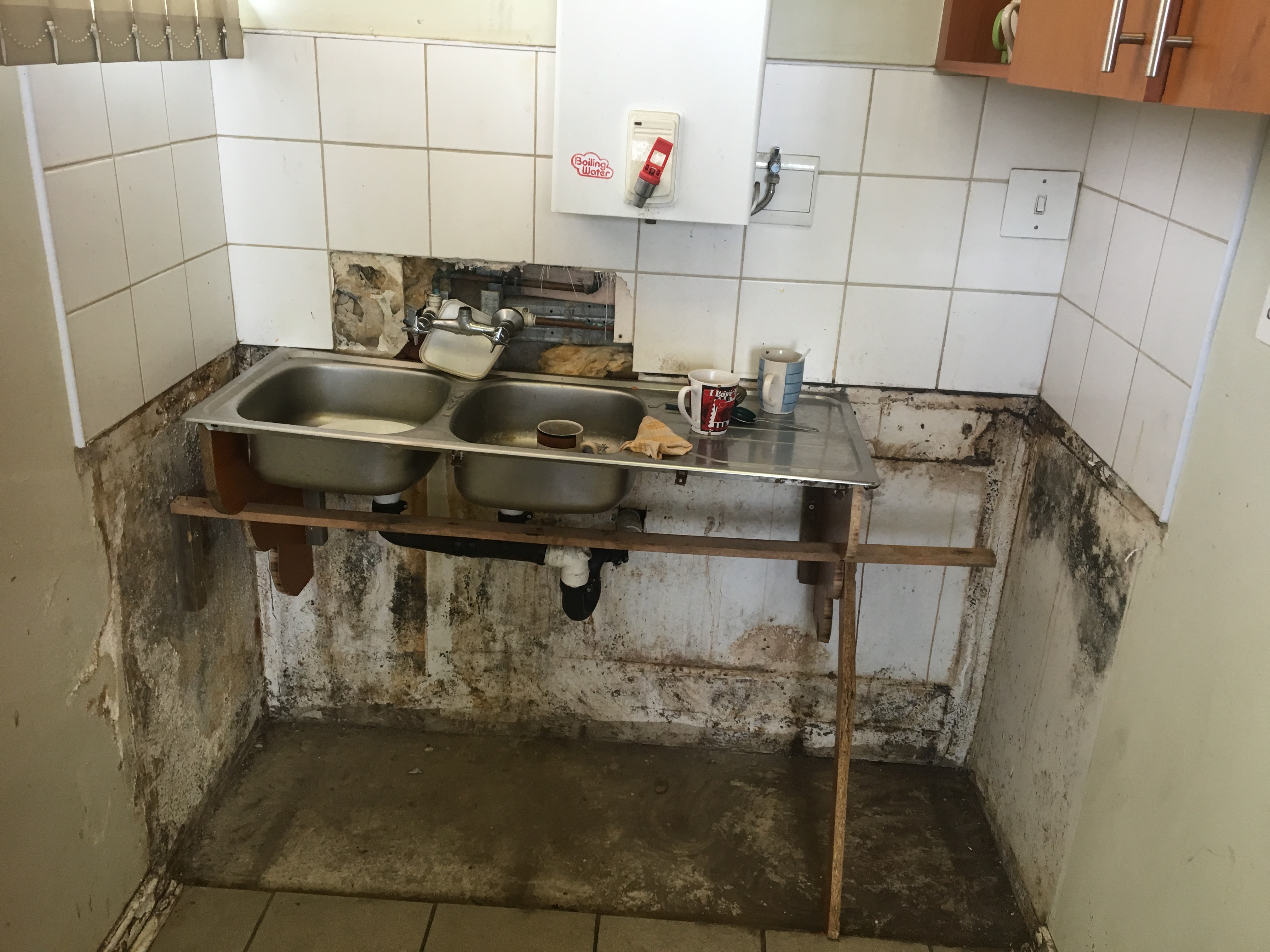 One of the kitchens in the Fort Napier mortuary. Photo: Nompendulo Ngubane

The kitchen where some of the workers have their lunch is close to the cold room with the unidentified bodies. The smell is very strong.

“A man needs to eat,” said one worker when asked how he managed to have lunch there.

“The trays that we use when dissecting the bodies are leaking. During the dissection the smell passes to the reception area. Since the air-conditioning system is not working, it is difficult.”

“We don’t even have basic cleaning materials. The last broom was bought by a worker. There was no broom at all. The cleaning chemicals were brought in last week. They did that for the cameras because Dhlomo was here. It was all for the cameras,” he said.

Another worker said that bodies were piling up and the mortuary was short staffed. “We are earning R10,000 a month. With all the work that we do, that’s nothing. We are expected to do 12 bodies a day. That is not possible at all. Currently we are doing two bodies. The workload is too much. We have three mortuaries that are not operating. Mortuaries in Howick, Mooiriver and Richmond have no cold rooms. The bodies come to this mortuary. All that work falls on the staff here,” said the worker.

Outside the mortuary, the smell lingers, clinging to clothes and skin.

“All the department has done is to ignore the workers’ demands,” said Cosatu provincial chairperson Skhumbuzo Mdlalose. “We have been there and we know what those workers are going through. It is shocking and an insult to the workers.”

GroundUp sent detailed questions to department spokesperson Ncumisa Mafunda. In response, the department issued a statement (below) which did not address any of our questions.

We asked whether this was the department’s only answer. We were told: “It is. We have been told that none of the issues raised in your query are true.”

The Department is pleased that the backlog caused by incomplete autopsies has been cleared, and wishes to thank all employees who rolled up their sleeves and put the needs of grieving families and the country first in this regard.

There have subsequently been threats to destabilise normal operations at other mortuaries in the province. While this is being investigated, the Department wishes to caution members of the media to be wary of being used by unscrupulous individuals who are running an illegal parallel structure that appears to be competing with the ongoing formal discussions to resolve matters between Forensic Pathology Services (FPS) and the Department.

These legitimate workers’ concerns are being dealt with at the National Bargaining Council where Organised Labour, and the Department remain confident that an amicable solution will soon be found.

Regrettably, however, this has not stopped certain employees from staying away from work illegally; and apparently tampering with certain infrastructure such as the air-conditioning system, so as to adversely affect normal operations. Others have also suspiciously called in sick in large numbers, failing to report for duty.

The Department wishes to assure the public that it has measures in place to prevent the accumulation of bodies, should staff continue in this illegal action.

The Department will not hesitate to exercise its rights regarding these matters, in terms of the Labour Relations Act and wishes to remind workers who are classified as essential services, such as FPS, that engaging in illegal strike action could have dire consequences for them.

Next:  Bo-Kaap protesters in stand-off with crane