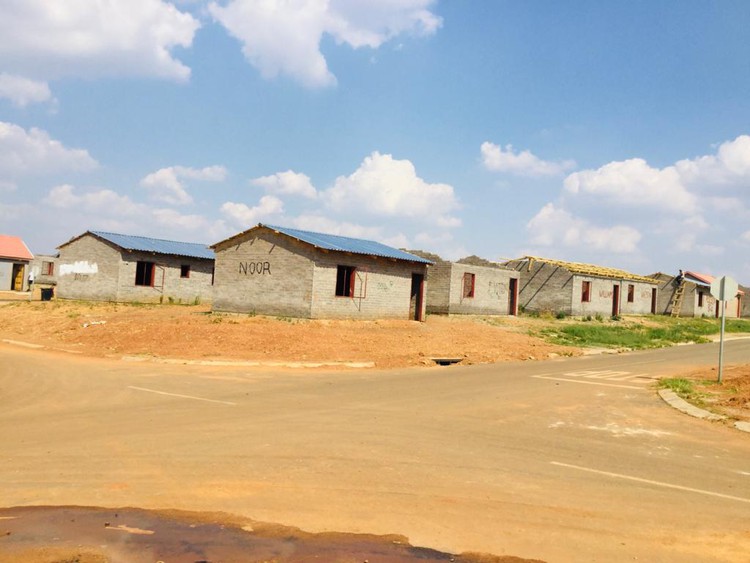 A group of residents who occupied RDP houses in Mackenzieville, Nigel a year ago are now accusing a rival group of selling some of the homes they occupied. Photo: Kimberly Mutandiro

A group of residents who illegally moved into RDP houses in Mackenzieville, Nigel a year ago are now accusing a rival group of selling some of the homes they occupied.

The houses are apparently being sold for anything between R10,000, for incomplete structures, to R70,000 for completed ones.

Arla Park backyarders occupied the RDP houses earmarked for residents of Snake Park informal settlement in December 2019. The Mackenzieville housing project has been marred by racial tension from the onset as the occupiers are mostly coloured, while the legal beneficiaries are mostly black.

In July, GroundUp reported that over 500 families occupying the complete and incomplete RDP houses would face eviction when lockdown ended, after the City of Ekurhuleni had been granted an order by the Gauteng High Court. The occupiers argue that they will be left homeless should the eviction be carried out.

The number of people occupying the houses has increased since July.

“It is sad that while we wait for the matter to be finalised, our poor coloured residents are now suffering. Some people are now even afraid to visit relatives in case their houses get sold while they are away,” said Zill Rittles from the Greater Nigel United People’s Parliament.

Rittles said that over 40 houses had already been renovated and sold. “The business continues and community members are living in fear of being victimised,” she said.

Elizabeth Joubert, a 64-year-old occupier, said her nephews who moved into a separate house were victimised and forced out of their home by people who wanted to sell the house. When she tried to intervene, she was threatened. “What is happening here is terrifying. If the people keep on selling houses, where are we going to end up? Now l am afraid to leave my house. I have to guard this house with my life because it is all l have,” Joubert said.

Before moving into the RDP house in January, Joubert said she lost count of how many houses she had rented to date. She said she wrote a five-page letter, begging to be allowed to stay in the house.

The City of Ekurhuleni spokesman Themba Radebe said they were not aware that the occupied houses were now being sold.

Radebe confirmed that at the end of lockdown, the eviction order against the occupiers would be implemented. He said no alternative accommodation would be provided for the occupiers.

Next:  “We will celebrate Christmas in sewage again”