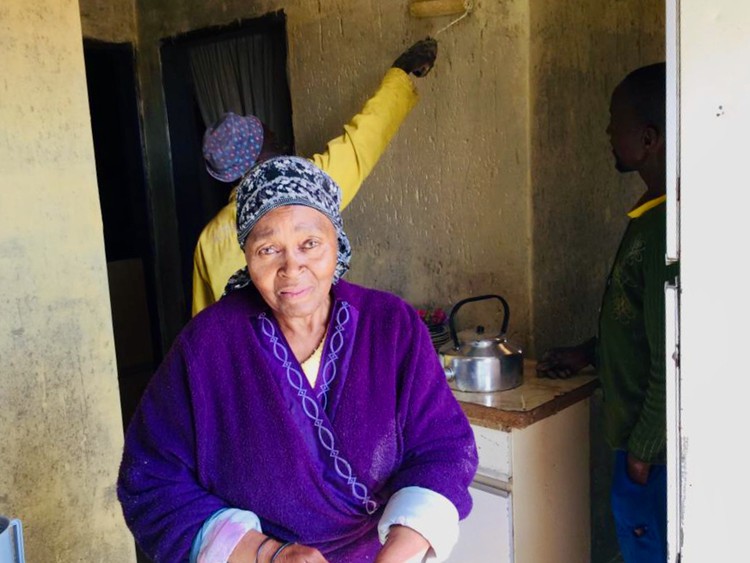 Aurelia Maboya, 79, moved into an RDP house in Mackenzieville Extension 2 two months ago. She has been using her pension savings to fix up the house. “The thought of Red Ants coming to drag an old lady like myself from this house is terrifying,” she said. Photo: Kimberly Mutandiro

Over 500 families occupying complete and incomplete RDP houses in Mackenzieville Extension 2 in Nigel are facing eviction after lockdown now that the City of Ekurhuleni has been granted an order by the Gauteng High Court.

The families say they have nowhere else to go and they will fight to remain in the houses. Occupants continue to spend money fixing up the RDP houses despite the eviction.

Together with the Greater Nigel United People’s Parliament (GNUPP) – a civil society organisation which led the occupation – the families have appointed a lawyer and the appeal is scheduled to be heard in August.

In December 2019, Arla Park backyarders illegally occupied the RDP houses earmarked for residents of Snake Park informal settlement. But the occupiers claim the housing project was marred by racism and corruption.

Zill Rittles of GNUPP said, “The eviction order comes as a disappointment to coloured backyard dwellers who for the first time felt what it was like to have RDP houses after having suffered racial discrimination in the hands of corrupt municipal officials for so many years.”

“Certain officials were unfair to us coloureds, refused to register us for houses, while black people were registered. That is the reason why some of the people who have occupied the houses are not on the housing database.

“We were short-changed and houses belonging to some of our people who qualified were sold by corrupt officials,” said Rittles.

Aurelia Maboya, 79, moved into a house two months ago. She has been using her pension savings to fix the house bit by bit. The house had no roof when she moved in. She also bought windows, doors and a toilet.

“I have never had a house of my own. For years l waited … To my surprise other people got houses. It’s good to have my own house. I love it here because I am peaceful. I cannot imagine myself being evicted. The thought of Red Ants coming to drag an old lady like myself from this house is terrifying,” she said.

“The government must feel for me and allow me to continue staying here. I am now an old lady who no longer has strength to do a lot of things. I want to stay here for the rest of my remaining days on earth,” said Maboya.

Pantsu Sekobela, a community representative and resident of Snake Park, said, “Our community has suffered for a long time waiting to move into those houses. We were waiting for the houses to be completed first before moving in. Maybe if things had been done properly coloureds who qualify for houses would have also moved in, but they decided to put matters into their own hands. Snake Park residents cannot wait to move into those RDP houses.”

A court order from March prevents residents of Snake Park going near the RDP houses.

Ward Councillor Wollaston Labuschagne (DA) said in a statement: “This housing project has been in limbo for years now … The Human Settlements Department officials rarely convey any information, especially the previous project manager who was suspended in 2019 on allegations of financial mismanagement and insubordination.”

“This housing project started in 2014 and should have been completed in 2019, with 600 RDP houses. Yet, six years later and only 54 units have been completed … According to MMC Lesiba Mpya, the latest targeted completion date is March 2021, seven years after the project commenced.”

Labuschagne said he is awaiting feedback from Ekurhuleni Human Settlements Department on whether alternative accommodation has been arranged for the residents facing eviction.