As thousands prepare to travel long-distance, operators say they need help with masks and sanitisers 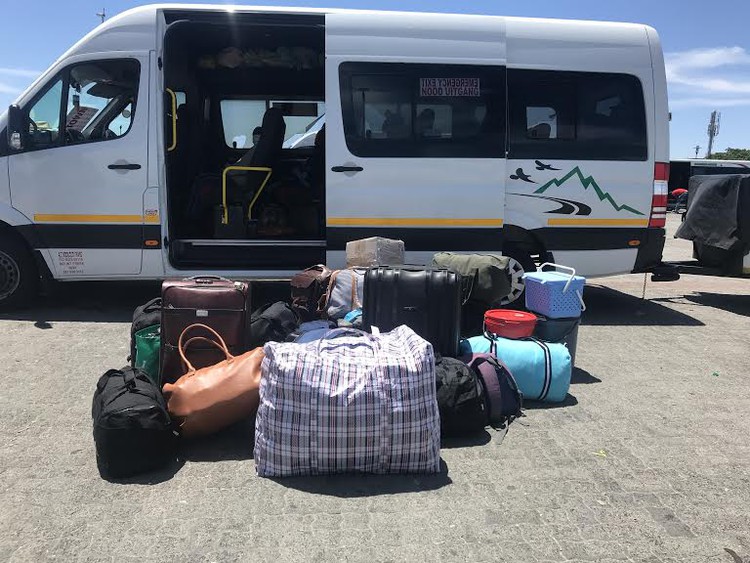 As tens of thousands of people prepare to travel home for the holidays, taxi owners say they are getting no help from government with masks and sanitisers to protect passengers from Covid-19. Photo: Tariro Washinyira

Taxi owners have called on the government to help them protect passengers from Covid-19, as tens of thousands of people prepare for long-distance travel home for the holidays.

Thabiso Molelekwa, spokesperson for the South African National Taxi Council (SANTACO), which was created in 2001 to govern the industry and act as the principal mouthpiece for taxis, told GroundUp that the taxi industry is not getting any help from the government with the supply of masks and sanitisers.

Cape Amalgamated Taxi Association (CATA) provincial chairperson Victor Wiwi accused the government of neglecting the industry at a time it most needs help.

“A trip to the Eastern Cape is about 14 hours. Both drivers and passengers would need at least two masks to ensure hygiene and safety but there is zero support from the government regarding that matter. People want to visit their families in Eastern Cape and need to feel safe there on the taxi,” he said. [One surgical mask is good for a trip this long. - Editor]

He said taxi owners were paying R150 for a 1-litre bottle of sanitiser which lasted for one trip. In previous years before Covid-19, a taxi would carry about 15 passengers but this year each can only carry about ten people. [Sanitiser can be purchased for approximately R80 per litre. - Editor]

Drivers at Joe Gqabi taxi rank told GroundUp they tried hard to take precautions and follow health guidelines but they could do more with government support.

At Joe Gqabi taxi rank on Tuesday Sipho Khumalo’s taxi was fifth in the queue to load passengers to Eastern Cape. He said he had been waiting for his turn since Sunday. He said usually demand is high and taxis make money during the Christmas holidays, but this year people are not travelling because they do not have money.

“Covid-19 has brought lots of hardship. We are struggling to get business because many people have lost their source of income. Circumstances have forced them to spend Christmas here away from their families. It is sad; they can’t afford even to send a sweet.”

Molelekwa said loss of revenue which exposes owners to repossessions is the main challenge reported by their members.

Asked if the council had formulated guidelines for taxi operators and if it was monitoring adherence, he said, “Beyond what the government has put in place, SANTACO has communicated policy to all provinces that any driver found to be unmasked or driving a taxi with an unmasked commuter will get a spot fine of R500.” SANTACO had patrol vehicles and rank managers to ensure enforcement, he said.

Long distance operators had to ensure that all passengers in the taxis had their temperatures checked and had masks, Molelekwa said, and that taxis did not exceed 70% loading capacity. “Every two hours, taxis must take a break and allow passengers to stretch their legs and take fresh air. Taxis must equally be open for circulation of air. No one is allowed to unmask during the trip.”

Spokesperson for Western Cape MEC Transport and Public Works Bonginkosi Madikizela, Ntomboxolo Makoba-Somdaka, said the MEC had distributed protective equipment to the taxi industry “at many events”. She said the issue had not been raised by operators when the MEC had visited taxi ranks last week.

“The visit forms part of the Minister’s continued drive to spread information and to encourage travellers to follow Covid-19 golden rules of hygiene for keeping safe and to ensure public transport operators and passengers comply with the regulations,” the department said in a statement on 13 December.

In a voice note last week which he said he was recording at Joe Gqabi taxi rank, Madikizela said it was important for people to adhere to the health protocols. “We have to make sure that those people travelling on our roads understand the implications of not following these protocols.”

“We do not want to be forced to take drastic measures so it is really important for people to adhere to these protocols … People travelling between Eastern Cape and Western Cape must understand that our traffic officers will be very strict.”

GroundUp asked the national Department of Transport for comment on Thursday morning but had not had a reply from media liaison officer Esethu Hasane by the time of publication.

Next:  RETRACTED: Court sets aside eviction of social housing occupiers, for now