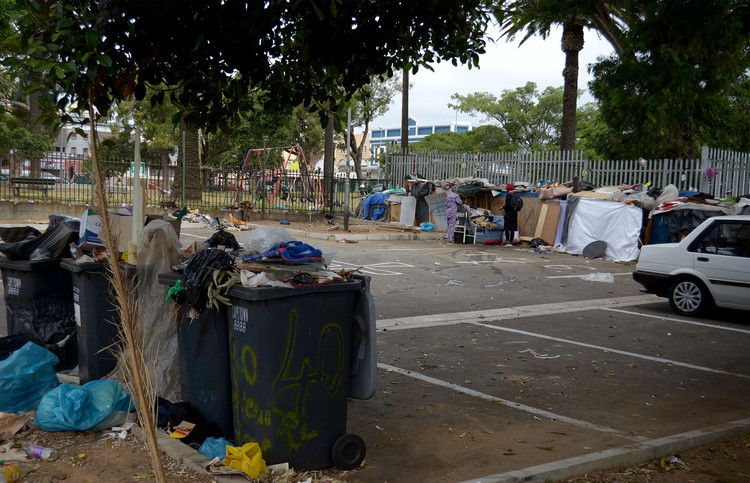 A group of homeless people have erected structures in the parking next to the Town Hall park in Woodstock, Cape Town. Photo: Steve Kretzmann

A stream of raw sewage flows from the back of the public toilets across the entrance of a homeless person’s shelter and the Town Hall Park on the corner of Victoria Road and Aberdeen Street in Woodstock, Cape Town.

Besides the stream of sewage, the park — with swings, roundabouts, see-saws and a concrete skate bowl — is littered with shattered glass, plastic and paper.

When visited on Saturday, 5 December, all the gates to the park were locked, with the only entrance being a gap in the fence at the edge of the skate bowl.

The town hall overlooking the park has broken windows, graffiti and has missing lettering over the entrance portico.

Besides the shelter in the park, a group of homeless people have also erected structures in the parking next to the park. Despite its grim state, the park was being used, although not by children or skateboarders. There were a handful of apparently homeless people lying in the shade of the trees, a young man on a bench who appeared to be studying, and a dozen or so adults who were socialising in cleaner patches of the park.

Mario Williams, who has lived a stone’s throw away for 40 years, said the situation has been deteriorating for years.

The skate bowl was built about two years ago – at a cost of R567,000 according to City of Cape Town Mayco Member for Community Services and Health Zahid Badroodien. But it was never used due to the state of the park, said Williams.

Williams, who is a SAPS sergeant, said when the park was built he bought his daughter a skateboard and roller blades, but she has yet to use the skate bowl.

“I can’t just let my daughter go to the park,” he said. “How do I send a young girl there with men and women washing and exposing themselves in the open?”

The town hall is also not able to perform its community function for residents.

Williams said he got married in the town hall in 2010 while guests’ children played in the park. They had their photos taken outside the entrance, with Devil’s Peak in the background, and everyone walked back to their house for the reception. That is unthinkable today, he said.

On the homeless people living around the park, Williams said the Woodstock community was generally accommodating and welcoming, but the situation was becoming unhygienic.

In response to questions about the state of the town hall and Town Hall Park, Badroodien said that there was “no sign of sewage flowing into the park”.

He said the gates to park were locked illegally “without our knowledge”. When we visited the park again on 14 December, the gates had been unlocked, but sewage continued to flow into the park.

Badroodien said the park is cleaned three times a week, and R55,000 was budgeted for park maintenance in ward 115. However, Ward 115 stretches from lower Woodstock to Green Point and includes The Company’s Gardens and Green Point Park.

Regarding the town hall, he said no major repairs had taken place in the last three years, but minor electrical and plumbing repairs were carried out by an internal maintenance team. The hall was broken into during lockdown level 5, with damage to the electricity meter box, doors, locks, and the recreation room. The last time it was booked, he said, was on 5 November for a film shoot.

Regarding homeless people constructing shelters in and around the park, Badroodien said the City offers social assistance, but many people refused any form of help. “Accepting assistance will include access to a shelter or safe space where access to food, water and sanitation is on offer. They cannot be forced to accept help.”

Ward 115 councillor Ian McMahon, who was elected in a by-election on 9 December, said he noted the sewage in the park and the state of the town hall and logged a complaint with the City.

Aquila David and Geneva Abraham, who live in one of the several cardboard and plastic structures in the car park, said they made an effort to keep their surrounding area clean, although this did not seem apparent. They said people brought food for them on Sundays and Thursdays and Woodstock residents didn’t bother them.

Asked if they’d like to go somewhere else, the pair were non-committal. Abraham said she would like to go “home” which she said was in Maitland, but would not be drawn on why this was not possible.