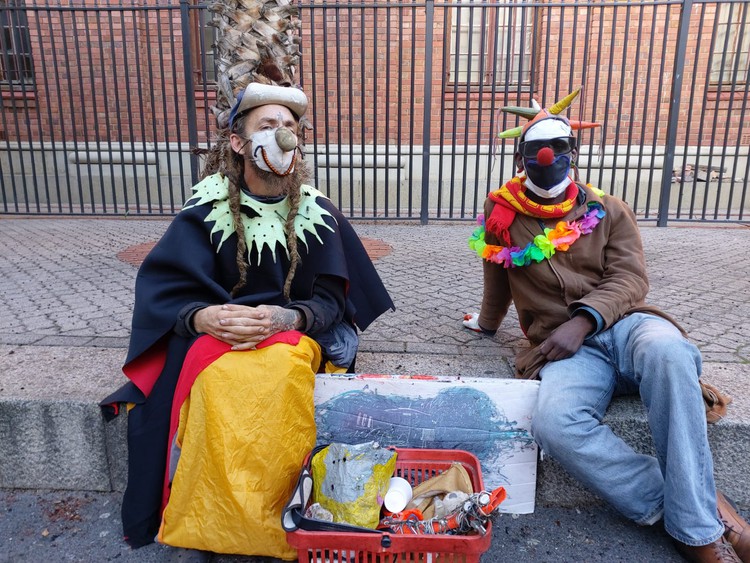 Artists John Brophy and Jessie Tshibambe, residents at the former circus school, sitting outside the regional court in Cape Town in May where their eviction matter is being heard. Archive photo: Liezl Human

A group of people living on property formerly leased to the South African National Circus School in Observatory, Cape Town, have lost a court bid to have some details of the City of Cape Town’s housing report excluded from the record. The report gives details about the occupants’ personal circumstances and the possibility of providing them with emergency accommodation.

The group of about 30 people initially moved onto the premises in 2016 when the circus founder illegally sublet the property, which is owned by the City. The circus’ lease was terminated in 2017. GroundUp recently reported that the residents have since started growing vegetables to feed themselves and surrounding soup kitchens. The group call themselves the Willow Arts Collective.

The City approached the Magistrate’s Court for an eviction order, with the original application filed in September 2019. Before the order can be granted, the City has to compile a report on the tenants’ personal circumstances and to engage with them to find alternatives to eviction.

On 26 May, the Willow Arts Collective sought to strike the Housing Report the City is using in its eviction proceedings. This application was dismissed with costs last week.

In their application to the court, the residents argued that the City should have dealt with alternative accommodation in its founding papers, and not in its replying affidavit to the case.

The group said that the content of the housing report is “deficient”, since the investigation by the City was done in 2018 and that it was an “uninformed process” that “teetered on deception”. They said that information was only obtained from four residents. They also did not want to be relocated to Kampies informal settlement in Philippi, as mentioned in the housing report.

The City, in its reply to this application, said that residents were using the application as a strategy to delay eviction proceedings and “intended to scupper the City’s attempts to evict them from the property”.

In the ruling handed down last week, Magistrate Reaz Khan said that he believed the City did what was required of them to obtain the information on the residents.

Khan said that the information contained in the housing report “is necessary for the court to reach a just decision”.

Khan cited several cases where evidence had been introduced in replying affidavits and this was accepted by the courts.

He gave the Willow Arts Collective until 16 July to respond to the City’s housing report.

A date for the final hearing on the eviction case is yet to be determined.

Previous:  Sanitation worse than ever after floods hit informal settlement