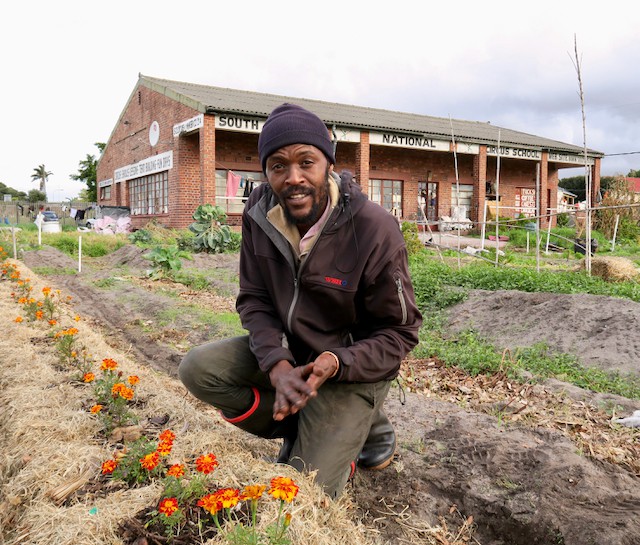 Shayne Taliona gardens on this parcel of municipal land between the Hartleyvale Stadium and the Observatory municipal swimming pool. Photo: Steve Kretzmann

Using a custom-made pedal-powered trailer Shayne Taliona collects kitchen waste from a handful of coffee shops and restaurants in Observatory. He cycles back to a parcel of municipal land situated between the Hartleyvale Stadium and the Observatory municipal swimming pool.

On this site, which used to be leased by the South African National Circus School, he empties the containers of their vegetable peels, fruit rinds, and coffee grinds, which he will use to make compost to enrich the soil and grow vegetables.

Taliona is one of about 30 people who now live at 2 Willow Road in divided rooms in the dilapidated circus school building.

Calling themselves the Willow Arts Collective, they grow vegetables to feed themselves and contribute to surrounding Community Action Networks (CANs) which run soup kitchens to feed homeless and indigent people.

Taliona has completed a permaculture course in organic farming and in summer runs free composting workshops every Saturday in which participants exchange labour for knowledge.

The Willow Arts Collective was founded when the City kicked the circus school off the land in late 2018, after discovering the school was violating its lease agreement by subletting the clubhouse to tenants.

The tenants, including Taliona, who used to pay R500 a week for a room in the clubhouse, formed the collective and drew up a proposal to lease the land from the City and use it to grow vegetables, host workshops, a craft and farmers market, and arts events.

Permanent residency was not proposed. Instead, some people would stay on the property in a caretaker role and act as security.

The proposal was endorsed by 16 community and non-profit organisations including the Development Action Group, Open Streets Cape Town, and the Woodstock Residents’ Association.

But City authorities decided to approach the Magistrate’s Court for an eviction order, with the original application filed in September 2019.

Since then, the number of people seeking refuge on the land has doubled, partly due to the collective being unable to formalise tenancy.

In a press release of 12 August 2020, Mayco Member for Community Services Zahid Badroodien said the land “is located next to the Liesbeeck River and because it is situated within a floodplain it is not suitable for residential purposes, and it would be irresponsible of the City to condone the building of homes on this site”.

However, the City in March this year gave the go-ahead for a controversial R4.5-billion residential, retail, and office development at the River Club across the road. Not only is the River Club site in the same flood plain, it is closer to the Liesbeek and Black Rivers.

The Prevention of Illegal Eviction Act (PIE) requires the City to obtain details of the tenants’ personal circumstances and to engage with them to find alternatives to eviction, or determine how to minimise the impact on their lives should they be evicted.

The details of the tenants’ personal circumstances and alternative housing options, should eviction leave them homeless, would be contained in a housing report, which should be put before the court in the City’s founding affidavit.

On 26 May the Willow Arts Collective sought to strike the Housing Report the City is using in its eviction proceedings.

However, in this case the City submitted the Housing Report with its replying affidavit.

Residents could have challenged the deficiencies in the housing report if it had been submitted in the founding affidavit, but would not have a chance to do so if they were admitted in the City’s replying affidavit.

The City argued the housing report is only required if the eviction application is contested and that the court could provide the Willow Arts Collective the opportunity to respond to the contents of the Housing Report.

The City also contended that the members of the Willow Arts Collective did not engage with the City attorneys when they tried to get information on their personal circumstances before launching the main eviction application.

Magistrate Khan said he would announce his decision on the housing report on 28 June.

Glynnis Bentham is an activist for Sex Workers Education and Advocacy Taskforce and one of the original 12 people who sublet a room from the South African National Circus School and found themselves becoming illegal occupiers when the City annulled the circus school’s lease.

Bentham said she and fellow residents have had only one interaction with City officials.

“They said they found a place for us in Kampies (Philippi). We went there and looked around but said we can’t live here,” said Bentham.

“It’s a squatter camp. I’d rather be on the streets than in Kampies,” said Taliona.

He said that despite being ordered to do so by the court, the City had not initiated any engagement and had ignored invitations to do so from the Willow Arts Collective. There was one meeting eventually arranged, he said, but City officials cancelled just two hours beforehand.

The Willow Arts Collective’s 23-page proposal to lease and upgrade the property had also been ignored, he said.

In its response to our questions the City Media Office stated: “The matter is before the court and the City of Cape Town is guided by the court proceedings and outcomes, and therefore cannot comment on the allegations.”