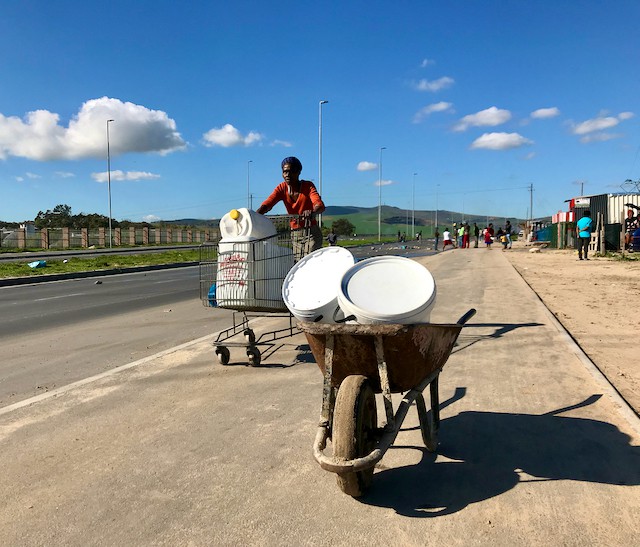 A woman pushes a trolley of water containers she filled at a nearby shopping centre. Behind her protesters angered by a lack of water in Zwelitsha informal settlement can be seen blocking Malibongwe Drive. Photo. Peter Luhanga

Furious residents from Zwelitsha informal settlement in Dunoon near Milnerton, who have been without running water for three weeks, stoned cars and blocked Malibongwe Drive with building rubble and trash on Monday morning .

Hundreds of families have erected shacks underneath high voltage electricity pylons along Malibongwe Drive and Potsdam Road. Some of these were flooded last week when the Diep River breached its banks.

Residents took to the streets on 24 June over water. The City then provided a water tanker, but residents say that was the only time in three weeks.

At about 10am on Monday, there were mostly children hurling stones at cars that drove through a stretch of road the protesters had tried to cordon off.

Residents said that without water there was no proper hygiene and this was is in the midst of the Covid pandemic. They already live in overcrowded conditions.

“You can even smell us; we haven’t taken a bath in days,” said a resident.

To get water to cook, they have to buy it at a nearby shopping centre. They cannot afford enough water to wash their clothes. There is no water at the communal toilets.

Table View SAPS spokesperson Captain Adriana Chandler confirmed the protest was about water. “No injuries were sustained, no property damaged and a case of public violence is going to be investigated. Currently police and other role players are at the scene to monitor the situation,” she said.

Mayco Member for Water and Waste Xanthea Limberg said the City delivered emergency water via trucks in the afternoon of 5 July and 28 June.

“Since the beginning of lockdown, as part of the City’s temporary emergency Covid-19 services, over 213 million litres of water have been delivered, through a combination of trucks and plastic (‘Jojo’ style) tanks to the communities who were unlawfully established prior to the pandemic on privately-owned land, on sand dunes, on train tracks, in stormwater detention ponds, and on other land where there are constraints to the City’s ability to provide conventional services.”

Next:  There is no right to carry a gun under our Constitution