Sanitation worse than ever after floods hit informal settlement 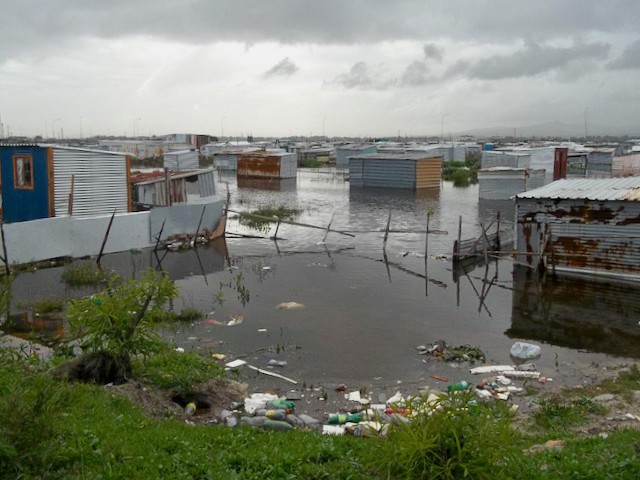 In the aftermath of last week’s flooding, residents of Ethembeni in Khayelitsha say they are struggling to get back on their feet and the sanitation situation in the informal settlement is worse than ever.

The floods struck at a bad time, coming just after people had collected their social grants and bought food for the month.

People’s groceries were drenched, says community leader Nozuko Nogwebela. “The next government grant day is still far off and … their food is damaged.”

“We need food and blankets, but donors are hard to come by,” she says.

Nogwebela says they also urgently need ten to 15 chemical toilets. The open field across Baden Powell Drive where people used to relieve themselves is now flooded.

Human waste mixing with water has aggravated the flood situation, according to community leader Vuyani Madikane. He said a nearby sewage pipe often burst and sent waste down Baden Powell Drive into Ethembeni.

He said the floods had directly affected more than 300 families. Some people had left the settlement or were staying at the shacks of friends.

“We are now placing flood victims in shacks which have been left unoccupied on spots that are not flooded,” he said.

“We want the City of Cape Town’s disaster management officials to come here and witness our dire situation themselves,” he said.

Madikane said they need the City to remove the water and flooded shacks and put down sand before people rebuild their shacks.

Charlotte Powell, spokesperson for City of Cape Town Disaster Risk Management, said the situation was assessed on Friday. “The recently unlawfully occupied area is situated in a water detention pond. A request has been sent to SASSA to provide humanitarian assistance.”

Previous:  Ivermectin: balance of evidence shows no benefit against Covid-19