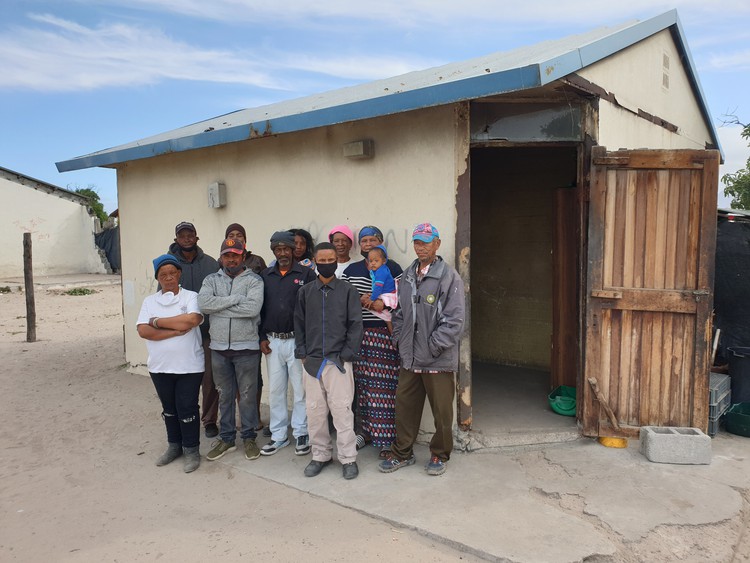 Residents living on Uitsig Farm in the Philippi Horticultural Area say they have no services and would be grateful for toilets. Andrew Erasmus (black shirt) says his house leaks when it rains and is very old. Photo: Mary-Anne Gontsana

Families living on a farm in the Philippi Horticultural Area (PHA) in Cape Town say they have been without water, toilets and electricity for years.

About 40 people live in 11 dilapidated houses on Uitsig Farm, nestled between vegetable farms.

The residents said some of them started living on the farm rent-free while still employed by a previous farm owner. Their families grew and ownership of the farm changed but they were not served with any eviction notices, they said.

Charney Dewee said they have not had electricity since 2008 and no running water or toilets since moving onto the farm. “We use candles for light and for cooking we make a fire or use gas. There was an electrical box in one of the houses but then a fire happened and the box got damaged. From then it was never fixed,” she said.

Dewee said that they collect water from a nearby farm. “We queue with our 5 litre and 20 litre bottles every day at 5pm … We relieve ourselves on the field behind us and at night we use 20 litre buckets that we empty out on the field in the morning,” she said.

Andrew Erasmus lives with his wife and two children aged 13 and 15. He pointed out a part of his roof which is broken. “When it rains the water comes into the house and on windy days, the roof lifts. It has blown off before and I had to quickly put it on again.”

Most of the children who live on the farm attend school in Strandfontein which is about a 25 to 30 minute walk. “Let’s say I leave here to Strandfontein at 1.30pm, I know for a fact that I will get there at 2pm. As you can see we have no schools or clinics or public transport here, we have to walk to Strandfontein to access those things,” said resident Jessica Blaauw.

The children, aged from seven to 15, walk in groups to school. In winter it is still dark when they leave in the morning and sometimes it rains,” said Blaauw.

Most of the residents are unemployed. Some work on nearby vegetable farms. None of them could give GroundUp information about who owns the farm. “All we have heard from different people is that the original owner sold the farm to someone else or is renting out the farm, but that is as far as it goes,” said Blaauw.

Resident, Lya Muller said she would be grateful for any toilet, “even if it’s those pota pota toilets”.

Residents told GroundUp that they did not know who to approach for help.

Community activist Rodney Khan said the ownership of the farm or erf where the residents live is unknown. “I have been working with that community for a while and even though we have tried to find out, we still do not know what exactly is happening with the ownership of that farm. We hear different stories about it being rented, but by who, we do not know.”

Nazeer Sonday of the PHA campaign said he too had heard that the farm had been sold to a developer but was not sure who the developer was.

GroundUp made several attempts to locate the owner of the farm. The City of Cape Town and the Deeds Office were unable to help and searches on Windeed showed several property and business names allocated to the same erf number.

Next:  Hip-hop artist told he must have a new ID number after Home Affairs mix up