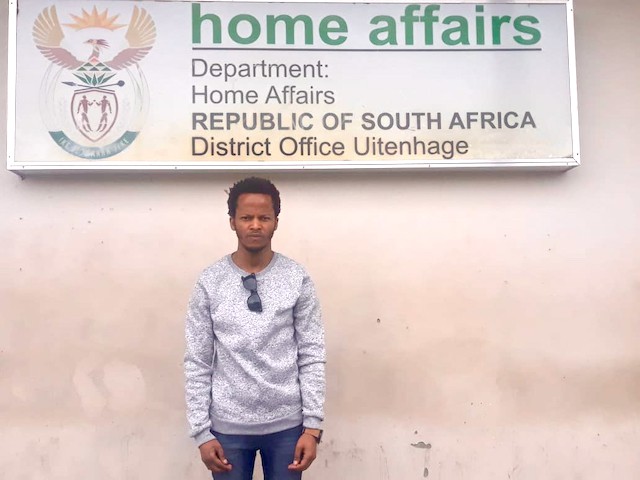 Uitenhage artist Vakele Genu says he has been placed in a “frustrating” predicament by Home Affairs. Photo supplied

Uitenhage artist Vakele Genu says he has been placed in a “frustrating” predicament after Home Affairs decided to issue him with a new ID number and to scrap the one he has had since birth.

The 32-year-old was informed by Uitenhage Home Affairs of his new ID number on 4 November, after a year of struggling to get his ID smart card.

“I told them that I can’t. I have a lot of things attached to my ID number. My academic certificates, my property, everything,” Genu said.

He worries that it will cause issues with SARS, with his title deeds, and with his matric and university certificates.

“He will be issued with a confirmation letter which explains that he holds a different ID number,” said the Home Affairs branch office manager Ncedisa Sigabi.

Home Affairs did not clarify why they had issued him a new ID number.

But Genu is not convinced this will solve his problems. “It doesn’t bother them at all. This is just a small case,” he said.

Genu said that when he went to Home Affairs to get his ID smart card for the first time, he was shocked to discover that someone else had already been issued an ID in his name and with his ID number. The reason for this wasn’t fraud, according to Genu, but due to an “internal error” at Home Affairs, which arose because in November 2019 he’d had to leave the queue when applying for his ID smart card, and another man took his “slot number”.

What the man didn’t know was that the slot number is attached to the applicant’s ID number. “He didn’t know that until he went to collect his ID. He was just thinking that he was cutting the line,” said Genu.

When Genu returned to go through the process of having his fingerprints and photo taken for his ID, he was told that he had already applied for a smart card ID. “Someone … using my name and ID number,” said Genu.

The photo on the ID card, which the employee showed him, was of another person, not Genu.

The Home Affairs branch told Genu that they would deal with it internally and they destroyed the erroneous ID card. He frequently followed up with Home Affairs about solving the issue, and each time they told him that they were dealing with it and would “make it right”. A year later, an official told him that he had been issued with a new ID number.

Genu is known for his debut EP, Conversations in a Black Salon, which was written as a form of protest against femicide in the country. He is an actor, musician, producer, and owner of NoziT World Entertainment Company.